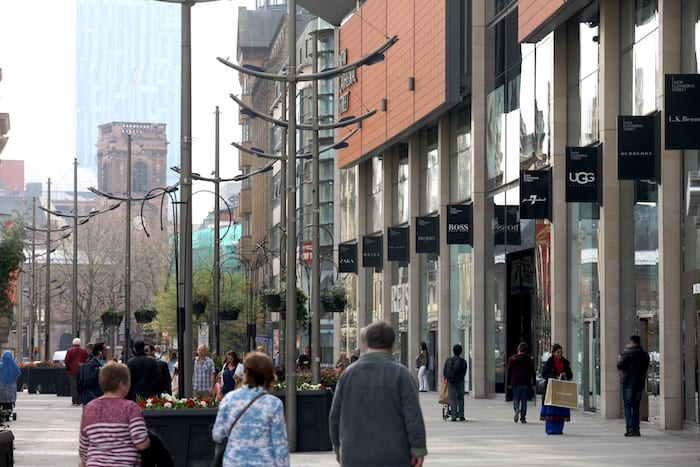 In defiance of doom-laden reports of the demise of the British high street, three of the world’s most famous fashion brands are bringing good news for Manchester’s newest, coolest shopping thoroughfare.

The vote of confidence is led by Ralph Lauren, the iconic New York fashion house, this year celebrating the 50th anniversary of its first store opening in the Big Apple.

The UK’s leading owner, manager and developer of regional shopping centres intu and M&G Real Estates, part of the Prudential group, have announced that Ralph Lauren has signed a lease to open its first Manchester store on New Cathedral Street.

At the same time, Hugo Boss and Reiss have both re-committed to the street on ten-year leases, strengthening New Cathedral Street’s claim to be the city’s premier fashion hub.

New Cathedral Street was created by Ian Simpson and his masterplanners in the aftermath of the IRA’s devastating bomb attack in 1996 and has been a magnet for some of the country’s best known upmarket outlets including Harvey Nichols, Zara, Ted Baker, Paul Smith, Michael Kors and Selfridges.

The redesign of the city centre in the years after the the bomb saw the demolition of an  ugly, 1970’s concrete precinct known as Market Place, the dismantling of the Shambles pubs and their reconstruction near Manchester Cathedral, and opened up a direct route between St Ann’s Church and the cathedral for the first time in more than 100 years.

Ralph Lauren has committed to a 2,280 sq ft store on a ten-year lease where it will offer luxury men’s and women’s clothing including high quality sweaters, shirts, homeware and gifts.

Reiss, the global fashion brand, has renewed the lease on its 6,500 sq ft store after performing well on New Cathedral Street. In recent years, the brand has expanded in America, Australia and France, and will stock stylish, design-led menswear and womenswear.

German luxury fashion house Hugo Boss has signed an extended lease for its newly refurbished, 15,825 sq ft store, which is a new concept for the brand. The chain, founded in 1924, offers sophisticated, modern collections focused on quality and design. Their sharp cuts and clean lines in tailored, casual and “athleisure” collections have won them a loyal following the world over.

“We have been focused on implementing a proactive asset management strategy to attract further luxury, high-end retailers to New Cathedral Street. The lease renewals from Hugo Boss and Reiss are fantastic news, and reflect their strong performance in recent years, and their continuing confidence in the location.”

intu and M&G Real Estate own and manage both Manchester Arndale and New Cathedral Street in a joint venture partnership. intu also owns the Trafford Centre and its shopping interests up and down the country support 120,000 jobs.