Quitters Can Be Winners 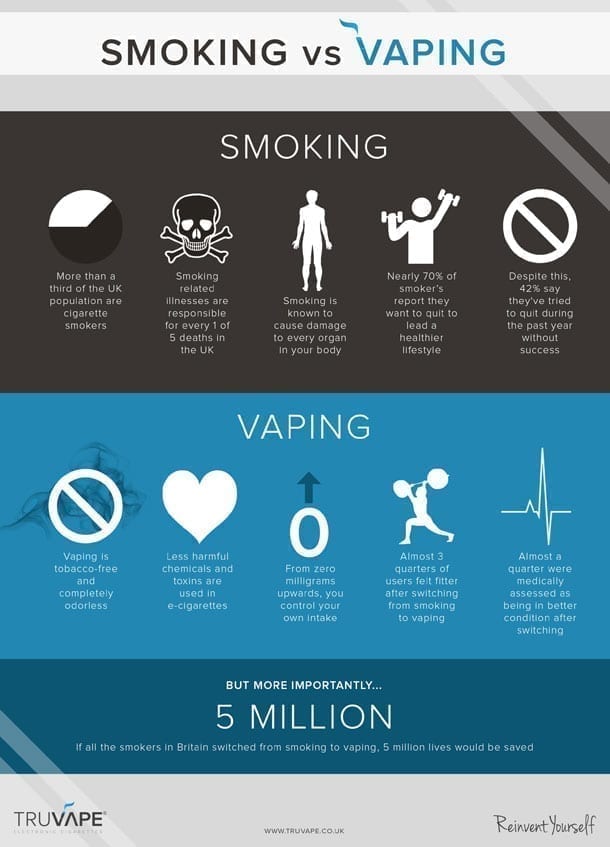 One of the most controversial yet topical stories gracing our website forums, TV stations and other media is the sensation rise of e-cigarettes. Invented in 2003 by a Chinese pharmacist and following rapid evolution in technology, the e-cigarette market as we know it today really entered the UK in 2007. As technology continued to advance, e-cigarette users, or ‘vapers’, began to move away from the ‘cig-a-like’ style electronic cigarettes and towards personal vapourisers and e-liquids.

TRUVAPE launched their online e-cigarette product range in October 2013 and opened their first vaping studio and store in Greater Manchester in the same year. TRUVAPE offer a range of products to suit everyone’s needs and desires, from disposable TRU Simples that look like traditional cigarettes different colours.

We all attempt to lead a healthier lifestyle, be it using the gym more, detoxing, juicing or cutting out alcohol and cigarettes. Many of us may fall at the first hurdle, as sometimes cutting out a substance from our daily routine can lead to cravings and mood swings. E-cigarettes can help with this by providing a healthier, more cost effective alternative to smoking.

Vaping e-liquids can be bought in different strengths of nicotine, from zero milligrams to eighteen, so you can control your own intake effectively. With no tar, carbon monoxide, and far fewer harmful chemicals and toxins used in e-cigarettes, you’re in complete control of what you are putting into your body.

Nearly 70 percent of smokers report they want to quit to lead a healthier lifestyle, and a little more than 42 percent say they’ve tried to quit during the past year without success. The latest figures show there are approximately 10 million smokers in the UK alone, and one-fifth of this number, an estimated 2.1 million are now using e-cigarettes. If all the smokers in Britain stopped smoking cigarettes and started smoking e-cigarettes, it could save millions of lives and many more from serious smoking-related diseases. It’s a massive potential public health prize.

For those who are regular gym bunnies and fitness fanatics who can’t give up tobacco, e-cigarettes can improve lung capacity with almost three quarters of users felt fitter after making the switch and were better able to exercise, with almost a quarter being medically assessed as being in better condition.

It is clear that more research is needed to determine the effect of e-cigarettes, but if e-cigarettes continue to have continued positive benefits and become officially regulated, there should be no reason why they shouldn’t overtake and stamp out traditional smoking.