A quacking time on Good Friday... 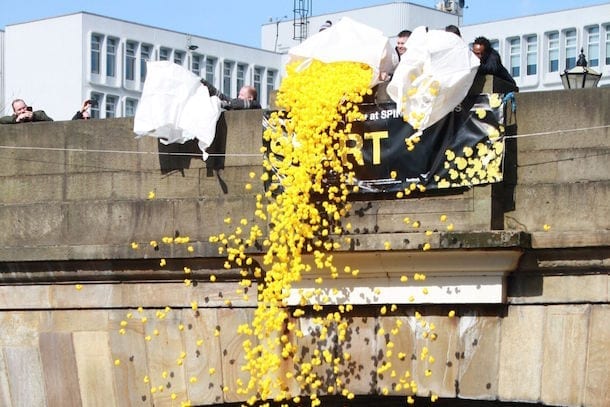 Manchester’s all set for a quacking time on Good Friday!

Spinningfields is once again setting the stage for a day of family fun at The Manchester Duck Race on Good Friday (April 3rd).

Now in its sixth year, it costs just £1 to enter a racing duck. Ducks can be bought online or on the day, with all proceeds going to local children’s charity Brainwave. There will be six winners on the day, with prizes including family tickets to the Opera House, vouchers for Carluccio’s, tickets to the Coronation Street Tour and £150 worth of vouchers for Duck and Cover clothing.

The day also includes a corporate race, in which businesses sponsor and decorate foot high rubber ducks. Participating companies are urged to be as creative and stylish as possible when decorating their ducks, without any modification to enhance the duck’s performance. The race winner will take home dinner for two at Hawksmoor, whilst the best dressed duck will receive dinner for four at Tattu.

A giant inflatable duck, sponsored by Duck and Cover clothing, will take up residence on Hardman Boulevard, and there are a number of additional activities including a hook a duck, cups and saucers, a safari train ride, chair-o-planes and a number of inflatables such as a bouncy castle and slide. As well as the numerous restaurants on site, there will be several food vans selling the likes of candy floss, ice cream and hot food.

Bitter Twisted will be providing a VIP bar on the day as well as a bar for the general public on Crown Square, with a percentage of the proceeds donated to Brainwave.

There will also be performances throughout the day from Play Factore’s dance troupe Superkids.

Free to attend, the race itself will start at 2pm. Heart Radio will commentate on the race, with a few interjections from some competition winners, who will get their chance to comment on the action. New to this year, there will be a robot duck race before the start of the official races.

Ducks can be bought online for just £1 or on the day, with all proceeds going to local children’s charity Brainwave.

4th prize: Tickets for a family of four to the Opera house

5th prize: Tickets for a Coronation Street tour for four