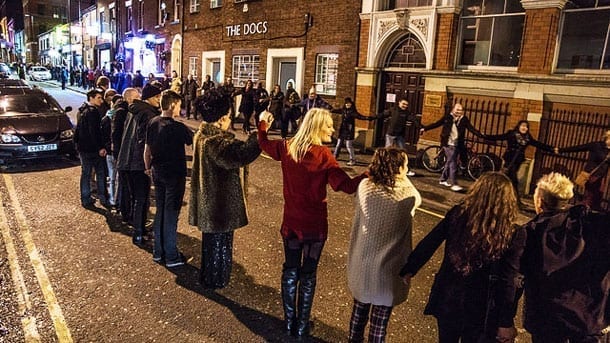 Pride House Manchester launched in fine style on Friday night. The world famous Canal Street hosted a series of events as an alternative opening ceremony, in a mix of camp, high jinks, and moving messages.

There comes a time when a line must be drawn, a point must be made and a protest must be heard.

“…performance, debate, support and ceremony to show solidarity with the LGBT community in Russia…”

The Winter Olympics in Sochi, Russia have generated considerable controversy. Not the games themselves, but rather their hosts, and the treatment of gay people in Russia; hunted, beaten and oppressed – just for their sexuality.

And so the gay community here in our very own Manchester have come together to create Pride House Manchester, a two week long event that will use performance, debate, support and ceremony to show solidarity with the LGBT community in Russia, with an aim to support equality and inclusion in sport and society. 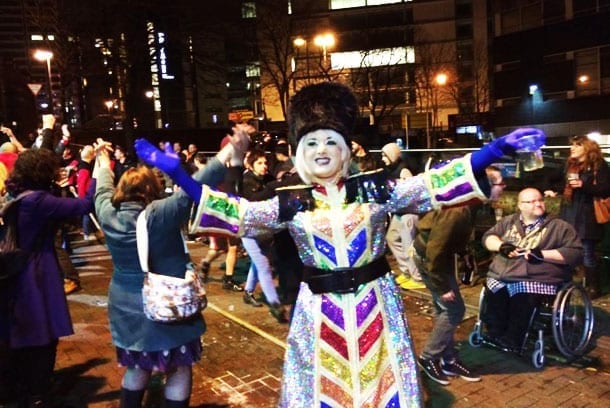 Introducing the event was Taurus bar’s very own Michael ‘Polly’ Pollard, mixing his own blend of serious message with serious swearing, whipping up the crowd which simply grew and grew – 1200 people descended on Canal Street on a cold February evening to show their support for this event, and the message it carried. Of course, all this was followed by an incredible snow storm (nice change from the rain) billowing from the upstairs windows of Taurus, courtesy of another village legend Miss Terry (Jean) Gold of Goldspark Drag Electricians.

Once back to Taurus, the second event of the night, the true show of support began. #sshhi – the Same Sex Hand Holding Initiative was designed to have various bars linked with same sex couples holding hands to show Russian LGBT people it is ok to be gay. What followed is literally the most moving, and probably most important thing I have had the privilege to be a part of. 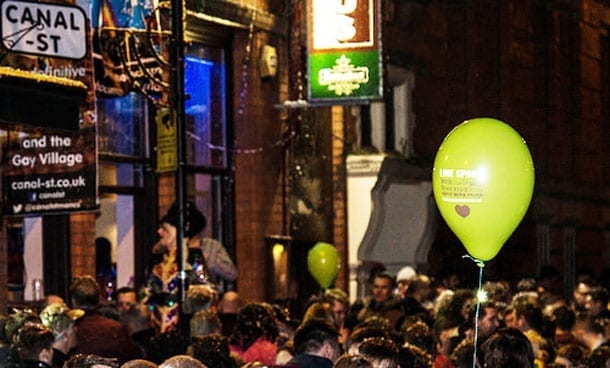 Whilst many of the bars and venues showed their support, the 1200 people that came down to support #sshhi actually created an unbroken ring of people around my beloved gay village. From Taurus, up Minshull Street, all the way down Bloom Street passing Baa Bar, past the iconic Tracey at New York, New York, past The New Union and then the full length of Canal Street with Tony from Via and Mr Poptastic, John Hamilton on the street with their crews.

A solid unbroken ring of support and solidarity – and a message to Mr Putin that he is wrong – it IS ok to be gay and we will not tolerate our LGBT Russian cousins being hunted and tortured for nothing more than the person who they love happening to be of the same-sex.

To complete the evening, what can only be described as the campest competition on earth. Bar none. 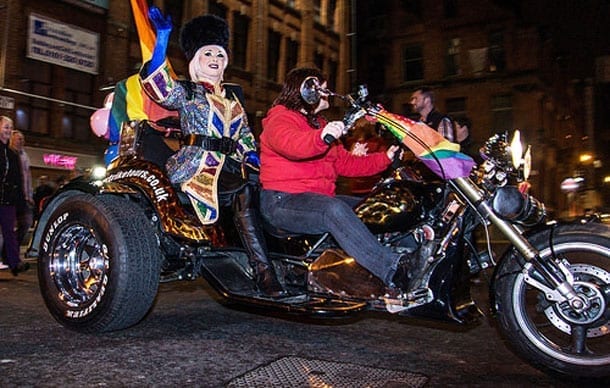 Each year the unofficial opening to Manchester Pride’s Big Weekend is Taurus Bar’s It’s A Gay Knockout.. and so for the Winter Olympics – It’s A Gay Winter Olympics Knockout! Teams assembled outside Taurus to be put through their paces by the Hostess with Mostess Polly – and she’s strict.

From ‘Spooning on ice’, to ‘Get Your Ice in Polly’s Ring’ to the hilarious ‘Throw Your Ice in Jackie’s Bucket’ spectators were treated to much hilarity, all with a bit of vulgarity from Polly. It was the funniest thing I’ve seen in years. Personally I watched from the Royal Box, the window to the rest of you, with the very fabulous Billie Jean, one of the driving forces and creative genius behind the whole Pride House Manchester story. With wine, of course. The finale was a tug of war between the top two teams all started by the queen herself, Misty Chance. Don’t ask me who won, the wine had kicked in by then.

Friday evening showed the village at its best – community spirit, fun and frolics, with a serious message to boot. I have never been more proud to be part of this gay community in Manchester.