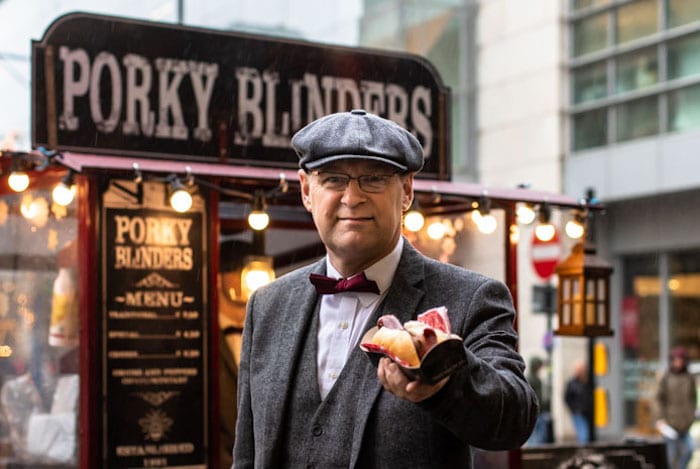 By order of the Porky Blinders… there’s a new look to Manchester’s longest-running sausage stall.

The former Manchester Sausage Company stall on Market Street has rebranded as Porky Blinders – and you’re served your hot sausage by the owner kitted out in full 1920s suit and flat cap inspired by hit BBC show Peaky Blinders.

The stall has been owned and run by Lee Ferguson, 55, from Failsworth, in the city centre for the past 25 years.

But he decided to rebrand after his own brush with the cast of Peaky Blinders when they filmed the gangster drama here in Manchester – and to give a quirky new look to his stall. 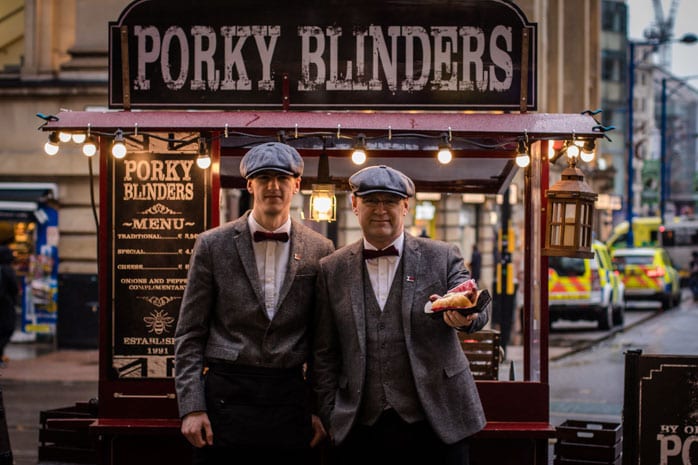 Lee says: “It’s all a bit of fun but it has really got people talking.  People love Peaky Blinders, and when they see us all dressed up they come over for a chat and get their photo taken and then hopefully will buy a sausage too.

“Porky Blinders has got that tongue-in-cheek nature to it. People are laughing about it, we’re all about making people smile.”

Lee has his own insider experience of Peaky Blinders, having worked on security on the film set when Cillian Murphy, Tom Hardy and co filmed here earlier this year.

Lee explains: “I’ve been running the sausage stall since the 1980s, but I had to close for nine months while the tram works were taking place along Cross Street last year, so I thought I’d get another job.

“I got my security licence, got myself a badge, and was asked if I’d like to do security on film and TV work – and lo and behold they put me on Peaky Blinders. I loved it.

“I was looking after equipment more often than not and occasionally you’d look after the actors to take them back to the caravans.

“But sausages are my bread and butter.  Returning to the stall after nine months though, it was like starting a new business.

“So having this little rebrand has worked wonders.  We’ve got our own Facebook page and I’ve even started doing birthday parties and weddings – they all want us to dress up like this.” 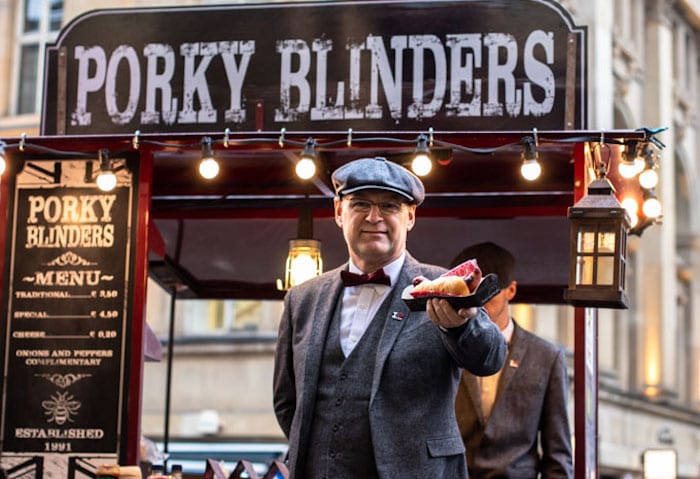 Lee started his sausage odyssey in the city in the 1980s, when he and a friend ran the stall as the Hot Sausage Company on the corner of St Ann’s Square.  In 2001, Lee was relocated to his current spot right at the heart of the bustling Market Street and rebranded to Manchester Sausage Company.

“It’s always been sausages,” says Lee.  “We are the sausage connoisseurs. I do different specials on different days. I’ve just had some chicken sausages on and I’ve just started a special with pulled pork. And it’s all British sausages, so it fits with the Porky Blinders theme.”

With the Christmas Markets in town, you might think Lee would be worried about the weight of banger competition – but instead he welcomes the increased footfall and believes his £3.50 sausages are more than a match for the £5 frankfurters. 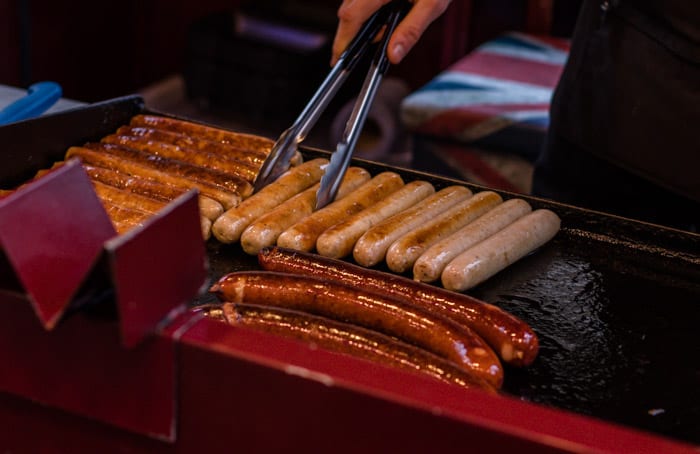 “I actually welcome the markets because it does bring in those extra people to the city, and if I can engage with you with a kind word I could make a customer for life.

“Sausages are everywhere around the city at this time of year, but we always say here it’s all about customer service and supporting a local company. 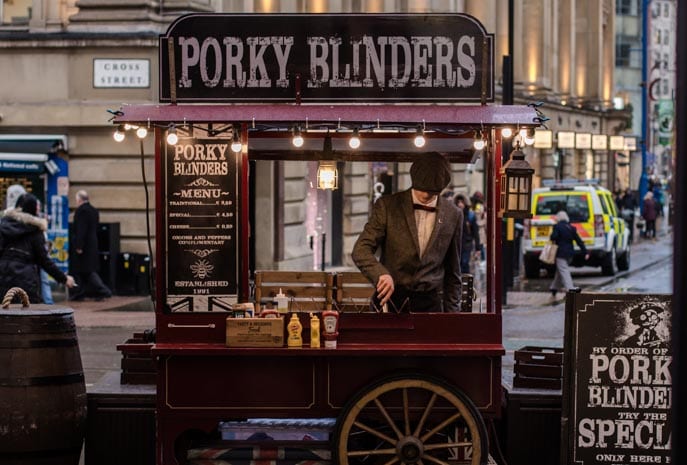 “For £3.50 I think it’s great value for money. You get your British sausage on a fresh bread roll and your choice of onions or peppers.

“I’m a local lad. I’m a grandad with seven grandchildren. I’ve been married 35 years.  Come and give us a try!”

And Lee hopes that his business will continue to flourish in the city.

“We’re here for the long haul. I foresee another 25 years here in the city centre. God willing I’m able to keep working here myself.  Or I’ll have my grandchildren working for me!”