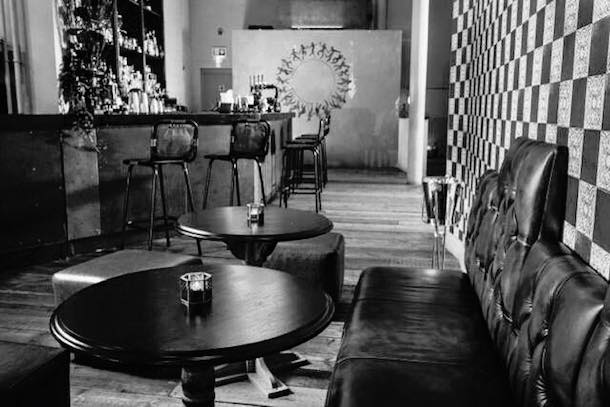 Once upon a time (November 2013 to be precise), local entrepreneur Dan Purnell joined forces with some of the city’s most creative bartenders to bring a new independent bar to Manchester. A small independent, owner-operated bar that offered a truly luxurious experience. A welcoming, accessible, sophisticated bar without the pretence.

With its rustic interior, exposed bricks and comfy, knackered leather seats, Elixir Tonics and Treats brought a little piece of the Northern Quarter to Deansgate. It wowed everyone with its cocktail menu.

Celeb and VIP Mancs of all kinds came and went to the Garden of Earthly Delights to discover the new and exciting things that Elixir had in store.

With its floral mix of violet liqueur, lavender syrup, cranberry & lemon juice accompanied by a chilled prosecco miniature, the flamboyant Forget-Me-Not was popular with the likes of Roxanne Palett and Jorgie Porter

After ten weeks, the bar was voted “Best Cocktail Bar 2014” by Design My Night and had hosted an X Factor wrap party.

Whoever said all good things must come to an end was probably on to something. Because today the folks at Elixir announced on Facebook that the lease on 123 Deansgate won’t be renewed. The building is to be demolished to make way for a new development – “something modern, something befitting of the location” – and they have till the end of June to vacate the premises.

“Our vison just over two years ago was to bring something soulful to Manchester, a sanctuary away from pretence, something real. A place where cocktails were the key to unlocking a door in ourselves and our customers, all we had to do was push. Behind the door we hoped there was a room, without inhibition or exclusion, somewhere that ignited fun, imagination and conversation. What a joy it’s been for us to watch magical nights unfold, faces light up, memories made and troubles forgotten.”

They certainly succeded. We wish Dan, Jessica the very best and hope to see them back in a new location before too long.

They aim to remain open as usual up to and including the 25th June 2016 so why not pop in for tonics and treats and help send them off with a bang.