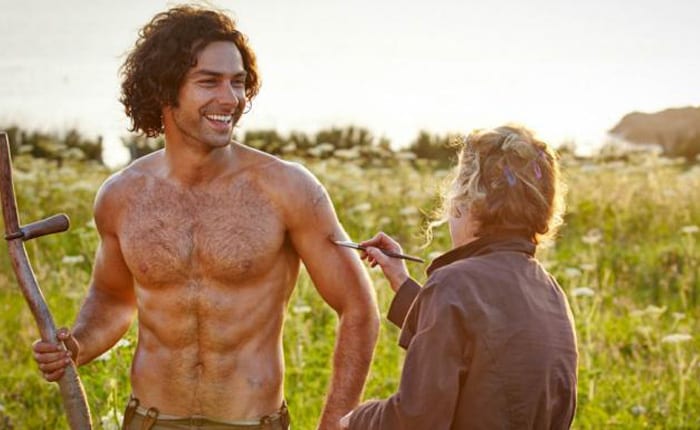 Poldark’s back on our screens, but while fans of the series might be focused on the dramas of Ross, his wife Demelza and the state of leading man Aidan Turner’s undress, none of it would be possible without the efforts of Eccles-born Debbie Horsfield.

As the show’s writer and executive producer, she’s the person tasked with turning Winston Graham’s novels, set in 18th century Cornwall, into must-watch television since the show first aired in 2015.

The mum-of-four might have a close connection to the southwest these days, but it’s the north that’s her great inspiration.

Debbie attended school and college in Eccles and has spoken of her fond memories growing up in leafy Ellesmere Park before studying English Literature at Newcastle University where she graduated in 1976.

Her professional career began in the theatre, where she worked for the likes of Trevor Nunn at the Royal Shakespeare Company before becoming Resident Writer at the Liverpool Playhouse.

In 1985 she was nominated for the Evening Standard Awards’ Most Promising Playwright for her Red Devils Trilogy, and then towards the end of the Eighties made the transition to television, writing Making It, The Riff Raff Element, True Dare Kiss, Sex, Chips & Rock n’ Roll and Cutting It.

It’s no coincidence these dramas were all set in and around Manchester. She’s even revealed her twin sisters, who owned a salon in Radcliffe, were the inspiration for the latter two projects.

“I never worked there, but I loved being one of the customers. I enjoyed going in on a Saturday because it was always packed,” she’s remarked.

“That, and the fact my sisters were involved in these hairdressing competitions, gave me the ideas for Cutting It.”

Given all the contemporary projects she’s created over the years, Debbie herself admitted her surprise when Karen Thrussell and Damien Timmer from Mammoth Screen approached her about adapting the Poldark novels.

“My initial reaction was to think they’d asked the wrong person,” she told the BBC writersroom.

But the screenwriter, who’s received two Bafta nominations (for The Riff Raff Element in 1994 and Cutting It in 2003), headed off on holiday armed with the Poldark books and was “hooked” within three pages.

On her return, she promptly accepted the offer and set about devouring all 12 novels to begin the gargantuan task of adapting them for the small screen.

“I’m from the north of England and everything I’ve done has been set in Manchester, so obviously the speech and the idioms are very different,” she noted in an interview with British Heritage in 2015.

The shadow of the successful Seventies adaptation, starring Robin Ellis in the title role, never weighed heavy on Debbie.

Instead she’s always insisted it was important for her “to do justice to the original material”.

“Winston Graham is a masterly storyteller and the characters are wonderful creations,” she says of the author who passed away in 2003.

The current Poldark series is the fourth and depicts events from the sixth and seventh novels.

“For me the on-going Poldark saga never ceases to excite, challenge and engage,” says the lifelong Manchester United fan.

“As a story with the portrait of a marriage at its heart, sometimes it’s made for uncomfortable viewing. Winston Graham was writing about a real marriage, not a rose-tinted starry-eyed version of one – but that’s what makes it all the more rewarding to bring to the screen.

“The reconnection between Ross and Demelza, the renewed passion, the forgiveness and redemption of their marriage has been hard won and is therefore all the more to be valued and enjoyed.”

For her next project, Debbie has returned to her northern roots, in more sense than one, with Age Before Beauty, a six-part multi-generational saga set in a Manchester salon starring Robson Green and Sue Johnston.

Not only does it mark her return to where it all began on a personal level but marks a reunion for the team behind Cutting It.

“I was thrilled to be working with long-term colleagues Laura Mackie and Sally Haynes again,” says Debbie.

“We’re looking forward to turning the spotlight on the subject of ageing: growing older gracefully – or disgracefully!”

Poldark airs on BBC One on Sunday nights at 9pm. Age Before Beauty airs later this year.