Playful, thrilling and downright delicious: new menu at The Rabbit will take you on a wonderful culinary journey 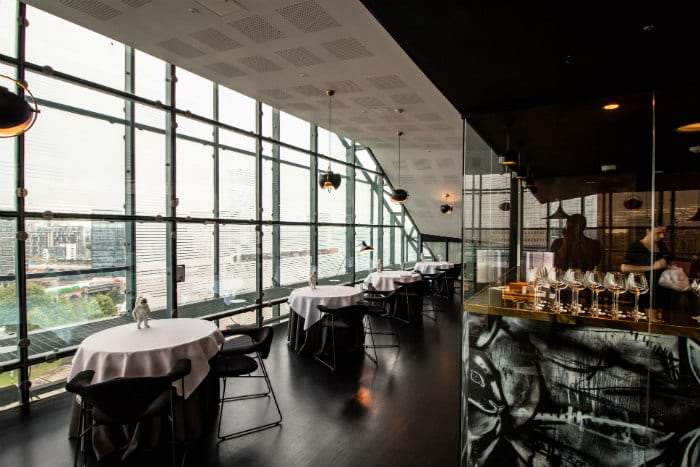 The restaurant formerly know as The Rabbit in the Moon occupies a beautiful space perched above the National Football Museum in the Urbis building, with jaw-dropping views across the city.

There are classic white table cloths, but also mini-astronauts adorning each table. The music adds atmosphere, but isn’t overly dominant. It feels elegant and grown-up, but also fun. It’s exciting. A place where something a bit special might happen. And indeed it does. 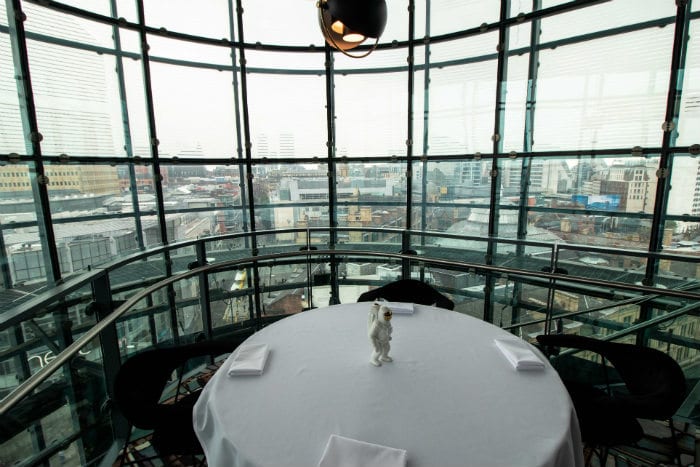 Following the departure of Michael O’Hare earlier this year, The Rabbit continues to operate under the guidance of head chef John Granaghan and front of house Charlotte Rasburn, both formerly of one Michelin star restaurant The Man Behind The Curtain.

Our lunch began with champagne and oysters, followed by fish and meat courses. But it’s not as old-school as it sounds. Far from it.

The fizz is a Ridgeview English sparkling wine from East Sussex, with a hint of strawberries and cream. The Porthilly oyster, a heady taste of the sea with punchy additions of pickled ginger and wasabi leaf, forms part of a pretty-as-a-picture trio of snacks. 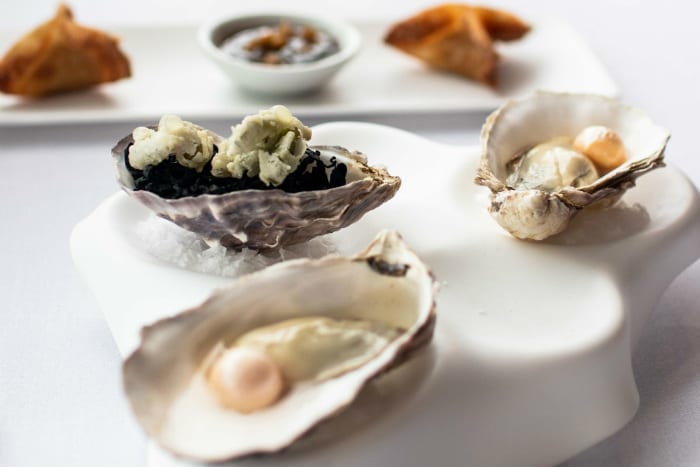 There’s also a crisp lamb gyoza, hot with spicy sambal, served with a sweet and sour dip. A pillowy soft mini steamed bao bun is cutely branded with the Rabbit in the Moon logo and stuffed with smoked eel, creamy avocado purée and oyster sauce.

Stylish, yes. Achingly so. But there’s substance here, too. 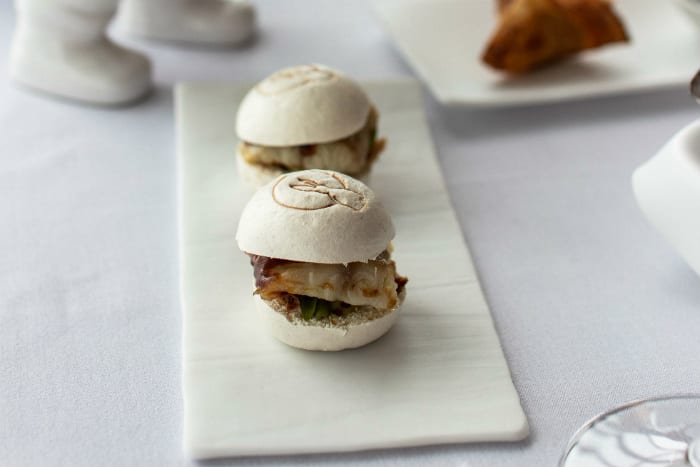 A toasted, buttery brioche is topped with raw Spanish prawn tartare, dressed in sesame oil to give it a nutty flavour. It’s pretty and delicate, served with  a little cup of tom kha gai, a coconutty Thai soup that I could happily drink by the bowlful.

Next up, a Thai-infused lobster risotto with bonito tuna flakes and lobster crisps. An intensely flavoured red bisque is made with the shells, then dehydrated, dried out and baked. There’s a bit of spicy warmth but it doesn’t overpower the delicate lobster. 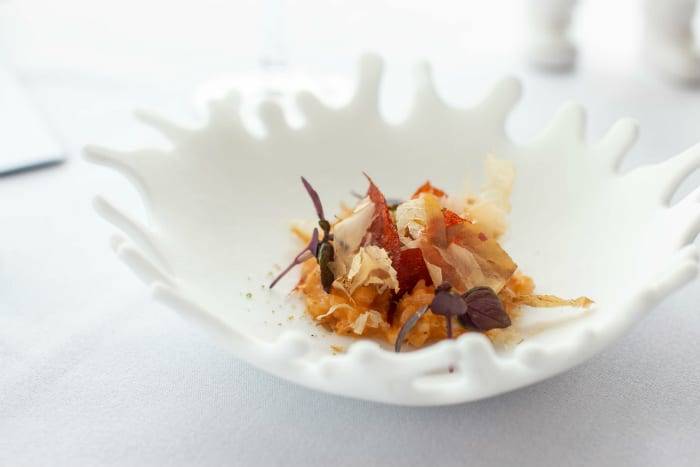 It’s paired with an easy-drinking, fruit-driven Australian red, not too high in tannins, a hint of spice brought out by the mustard seeds in the dish. 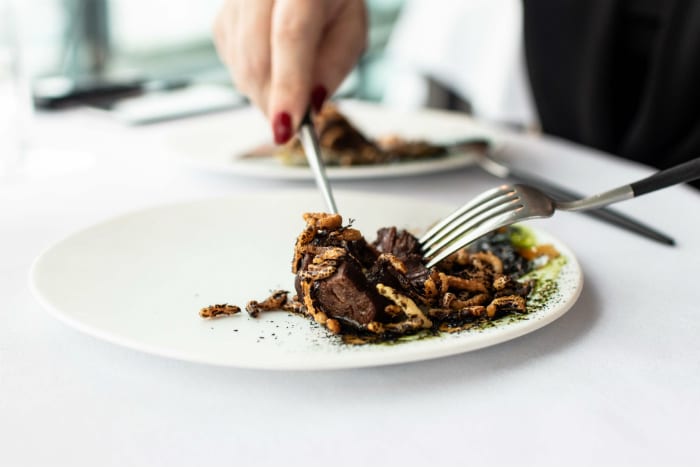 Then a real showstopper of a dish arrives. Iberico pork comes with a Chinese glaze, the fillet and slow-cooked rib accompanied by black XO sauce, pepper purée, braised pak choi and baby corn.

The flavours are familiar, but executed with the highest level of skill and precision. It’s like the best takeaway you’ve never had. I feel a pang of sadness as I’m finishing it that I don’t yet have a date in my diary when I’ll get to eat it again. It’s that good. 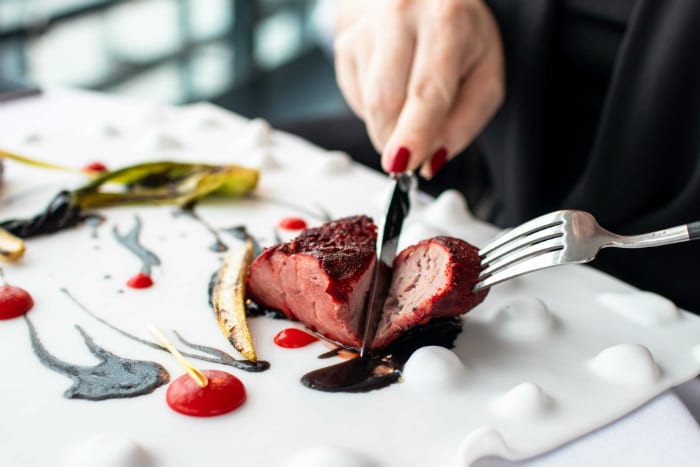 “A lot of the main elements are taken from a Chinese takeaway, just elevated and cooked in a classic way,” says the chef.

It sounds simple, but the talent on show here is striking. It’s clever, but there’s no showing off.

There are two desserts to finish. Campari and pink grapefruit sorbet sits on top of charred pineapple with a white wine sabayon and a shard of smooth dark chocolate. Then comes a modern crumble, intense little spheres of apple, passion fruit and ginger with salted caramel ice cream. 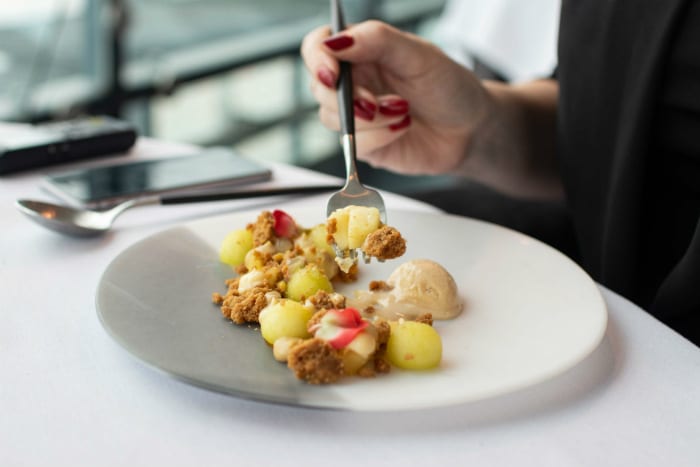 Drinks-wise, the wine list is an interesting mix from Australia, Canada, Italy and New Zealand, which pair well with the tasting menu. Prices start from around £45 a bottle, or £9 a glass.

The Rabbit is open Wednesday to Saturday. It’s £70 for dinner, or £45 for a lighter lunchtime menu (Friday and Saturday only), excluding drinks.