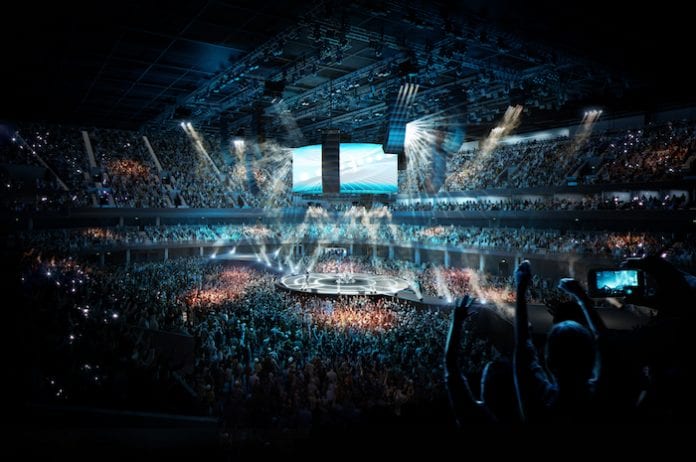 Plans for the UK’s biggest indoor arena have been revealed and, pending approval, it will be built right here in Manchester.

Hoping to support East Manchester’s ongoing regeneration, it will have a capacity of up to 23,500 – outstripping that of the existing Manchester Arena and the 02 Arena in London.

But developers hope that the new arena will attract other live events too, such as international tennis, basketball and hockey games as well as major awards events.

Costing £350 million, its construction at the Etihad is expected to take three years and would be entirely privately funded by American firm Oak View Group (OVG).

They say that the new development will support over 1,000 jobs once up-and-running, with a further 3,500 jobs created during the construction phase.

Incorporating an energy-efficient design, low carbon technologies and waste reduction measures, the new arena would be built sustainably in line with the council’s 2038 zero carbon strategy.

OVG has also committed to investment in “campus-wide cycle facilities and improvements to the main walking and cycling routes into the city centre”  alongside a residents parking scheme and on-site security team.

Design features for audiences and performers with additional needs have been included to help make the venue as accessible as possible.

Developers insist that they will “ensure the entire city benefits from a second arena” with a strategy spanning jobs, skills, education and community initiatives and sustainable transport.

However, there has been concern from other quarters that Manchester cannot sustain two such arenas with Manchester Arena SMG arguing there is not enough demand.

The existing Manchester Arena already has a capacity of 21,000 people – just 2,500 less than that of the proposed new development.

Reporting on the news, the Financial Times commented that the move by OVG will further “deepens ties between one of the world’s biggest private equity groups and the Premier League champions.”

This is because one of OVG’s biggest investors is Silver Lake, who paid $500m for a 10% stake in Manchester City’s parent company City Football Group last November.

If Manchester City Council approves the plans, the FT reports that OVG will pay an annual lease payment worth millions of pounds to CFG.

Given Manchester City’s recent Champions League ban for “serious breaches” of UEFA’s financial fair play regulations, approval for the new site would provide a much-needed income boost for Manchester City at a time when it is facing significant losses of up to £200m.

“We came to Manchester knowing that we needed to develop our proposals in a way that would support the needs and priorities of the entire city and deliver a venue that would enable Manchester to thrive in an evolving entertainment market.

“Through extensive community and city centre consultations, we have understood the local priorities and vision that is transforming Eastlands, along with the ambitions that underpin Manchester’s development as a thriving place to live and visit.

“Our new venue would attract a wider range of the world’s most exciting events and create thousands of skilled jobs, genuine community opportunities, and significant economic benefits. It would place Manchester on the global entertainment map for decades to come.

“We appreciate the significance of our proposals for the entire city. We will present our full analysis of the Manchester opportunity along with our plans and are committed to engaging in dialogue and scrutiny throughout the planning process to ensure a second arena is a win-win for the city.”

OVG plans to submit a planning application in the coming weeks.