Manchester’s permanent memorial to the Peterloo Massacre is now on public view – in time for the 200th anniversary of the epoch-making event.

The memorial, at the junction of Lower Mosley Street and Windmill Street, stands just metres from the heart of the former St Peter’s Field where the massacre took place on 16 August 1819.

It was quietly unveiled on Wednesday ahead of public commemoration events on Friday – although the public have already begun to lay tributes at the site.

A peaceful crowd of 60,000 had converged on Manchester from across the region to call for parliamentary representation. But 18 people were killed and around 700 injured when government forces charged into the crowd on horseback with swords drawn. The event was a defining moment in Manchester’s radical history.

Now, with a memorial commissioned by the council and designed by acclaimed artist Jeremy Deller and Caruso St John Architects, it will be permanently commemorated at last. The memorial is supported by national charity Art Fund. 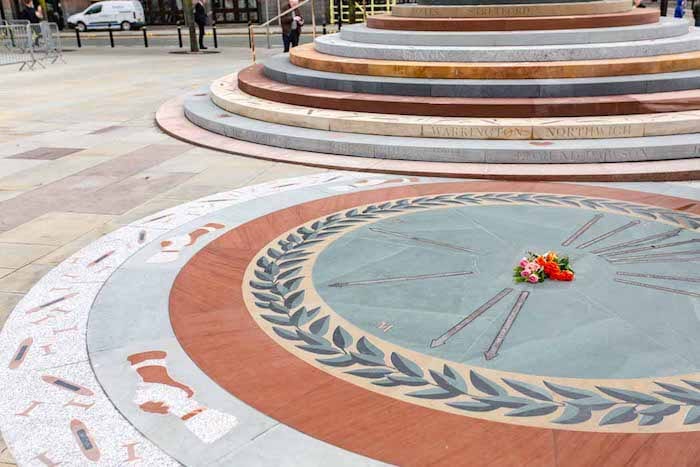 The monument is conceived as a landscaped ‘hill’ made of concentric steps designed to be a gathering place and a platform for oratory.

It references the march of people from surrounding towns and villages to demand recognition of their rights. These place names – along with the names of the 18 men, women and children who died – are engraved on the vertical faces of the steps around the memorial in positions that accurately depict their compass location.

The horizontal surface of the steps also have inlaid decoration, with imagery associated with Peterloo. The design of the top of the memorial also reflects events similar to Peterloo around the world, where peaceful protests have been violently broken up by the state.

A range of stones have been used to create the memorial, including granites, sandstones, slates and marbles from all regions of the UK. The bright range of colours (along with the names, emblems and texts incised into the surface of the stones,) makes reference to the bold graphics of banners calling for social reform traditionally held up by protesters. 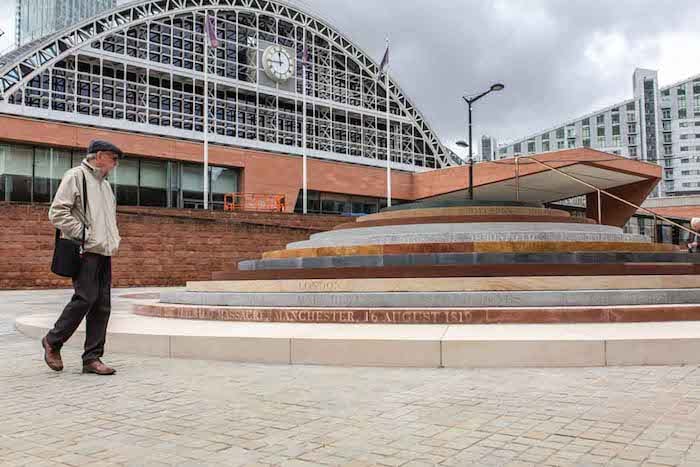 How Manchester will mark the 200th anniversary 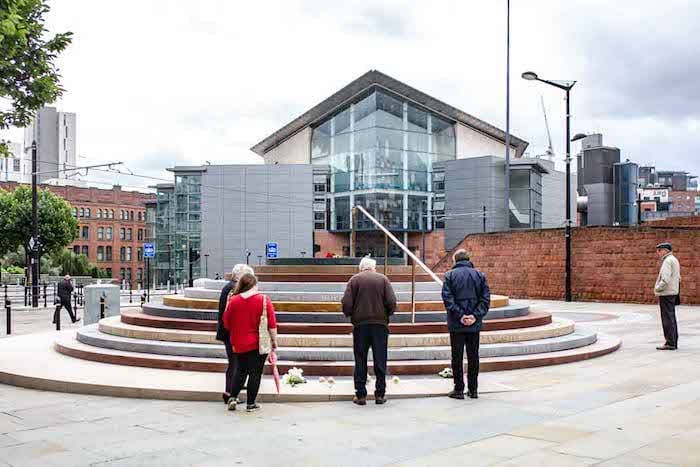 On Friday 16th August, the 200th anniversary of Peterloo, the memorial will be the backdrop to a day of events on the forecourt of Manchester Central which marks the culmination of a three-month programme of commemorative events.

This event, rather than a more formal civic unveiling ceremony, marks the official opening of the memorial. Communities, artists and musicians from across Greater Manchester and beyond will be gathering for a day of performances.

All of the events taking place on the site of St Peter’s Field on 16th August 2019, are being co-produced by Manchester Histories, Walk the Plank and Brighter Sound with support from Manchester City Council. 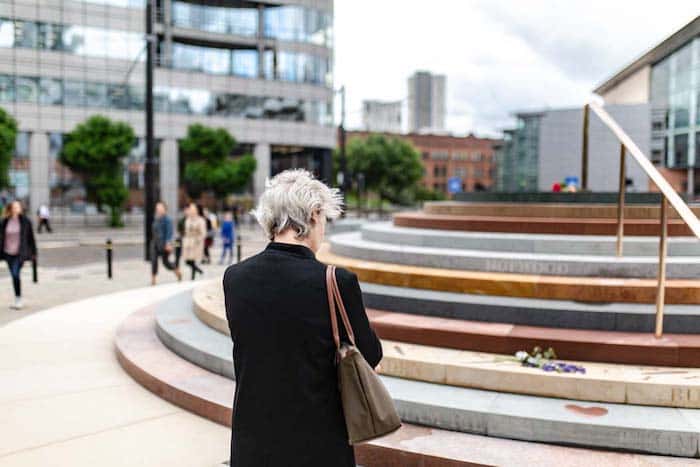 The Council has given a full statement on disability access issues raised about the site.

In a statement it said: “The Council has acknowledged that the interpretation of the design brief, with a greater emphasis on interaction than originally envisaged for a public artwork, meant that not enough consideration was initially given to accessible design issues.

“We have listened to, and engaged with, the concerns of disability access campaigners who have raised this issue, and we are committed to making the monument fully accessible – so that everyone can reach the top.

“Details of a proposal for how this will be achieved are being finalised and will be announced in the next few days. Both the council and Jeremy Deller are determined that the solution will be of the highest design quality and make a positive contribution to the overall appearance of the memorial as well as its accessibility and dialogue will continue.

“The memorial will be there in its current form in the short term – enabling it to form a backdrop to the 200th anniversary commemorations – with the lift modification taking place afterwards.”

There is a private civic reception on Friday 16th August for specially invited guests with a connection to Peterloo, including descendents of those killed.