Peter Street is starting to attract a more discerning crowd than it once did... 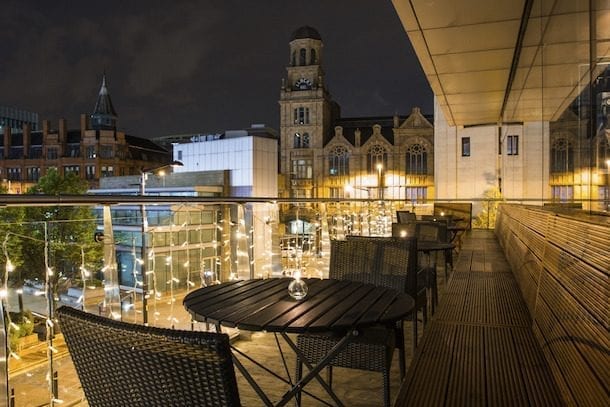 Simon Binns on the last piece in the Peter Street jigsaw, how the area is starting to attract a discerning crowd and why a friend of his rarely bothers with the Northern Quarter at weekends…

Albert’s Schloss, the latest venture from Manchester’s Trof Group, is to open on October 16, and promises lots of ‘super cool stuff’ which is, as yet, top secret.

The add-on to the already massive Albert Hall on Peter Street is significant in two ways. It marks another step for Trof, once a small Manchester indie in Trof, now taking enormo-strides into the territory of the big boys.

Albert’s Schloss will cost £3.5m and is the first project following Trof’s decision to sell a 50 per cent share to Revolution founders, Roy Ellis and Neil Macleod.

It’s also another feather in the cap for Peter Street, which is now starting to attract a more, shall we say, discerning crowd than perhaps it once did. This will be helped by the opening of HomeSweetHome in the Great Northern Warehouse, from the brains behind Almost Famous – another Northern Quarter indie that has been more than happy to stretch its legs across the city.

In fact, it would be an interesting exercise to calculate the total square footage occupied by small Northern Quarter indies like Trof, Beautiful Drinks, BlackDog Ballroom, Solita et al outside their original city centre enclave.

Their customers have willingly followed, too. A friend told me this week that he rarely bothers with the Northern Quarter on a weekend now – ‘too busy, too full of lunatics’ – and goes to Peter Street instead.

It’s great for the regeneration of an area like Peter Street, of course. Local brands that are innovative and tuned in to the developing needs and trends of Manchester are just as likely to take the huge leisure units when they become available, rather than watching them fall to uninspiring national chains, which offer little distinctiveness across different towns and cities.

Following the closure of Taps Pourhouse, VCP Taverns, which also runs popular Epernay champagne bar, will be opening a new bar, No. 1 Watson Street, in October which promises to be “a really relaxed venue, with a Scandinavian, colourful theme.”

There is one sore thumb in all this. The concrete elephant in the room – the former Bar 38/Purity/whatever unit still stands empty. It was bought several years ago by Tokyo Industries, the company that owns Fac251. Then nothing.

But as Peter Street continues to be popular – and offer something a bit more interesting – surely the building will see some movement before too long, either through the current owner or a willing buyer. Personally, I always thought that building would make a great fine dining restaurant. Nice looking, decent views, space for enough covers, separate bar area, nice bit of outdoor space with some greenery. Wishful thinking, perhaps.

It’s the last piece in the Peter Street jigsaw. Albert’s Schloss is going for an upscale, design-led, grandiose venue in the style of a ‘Bavarian pleasure palace.’ Not quite the vibe you used to get in Brannigan’s.

The press and VIP launch for Albert’s Schloss is on October 15, which means we will have plenty of pictures of people with questionable haircuts enjoying themselves. So stay tuned.