It’s been a turbulent few months for Manchester’s hospitality scene. The recent liquidation of MAD Ltd has led to a string of Northern Quarter venues closing down  including Walrus, The Blue Pig, Tusk, Rosylee, Hula and Ibiza-themed club Lazy Lizard – with a loss of over 120 jobs.

And just last month, popular dining destination Manchester House and sister restaurant and bar Artisan entered into administration after what was described as ‘a period of difficult trading’.

The restaurant opened in December 2014, having cost over £1M to develop. It became known for its sushi offerings and proved popular with Manchester’s celebs.   According to its website, the restaurant will be temporarily closed for two months and will reopen after a full refurbishment. 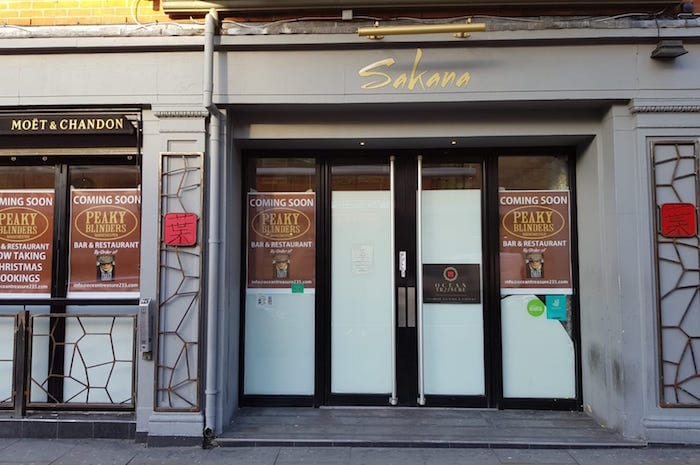 Signs have been put up in the window saying that a Peaky Blinders Bar & Restaurant is coming soon – and we’re excited!

If you’re not familiar with the show, where have you been hiding?

We had a sneaky peek at #PeakyBlinders film set in the Northern Quarter #Manchester to see if we could find #TomHardy pic.twitter.com/zT1UhnbHSF

The programme’s makers have been spotted filming scenes around Manchester, so what better place to open a themed bar in its honour?

It’s is expected to be here in time for Christmas. So what will it look like?

There are currently two Peaky Blinders venues in operation in the UK both owned by the same company.

One based in Southport is a Peaky Blinders bar set in a Victorian canopied boulevard offering B&B accommodation. The bar has 1920’s themed décor with Victorian pillars, over 16 draught beers and an extensive bottled selection – as well as a quirky cocktail list including Angry Arthur’s, The Aunt Polly and Grace’s Secret.

The other opened in Liverpool’s Cains Brewery Village last year and has already become a huge attraction. It’s much larger in size and spread over two floors with 1920’s décor, large images from the TV series and iconic period features.

In 2016, a huge New Year’s Eve brawl took place inside Sakana which, according to police reports, was a ‘gang related dispute’. Footage from the incident showed revellers running for cover as punches, bottles, tables and chairs were thrown around the restaurant and bar, before the violence spilled out onto the street.

You can’t really get much more Peaky Blinders than that. Let’s hope this time the gang disputes stay on-screen.

So dust off your flat caps, brush up on your Brummie accents – and remember, don’t f*** with the Peaky Blinders.