At 9am on Saturday mornings, many people across Manchester enjoy a deserved lie in. But growing numbers now hear the sound of a starting klaxon as the clock strikes nine, and set off running around a local park. Marcus Raymond is one of them 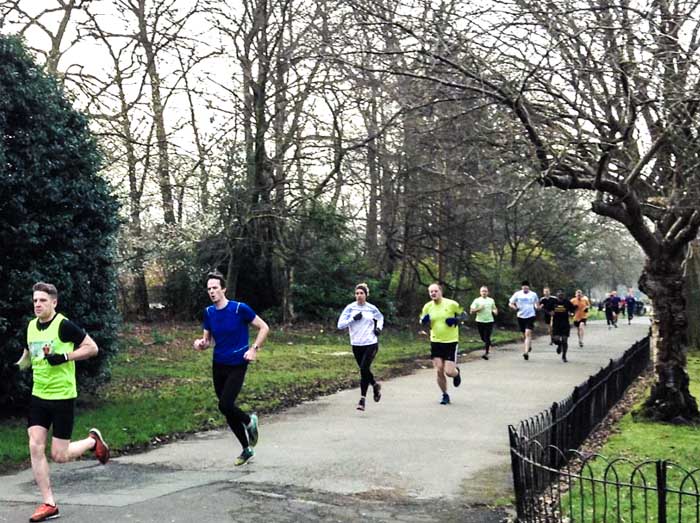 This is parkrun. The parkrun revolution has exploded since its humble beginnings, and now boasts numerous events in parks across Manchester. And I’m one of the diverse, barcode-carrying horde, proud to be up and running so early on a weekend morning.

The format is simple. Free, timed, 5km runs every Saturday. Runners get their barcodes scanned at the end. This records their time, which is emailed to them later. People of all ages and abilities take part.

Some runners push occupied buggies, and still finish up the front. Others take their dogs along. One such owner told me that his pooch “loves the puddles.”

Parkrun began one Saturday in 2004, when injured runner Paul Sinton-Hewitt organised a 5km time-trial run for 13 of his friends in a London park. By 2007, six more events had sprung up. In 2010, the mayor of London provided £130,000 in funding for another 20 in London. It is now a worldwide phenomenon, with events as far afield as Singapore and Russia.

On Saturday, I headed down to Platt Fields Park, my usual south Manchester venue, to see what parkrun had in store for me this week.

My alarm went at 7.30am. The motivation to get up wasn’t hard to find. Parkrun is a much more inviting prospect than making the school bus in time ever was.

Armed with barcodes, my flatmate and I set off at 13 minutes to nine – this always gets us there in perfect time. Brief reflection on this made me feel like a seasoned veteran. I know the drill.

But then I had to pinch and remind myself that seasoned veteran is far from accurate. This was only my eleventh parkrun. Some participants have upwards of 100 runs to their name.

One such stalwart – Platt Fields legend Naz Zameer – celebrated his 250th parkrun in early February, becoming the 475th member of the ‘250 club’. Fellow runners baked him a cake and even had masks of his face made to commemorate this milestone.

Having reminded myself of my relative newbie status, we headed down for the pre-race huddle. The turnout was good, runners awaiting their brief like a fluorescent-dressed army.

“Do we have any first-time runners today?” asked this week’s race coordinator. Numerous  hands went up and, as always, they were welcomed into this quasi-cult with applause.

“What about tourists? Has anyone travelled far to take part today?” This question is usually met with jokey replies – “Salford”, “Stockport” – as well as proper answers. One genuine visitor to Manchester this week was from Hull. Their thunder was stolen, however, by someone from Hamburg. On my first parkrun, a man from Australia was in attendance.

We were then advised that the ‘alternative route’ – often used of late to allow runners to avoid particularly mud-ridden areas of the park – would be used this week. ‘Pacers week’ was then announced, a monthly occurrence where Chorlton Runners Club members volunteer to pace the rest of the pack. If you have a time in mind that you would like to finish in, you try to follow the person with that number on their back.

The throng then turned and energetically jogged to assemble at the start line. Ready? As the klaxon went, the usual loud and simultaneous chorus of stopwatches beeping was somewhat subdued. Ah yes, pacers week.

We were away, and coursed around the pond perimeter, before taking a sharp left towards the woods. Thankfully, as we ran beneath the trees, the puddles weren’t as pungent an obstacle course as usual.

I learned early in my parkrun career to run right through them, after a man had shouted “it’s only water lads” as some of us tiptoed around. He had charged through like a juggernaut, splashing us all.

Coming out of the woods and onto the concrete paths, I stepped things up a little, gradually overtaking a few and catching up with the man-and-dog combination I mentioned earlier. The hound showed no signs of stopping.

With a personal best time of 21.18 – and for all the good-natured spirit at parkrun, people are competitive about bettering their times – I could see the 22 minute pacer up ahead, but struggled to close the gap between us.

We weaved in and out of trees and paths, and come the 4km sign, my watch and hazy vision suggested it would be a tall order to grab myself a new ‘PB’. As I hauled myself onto the final straight, I checked my watch again.

Sometimes, at this stage, a time check provokes me to sprint finish. In an early parkrun, a boy around half my age (I’m 24) breezed past me at the last, with an effortless nonchalance that I now aim to emulate. But I wasn’t close enough to PB territory to find that extra little bit of energy to power home this time.

As I crossed the line, I stopped my watch – 21.55. I felt a little disappointed as I queued to have my barcode scanned. But then I looked up to watch the other finishers, and witnessed something.

The schoolboy and the man-with-dog were neck and neck, and flashed a glance at each other with metres to go. As they crossed the line, they lurched forward like 100m runners, before sharing a smile.

Suddenly, my quest for a PB vanished into irrelevance –moments like this are what parkrun is all about.