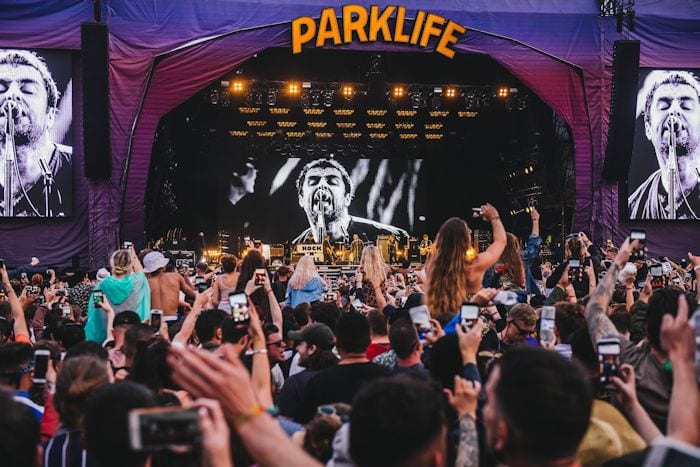 Parklife 2018 brought glitter, wellies and football chants galore to Heaton Park. Whilst Saturday boasted the talent of The XX, Lorde,  A$AP Rocky, it was Sunday that celebrated some of Manchester’s finest.

Even before boarding the packed Bury tram to Heaton Park, there was something in the air that suggested that it was going to be a day unlike any other. People flocked to the sunshine-filled park, cracking open a cold one and getting down to the beats of the DJs who had given up their Sunday to please the masses.

On the Main Stage, however, something very different was going on. Manchester’s pride and joy, The Piccadilly Rats, opened up the stage in their own unique style. People knew what to expect – renditions of rock and roll classics and dancing that kids of today could learn some lessons from.

Offering the buskers of Manchester a place to showcase what makes Manchester’s streets so positive was the umbrella on top of the cocktail (priced £8 during the weekend). What other festival would do this?

As the grey clouds gathered, with people spending their beer money on raincoats and plastic ponchos, Everything Everything took to the stage to spread some Manchester love.

Donning grey jumpsuits, their surreal stage presence had crowds rushing to catch a glimpse of the band who soundtracked their youth.

Distant Past and Regrets were the highlights of their short but pleasurable set. Tunes which have had great success were met with a great reception, the crowds bouncing off one another to the techno-infused indie anthems.

“We’ve just come from Manchester in Houston. We all know which Manchester is better,” announced lead vocalist Jonathan Higgs. You know already what sort of reaction that got.

The set ends with the usual “see you soon Manchester.” Yes you will, Everything Everything – they’re headlining Neighbourhood Festival in October if that’s your cup of tea.

Four Tet, Bicep and Solardo do bits whilst it chucks it down, giving the masses a safe place to rave under the shelter of festival tents. The brave ones who embraced the Manchester weather headed to the Main Stage to pitch up ready for Liam Gallagher.

After CHVRCHES’ electrifying set, crowds of bucket hat wearing, England shirt wearers flocked to the Main Stage, just as the rain started to die down.

Liam Gallagher strolls on stage, parka on and maracas in hand, ready to show the majority of the young audience members what a real rock n roll star looks like.

Rock n Roll Star kicks off the set in Manchester style, pints thrown and all. Without considering a breather, LG unleashes Morning Glory, a track that the crowd were ready to throw themselves about to.

This gig wasn’t like any of his others. It was only 9 years ago that Oasis performed at Heaton Park and six years since Beady Eye supported The Stone Roses at the same location.

It’s a momentous moment when you can go from headlining the park with a band to attracting a similar sized audience who want to listen to you as a solo musician. The magic of Liam Gallagher.

“I’ll play a few new songs before going back to the future,” announces Liam. Tracks from his debut are styled perfectly between old hits Wall of Glass and For What It’s Worth causing a mass sing-along.

Supersonic and Cigarettes and Alcohol follow whilst he is joined on stage by old friend and band member Bonehead on guitar. It’s his Oasis tracks that get the folk excited.

“I want to dedicate this song to those who died in the Arena attack” says Liam emotionally but in his own charming manner, followed by, “I’m going to need some help singing the high notes, I know a few United fans will help with that,” which was received with roars and boos.

Live Forever is done emotionally, the crowd singing their hearts out united, no matter if they’re blue or red.

Liam prepared to leave the stage, wishing everyone gets home safety before remembering what some of the crowd really wanted.

“You want Wonderwall, don’t you?” They got what they wanted. Liam didn’t even need to sing the chorus. The masses did that for him. He left the stage in style. He has become the King of Parkalife.

Skepta closed the festival – a hit, showing that festivals aren’t all about indie bands.

Two lessons we learnt from Parklife 2018. One is that Manchester music will always warm the hearts of festival-goers (and make them lose their voices from singing so loud). And  two, cycling shorts are fashionable these days…