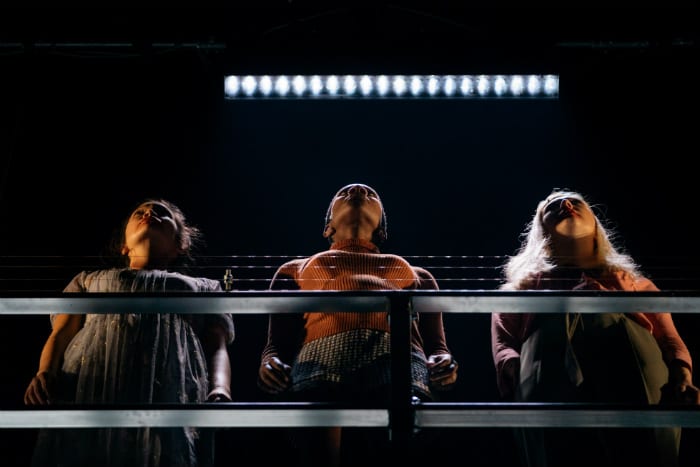 Othello and Macbeth: two plays renowned for their epic portrayals of jealousy and revenge. Plays about men and women, about sex and violence, about prejudice and power. The themes are timeless. But do they still speak to a modern audience?

The very titles of the plays suggest that these are men’s stories. But the world premiere of othellomacbeth at HOME offers a unique retelling in which the voices of some of Shakespeare’s most iconic female characters are brought to the fore.

Director Jude Christian’s audacious new two-hour staging keeps Shakespeare’s words and the plot is largely faithful to the text. But the editing and staging highlights the perspective of female characters in a visceral, thought-provoking and very modern way.

Nine actors play roles in both plays in this production by HOME and The Lyric Hammersmith which has been given the seal of approval by the Royal Shakespeare Company.

The first half is Othello. Traditionally viewed as a play about racism and jealousy, in this new interpretation it becomes a play about two women, Desdemona and Emilia, who are murdered by their husbands.

“It is inconceivable that you would put on a play now about a woman being murdered by her husband and you would name it after the husband, dub him the tragic hero and give him 70 per cent of the stage time,” said Jude in a recent interview in The Times.

The play starts with a song. “Ain’t it always about a woman,” the lyrics go. “Isn’t that how the story goes.” The stage is set.

Desdemona (Kirsten Foster) is passed from bitter father Brabantio (Paul Courtenay Hyu) to new husband Othello (Ery Nzaramba) with a warning: “Look to her Moor, if thou hast eyes to see. She has deceived her father, and may thee.”

There is no truth in the cruel line – Desdemona is a loving and faithful, if naive, wife – but the seeds of doubt have been planted, and scheming Iago is ready to employ them to devastating effect.

As the action unfolds at a relentless pace, Iago manages to implicate a soldier, Cassio (Sandy Grierson), in an illicit affair with Desdemona, first getting him fired, then encouraging the soldier to plead his case with Desdemona, who agrees to help.

The more Desdemona tries to convince her husband of Cassio’s worth, the more he believes they are having an affair. An accidentally dropped handkerchief becomes proof, albeit false.

This production is designed by Basia Binkowska, and the set is striking. With a brutal metal wall pushing all the action to the front of the stage, it’s claustrophobic, and each impact and act of violence leaves a permanent imprint on the cold steel sheet.

As the first half comes to an end, there’s a clever slide into Macbeth as the wronged women of Othello rise to become the three witches. “When shall we three meet again?”.

The witches, carrying the experiences of Desdemona, Emilia and Bianca, go on to assume more prominent roles in the Macbeth portion of the production, which forms the second half.

The women’s revenge on a world which has treated them so cruelly takes on a new dimension as they orchestrate Macbeth’s fate from a raised bridge.

And again, women are given more prominent roles. Lady Macbeth’s suicide – spoiler alert – takes place onstage rather than off. She is cleverly given lines from Othello – “put out the light, and then put out the light” – which lend a tragic weight to her situation.

“You’ve heard this story before,” the song continues in the second half. “It’s been told, it’s so old.”

And taking the choicest bits of existing works and using them to create a new story has been done before, of course. Many of Shakespeare’s own plays were based on older stories, and numerous works of art created since have been based on them.

But the fusion of these two plays is inspired. It highlights the parallels between them whilst also turning them into something new. The stories feel more relevant now than ever.

HOME and Lyric Hammersmith’s production of othellomacbeth runs until 29th September at HOME before moving to London.