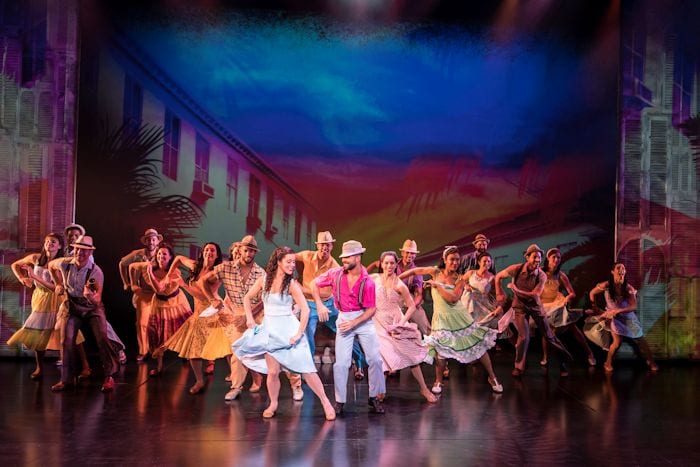 A good biographical juke box musical needs conflict or drama to keep the momentum going when a greatest hit is not being sung.

Beautiful sees Carole King as an underdog who has gotten used to penning amazing songs for other people and being turned down.

Jersey Boys has shady deals and a Goodfellas style subplot and Tina Turner’s life has been such a rollercoaster that she could have her own ride at Blackpool’s Pleasure Beach.

With these shows, audiences get a two for one deal – strong narratives to support the songs.

On Your Feet explores the rise and temporary fall of Emilio and Gloria Estefan and The Miami Sound Machine. If you have seen these two interviewed, they are really nice and decent. They have a great sense of humour and get on really well.

So where is the conflict or high drama for audiences to get their teeth into?

They made history by becoming a crossover band selling millions of records all over the world, when the bigwigs in the record industry said it couldn’t happen. They achieved what was once thought to be the impossible, selling their Latin flavoured music to a mass audience, paving the way for Enrique Iglesias, Shakira and Jennifer Lopez.

The first half of the show is preoccupied with this development so we see very long scenes of the two trying to sell their music to disinterested folks, in search of a ‘yes’ moment.

We also flash forward and get a very strong hint that Gloria does not want to get on the tour bus because she is really tired. This plays out like an episode of Casualty. In other words, even if you did not know that she was involved in a horrific coach crash, the dialogue leads you there.

And that is part of the problem with this show. There is so much exposition that Emilio is reduced to a character who acts a cypher for Gloria. Essentially, this is her show and he is just there to tell you that.

The songs should get the audience going, as there are plenty of them and the early material has the feel of Buena Vista Social Club and should take you to sunnier climes on a cold Manchester night.

But they keep stopping and starting so that we can hear Gloria say she is tired of touring or fed up with her controlling mother.

None of this feels very real, as the grit and determination of struggling against adversity is missing. Sure, there is the infamous coach crash, but the way this is executed has the feel of a very old TV movie.

Alexander Dinelaris’s book has all of the clichés of a biopic movie, and at times it feels like a spoof because it is so predictable that it fails to surprise you at every single turn.

Thankfully there are some great performances to turn the heat up and ensure that some of these rhythms are gonna get you.

The stand out performer is Madalena Alberto as Gloria’s mother, who brings intensity and heartache as a supremely talented woman who has kissed goodbye to her dreams for her family. She rises above it and moves you even when the book resorts to clumsy dialogue.

The ensemble are pretty incredible. They and the band have the ability to hot things up and make you remember why you are here.

Sergio Trujillo’s crazily good choreography gives you sultry salsas and makes you want to get up and pretend you’re competing in Strictly Come Dancing.

Philippa Stefani and George Ioannides makes an attractive couple and they capture the spirit of this warm and hard-working couple who have achieved global success.

But On Your Feet is very earnest and self-congratulatory. Where there should be high emotion, there are Coca Cola advert style numbers.

Coming Out of The Dark, for example, should be empowering but feels so corny that you half expect the cast to reach for their lighters and sway. And then they almost do that, leaving you sniggering instead of feeling teary.

If you’re a fan, you’ll get the hits and go home happy. But as a musical it feels underpowered. One of the Miami Sound Machine’s early hits was called Dr. Beat. This show needs more beats, more heat and something to get you out of your seat and on your feet.

On Your Feet is at The Palace Theatre until 2nd November.