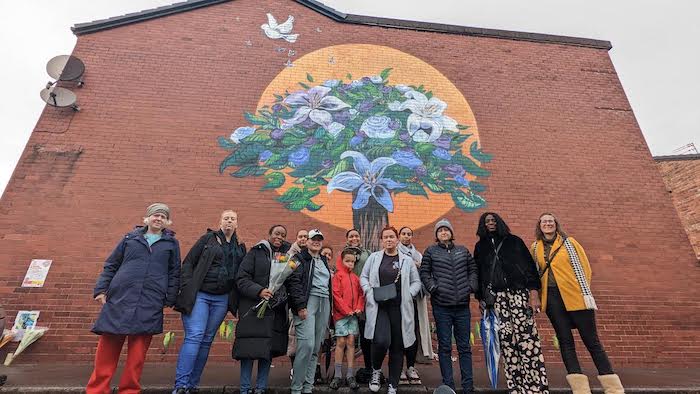 There are two murals, the first of which has been painted on the outside of Norton Street Care home, where 16-year-old Rhamero West was fatally stabbed in September 2021.

The second is on a residential property on the corner of Howarth and Prestage Streets, in remembrance of  a local 18-year-old who died in a police chase in May that year.

The murals are a joint effort between professional artists and local residents to create the works.

The pair of artworks are new additions to the OT Art Trail, which was launched by community project OT Creative Space last year. They were funded by a Standing Together grant from Trafford Council.

Creation of the first mural, called A Better Tomorrow-Together We Stand, was overseen by Kelly Brown, mother of 16-year-old knife crime victim Rhamero, known as Mero.

Kelly and members of the Old Trafford community worked with Whalley Range artist Amy Coney to produce the design.

At the last minute, Kelly decided to clamber up on a crane to spray paint the purple heart that represents her son herself.

She said: “I knew I wanted a memorial to Mero and I couldn’t have asked for anything better than this.

“Amy has incorporated everything that I asked for: the circle represents my son and also the sun in the sky.

“The purple heart, which I sprayed myself, is also Mero.

“It’s beautiful, absolutely breathtaking. You have got to see it in person. Pictures don’t do it justice.”

Kelly said that she now feels ‘more at ease’ in the area, as the artworks have helped ease the fear she used to feel when she walked past the place where her son was attacked.

“I used to fear going on to Norton Street,” she said, “reliving everything that happened, but now I find a little peace and comfort.

“It shows me how amazing the community of Old Trafford is. After what happened to Mero, the communities have really come together.

“So many people have supported me, but in particular I want to mention Caron, Kate, Maggie, Riz, Mustafa and Yousef.”

The artwork is accompanied by a piece of spoken word poetry by knife crime campaigner Quinton Green, who Kelly reached out to after the attack.

“Quinton Green is amazing for putting together the spoken word for me,” Kelly said. “He really means every word that he speaks for my baby boy.”

Caroline Harleaux and Lee Andrews approached OT Creative Space to ask for a colourful mural to be created on the side wall of their end terrace.

The gable end had become a target for graffiti after the nearby death of an Old Trafford teenager in a police chase and the pair felt an artwork would be a more fitting tribute.

The psychedelic-inspired mural, called Can I Kick It?, features bees, rainbows, butterflies and two cats having a friendly kickabout, all painted in bright pastel shades.

It was painted by Manchester muralist and children’s book illustrator Melanie Williamson.

Melanie, who is best known for illustrating the Pirate Pete and Princess Polly and Billy and the Mini Monsters series of children’s books, said: “Lee and Caroline wanted something that both local children and adults could appreciate, seeing as it’s a space where they hang-out and play around – something bold, and cheery and full-on psychedelic with colour.

“We gathered ideas of what animals and characters were popular at the residents’ meeting, and it was such a fun experience interacting with all the locals and passers-by.

“Everyone has been so friendly and says the mural really cheers the place up.”

Caroline said: “We wanted a bright and colourful mural to put a smile on people’s faces, something full of imagination that could talk to kids and grown-ups.

“After the first consultation with the local residents, it was obvious that artist Melanie Williamson would be the one to bring this to life.

“The big city and the towers are there in the background, but really, it is all about the characters.

“They’re getting on with their lives: playing footy, listening to music, falling in love, catching up and chatting. It is a very happy place.

“The mural is named after a track from A Tribe Called Quest, a New York hip hop group formed in 1985.

“They were very inspiring to a lot of young people, who looked up to them as positive role models and artists who built up their success from scratch.”

The pair of artworks are new additions to the OT Art Trail, which was launched by community project OT Creative Space last year.

They were funded by a Standing Together grant from Trafford Council.

Lynda Sterling, OT Creative Space, said: “When we launched the art trail last May, it was very well received by the local community. People in Old Trafford have taken the artworks to heart and appreciate the colour, humour, creativity and individuality they represent, qualities which are abundant in the local community.

“And so when Lee and Caroline, Rhamero’s mum Kelly and other local residents asked me if we could develop two new murals to commemorate two young men I was only too happy to help.

OT Art Trail was launched in May 2021 by Lynda Sterling of community project OT Creative Space and funded by Arts Council England.

The initial phase saw six large murals painted onto walls and buildings around the area, including in Seymour Park and on Ayres Road.

The art trail total now stands at nine and a route map marking out each of the artworks can be found at https://otcreativespace.co.uk/otarttrail/