If you thought Koffee Pot was just a cafe, think again, because things are changing at the Northern Quarter institution- a new menu, street food traders, and a brand new bar. They’re even putting on bands for Dot to Dot festival! 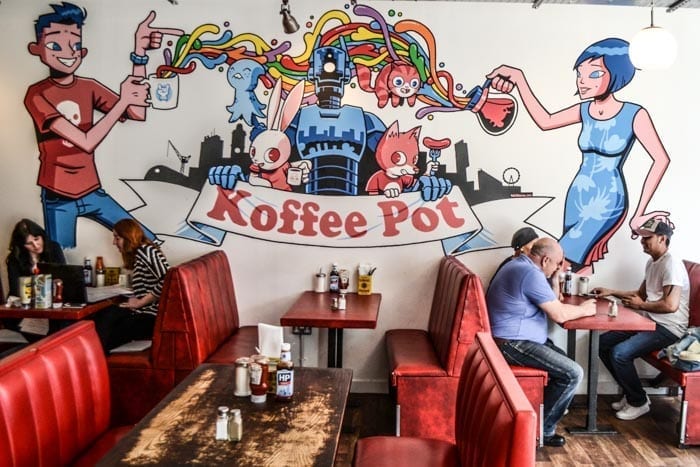 Koffee Pot has always stood out in the Northern Quarter. The Oldham Street diner is a no nonsense go-to for those wanting a generous helping of something hearty and wholesome. A a true original in the area.

Having relocated from Stevenson Square, owners Sam Dunwoodie and Chris Devlin have been looking to indulge their love of street food by opening up the space to the independent traders we’re all becoming so fond of.

“Both myself and Chris are very much into the street food scene,” says Sam. “We regularly go to the various markets around Manchester and Altrincham. We love the fact that people who have regular jobs can do markets on the side and cook the food they have a passion for.”

Events like GRUB’s monthly Food Fair have shown the appetite Manchester has for this kind of cooking and, luckily for us, there’s no shortage of talented traders to satisfy our cravings.

“We have had a fair bit of interest from both street food vendors and pop-ups. People like Holy Crab, BC Poutine, Dirty Food, and Drunken Butcher. It’s still early days and nothing is confirmed as of yet, but it will be soon!

“We have both worked food markets with our salt beef bagels and know it can be really hit and miss. There is loads of amazing food being cooked and to give that a platform would be great. Look at Boa in London. I used to eat their pork buns off their market stall, now they have a restaurant in central London all though doing small residencies.”

Their passion for grass roots food is clear, but what about the venue itself? The Koffee Pot pot has just had a bar fitted – does this mean a name change is in order?

“The hard thing we have is that we are so well known for being a cafe it’s hard to change peoples mindsets to thinking we are a bar” says Sam. “It’s a totally different look and feel in the evening. We just need people to try it!

“We got draught beer installed last week and we are spending a bit on outside seating and covering. The mural wall is being painted by a local artist as well. It’s a huge space, around 30ft by 60.

“The menu change came as we wanted to get back to what we planned to do when we opened, which is New York deli-style sandwiches. We got caught up in the small plates that every other place does so wanted to do something a bit different. No burgers, pulled pork, just great, huge sandwiches! We do it all ourselves, so salt beef/pastrami is all brined and cooked on site. Pickles we make, Chicken Kievs are homemade and we are proud that we make as much as we can. It tastes better!”

In a sea of gentrified burger-flipping bars, Koffee Pot remains the venue of choice for the discerning diner who doesn’t want to pay over the odds for something nice to eat and drink. Simple.