Not for the fainthearted: Trainspotting LIVE performance at The Lowry 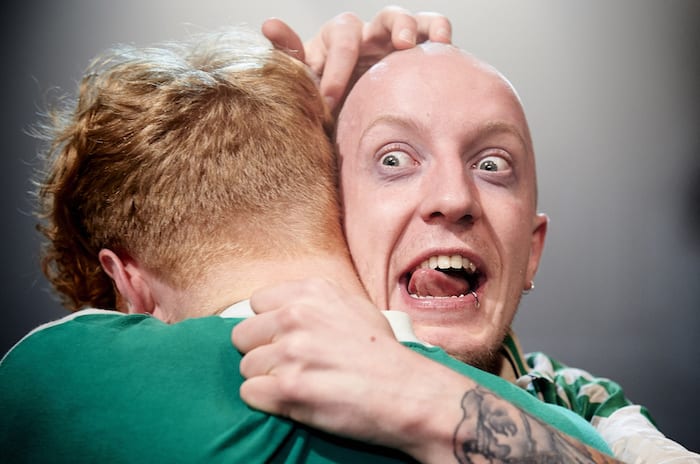 An immersive stage version of one of the most controversial novels and films of the 90s is coming to The Lowry Theatre.

Based on the iconic novel and film, Trainspotting Live follows the tale of a group of friends living in Edinburgh through the 1980s heroin scene.  Fuelled by the big-beat dance music  which helped make the film famous, Renton, Tommy, Sick Boy, Begbie and Alison are brought to life with humour, poetry and provocatively graphic scenes.

This 21st anniversary production is fresh from a no-holds-barred tour including an 11-week run at the Vaults and two sold out seasons at The King’s Head Theatre, and it’s won a Sunday Times award for best new play.

The 1995 film directed by Bury-born Danny Boyle shocked audiences with its graphic portrayals of drug use, sex and violence.

But if you think Trainspotting is going to be toned down for theatre, think again. This  production goes even further. The audience is part of the action – and that includes the notorious Worst Toilet in Scotland scene.

Irvine Welsh, author of the 1993 novel, has said of it, “I was shocked and I wrote the f****ing thing!” so it’s clearly not for the fainthearted.

We asked the play’s co-director Greg Esplin (who also plays Tommy) about the upcoming show.

What was the biggest challenge in turning Trainspotting – which is already an iconic book and film – into a piece of live theatre?

I guess the biggest challenge is that it already comes with a lot of expectation.  Choosing to put something on stage that people love and can be very protective of is always a risk.   I also thought it was important to work from the text first and then the film second. It was always important to me to have the right balance of the two.

Does the intensity have to be compromised because it’s live?

Can you give us an idea of what the Worst Toilet in Scotland scene involves?

Toilet water, lots of dirty old toilet water! It’s all good fun though and washes out.

Is there anything in particular you do to get into character?

Personally I keep a routine now for my warm up and pre-show rituals etc.  After 600 shows it can be easy to get complacent so I find sticking to a routine keeps me in the mindset of ‘this is the first time’. Also the 15 minute rave at the start really helps you relax into it!

Any advice for the audience?

Come along, put your dancing shoes on and don’t wear white!