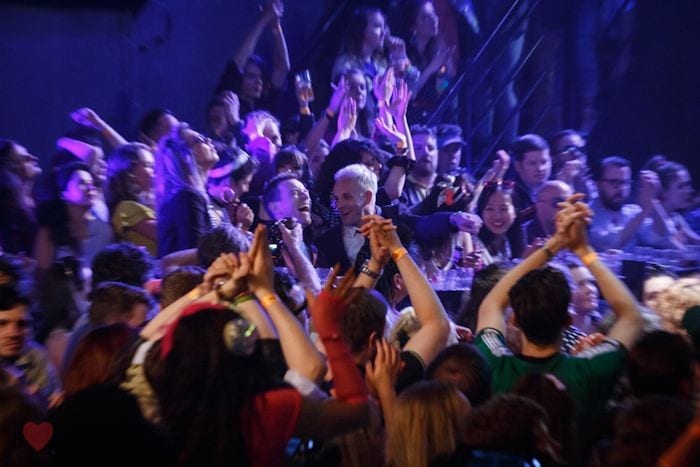 Danny Boyle, the Radcliffe-born, award-winning director of Trainspotting and T2 Trainspotting was in town this weekend, watching his local team draw against Walsall and attending a post-screening Q&A at HOME.

Trainspotting is the film which captured the soundtrack of a generation.  Based on the 1993 novel by Irvine Welsh, it was released in 1996 and featured some memorable scenes which included the worst toilet in Scotland, bar brawls and some impressive club nights.

The soundtrack quickly became an emblem for British music of the 90s – much of which was being played in Manchester clubs at the time.

The soundtrack from the first film includes Iggy Pop’s Lust for Life, as well as tunes from Lou Reed, Underworld and Blur. T2 Trainspotting brings a welcome mix of old and new, with a Prodigy remix of Iggy Pop’s original tune, plus modern favourites such as Wolf Alice and Young Fathers alongside icons such as Blondie and The Clash.

If this is making you feel all nostalgic for club culture, there are a number of 90s-era inspired nights for you to enjoy right here in Manchester. Try these for size.

Keyboardist of the Inspiral Carpets’ who rose to prominence during the 80s and 90s, Clint Boon DJs at South every Saturday from 11pm with his night Forever. This is underground at its best – quite literally in this iconic South King Street basement club – with some of the best indie tunes and alternative anthems spinning till 3am.

This three-floor club just off Oxford Road is known for its indie tunes.  Here you can enjoy some great 90s vibes, especially on Friday and Saturday nights. Upcoming events include Sound Control to Major Tom, a tribute to David Bowie, who was instrumental in helping director Danny Boyle bag the Lou Reed and Iggy Pop tracks for the first film without having to pay the extortionate fees.

Party at the former offices of Manchester’s own iconic Factory Records on Princess Street with live bands, indie and dance across three floors– ideal for an 80s and 90s style experience. Particularly evocative of the Trainspotting era is The Big Weekender every Saturday 11pm-4am which promises you can arrive early, leave late and party like a rock star. It’s on this night that the Neon Bar goes wild with indie, Madchester and soul plus other rooms filled with a range of genres. £2 entry before 12.

This famous Oldham Street venue in the Northern Quarter hosts a ‘let’s make this precious’ monthly club night, with the next on Friday 10th February. They play a range of indie and post-punk tunes which fit well with Trainspotting including songs from The Velvet Underground, Iggy and The Stooges and The Clash. Formerly held at Gulliver’s and the Star & Garter, this continues to be a popular night.