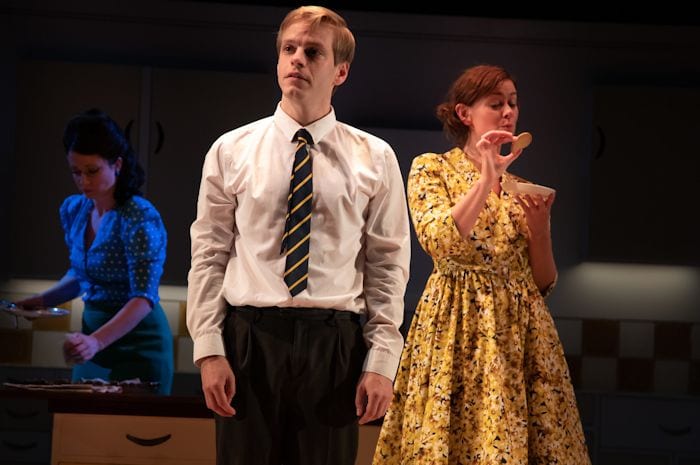 With the blustery weather, cold winds and relentless rain we’re having, you might be looking for something heart-warming to get you feeling all toasty.

Toast is a glimpse into the life of well-known best-selling author and TV chef Nigel Slater.

Based on Slater’s autobiography, which was later turned into a 90-minute film for the BBC, this theatre production written by Henry Filloux-Bennett is nostalgic, inventively staged and well performed by a cast who have some marvellous moments when they move around the stage which will leave you smiling.

Director Jonnie Riordan has a real sense of taste and smell and this is where the production excels, as we follow a 9-year-old boy and see how his love of cooking and food developed.

He has a loving relationship with his mother. The two of them enjoy breaking bread and working together to create something. The comforting smell of toast is all around as you watch with rose tinted spectacles, escaping from the rain outside.

His mother is not the best cook in the world and ignores recipes apart from her annual Christmas cake. But what the young Slater learns here is the value of togetherness and a sense of achievement when you see the finished product.

Added to this is conflict between this young boy and his father who is a real man’s man.

When he loses his mother, he is forced to accept his dad’s new girlfriend. This is where the play should excel but the drama is reduced to a cook-off and a few barbed comments.

Handing out food to the audience is an excellent idea, as the air is filled with the smell of sweets and chocolate. The only problem is the timing, as this is done just before a particularly poignant scene involving Nigel and his mother. So instead of stifling tears, all you can hear is the rustling of sweet wrappers.

The performances are very good, with Giles Cooper holding your attention throughout as Nigel. He manages to convey the impression of a very knowing child who lacks the emotional intelligence of an adult.

Katy Federman is excellent as mum and many other roles, running a gamut of emotions and holding the audience’s attention.

Blair Plant is quietly convincing as dad but the part is underwritten so you never really know what makes him tick. Samantha Hopkins as Joan, dad’s new girlfriend, is great at slapstick, but again her character is barely on the page, reduced to a woman who is muscling in on a family, so even when she delivers some heartbreaking news, we cut to Nigel again.

Stefan Edwards excels as a gardener who woos both Nigel and his mum, but again he disappears all too quickly.

Toast has all the ingredients to offer you a filling and warm night out. Some parts rise like a soufflé and others feel a bit over- or underdone. Everything is presented as very nice and middle class, so with that comes plenty of stiff upper lips.

That said, if you love Nigel Slater and share his love of food, you will enjoy this sugary trip down memory lane.

Nigel Slater’s Toast is at The Lowry until 16th November.