Manchester-based Americana restaurant brand SoLita, which has just relaunched its Northern Quarter restaurant with a new menu, has been named one of the best ‘cheap eats’ in the country by The Sunday Times…

The newspaper said there was ‘plenty of choice on the menu’ and praised SoLita for listening to customers’ views on what goes on the menu, including a Facebook and Twitter competition for children to design a burger.

“We were really pleased and proud to be included in the Sunday Times’ list of best cheap eats in the country,” said owner Franco Sotgiu. “We’ve always tried to make sure that what we do is accessible, so it was a lovely compliment and one that the whole team deserves.”

Following a full refurbishment of its original Turner Street restaurant in the Northern Quarter, including original graffiti artwork and new leather booths in the basement, the menu has been given a lift, too. 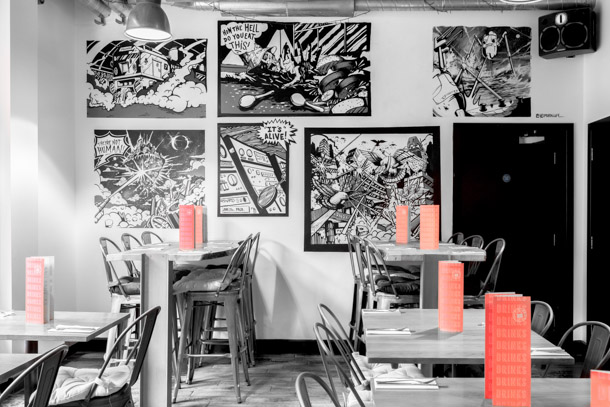 New menu items include the tuna poke – a classic Hawaiian spiced raw tuna salad, for those looking for a fresh and healthy option.

If you’ve left your diet at the door, why not try the short rib croquettes, with a dipping pot of rich beef gravy.

“We thought that it was time to give the menu a bit of a facelift as well as the restaurant itself,” said Franco.

“We’re always looking to evolve and offer fresh, interesting dishes that reflect the best of what we see on our travels.

SoLita also has restaurants in Didsbury and Prestwich, and is due to open a second city centre restaurant – a 1950s style steakhouse – in the Barton Arcade on Deansgate in 2016.