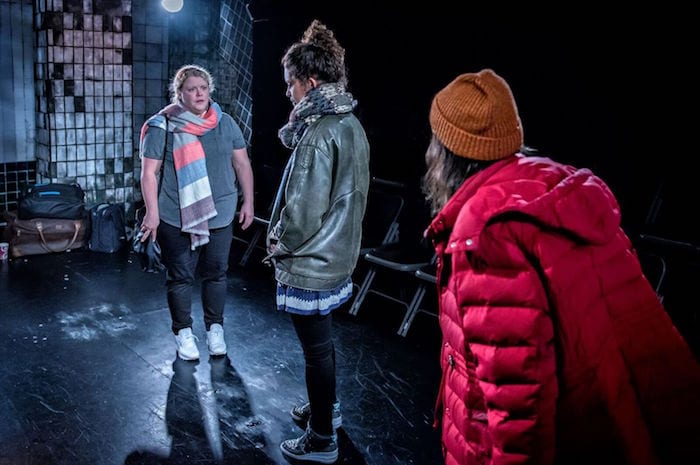 An unusual new play highlighting the homelessness crisis opens in Manchester next week before embarking on a regional tour.

Parallel is a darkly comic drama with an unusual twist  – none of the cast members know which role they are going to play.

It’s about three homeless women who are stranded for the night in an unspecified public place. None of them wants to be there but neither do they want to leave. As the night goes on they learn about each other, their differences and similarities.

The play was written and produced by and features Laura Lindsay, who was inspired to write it after doing a show in London.

“It was being performed in a 5 star hotel where people were paying thousands of pounds a night. That I had to walk past homeless people on the way to the venue made me very wary. I’ve never been comfortable with opulence. There was something that didn’t sit right with me.”

Laura conducted extensive research into the subject, interviewing homeless people and charity workers. The play focusses on the universality of human experience and the value of empathy in understanding such an important issue.

“I have noticed an exponential increase in homelessness. I don’t very often work in the city centre but when I do I find astonishing to see so many homeless people. We are facing a huge crisis.

“So many people are one pay cheque away from being homeless. What you see on the street is only 10 percent of the homeless population. The prevalence of private renting is a running problem. Very few people have the luxury of permanence and security.”

One of the most unusual aspects of the play is that each performance will start with a throw of a dice by a member of the audience to decide which Laura and fellow actors Arabella Gibbins and Emily Spowage will play – which means that each cast member has to learn all three parts. But why?

“It could happen to anyone. The consequences of where we happen to be born, what school we go to and who our parents are. None of these are in our control but have a huge impact on how successful our lives are. That’s why the dice roll is in there.”

A portion of the funds received from the play will be donated to Crisis and another local homeless charity.

“We’re really happy as the play coincides with Crisis’ 50th anniversary which was set up as a result of Cathy Come Home, a TV play about homelessness that was written in the 60s. I’m not saying our play will be as inspirational but that’s what we’re aiming for. It’s proof that art can instigate social change.”

The play premiered earlier this year in Harrogate to rave reviews and will be touring the country, with each stop dictating a new local charity to donate to.

It will be the second performance for Laura at Hope Mill Theatre, a versatile space that also acts a café and hub for actors and people of all backgrounds to mingle.  “It’s so welcoming and flexible for different productions and plays. We did a production here called Parade and there are other productions coming up like Hair that look phenomenal.”