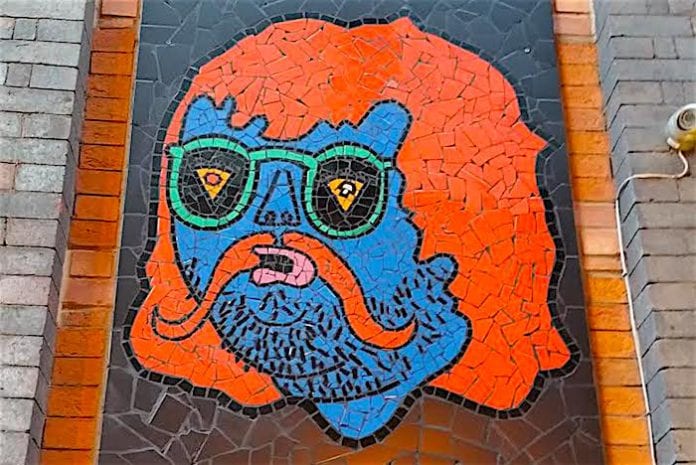 Manchester mosaic artist Mark Kennedy has been active in the Northern Quarter recently – with a number of new murals which include four massive mosaics commissioned by Crazy Pedro’s pizza parlour and a memorial to Craig Gill, the Inspiral Carpets drummer who  passed away recently.

Kennedy is known for his famous Manchester mosaics on the side of the Afflecks Building – which include a multi-coloured version of Joy Division’s Unknown Pleasures album cover and a collection of local icons – including a Warburton’s Toastie loaf.

Now he is showing the transformative powers of his mosaics, bringing colour and life to Short Street in the Northern Quarter for a start. Here he has created four mosaics commissioned by Crazy Pedro’s Pizza Parlour, who are aiming to transform this ‘neck end’ of the area into an inspiring place to be. 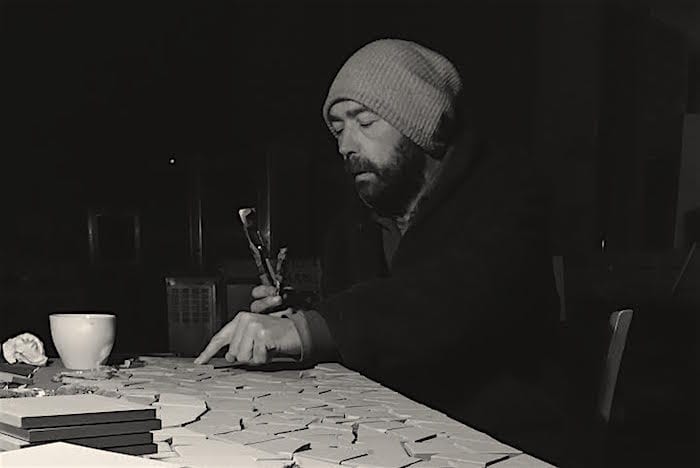 The brightly coloured panels are based on the pizza restaurant’s wrestler characters, originally drawn by Darren Newman, another Manchester artist, and stand at an impressive 5ft high.

The mosaics have been created using a brand new lightweight backing called Deltaboard so the tiles can be moved into place more easily – allowing for more ambitious designs.

Helping Mark complete his work is Mary Goodwin, whom he met at a concert when she asked him for advice about her plans to create a mosaic on the wall of a primary school where she previously worked.

Mark also has made another addition to the side of Afflecks – in the form of a mosaic tribute to Inspiral Carpets drummer Craig Gill who died last month. Craig was involved in the Manchester music scene for a massive 30 years and also a prolific tour guide of the area.

For more information on the mosaics: www.markkennedy.co.uk