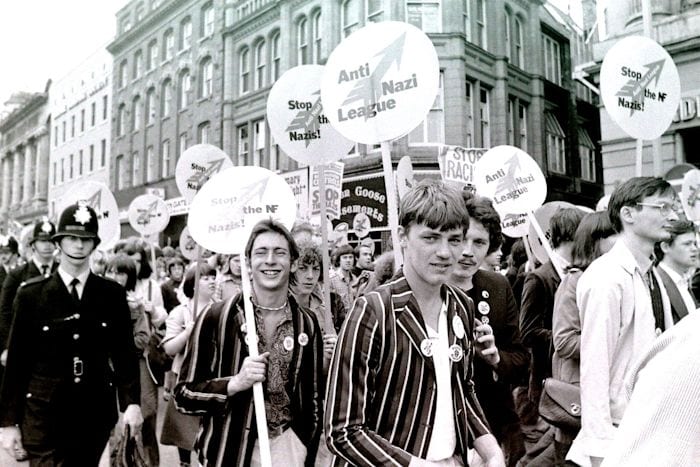 On Saturday 15 July 1978, a massive rally against racism made its way through Manchester to Alexandra Park, where 40,000 people gathered to rock out at the Northern Carnival Against The Nazis, organised by the Anti-Nazi League and Rock Against Racism.

People travelled from far and wide to be there, creating not just a big sound, but one of the biggest protest events of its kind to counter the rising political threat of right-wing organisations like the National Front.

There were an estimated 15,000 people at the opening rally, with crowds building as it moved to the city centre, down Portland Street, towards Hulme and then into Moss Side. It  finally headed into Alexandra Park for the concert which featured Bolton punk icons Buzzcocks and Birmingham reggae legends Steel Pulse, with support from Moss Side’s Exodus.

It was “the day it became cool to be anti-racist”, according to Bernie Wilcox of Rock Against Racism, joint organiser of We Are Dynamite!, an exhibition taking place close to where the rally passed 40 years ago.

On display are unseen photographs taken on this historic day by John Sturrock, including the moments when the Rock Against Racism movement gathered anti-Nazi protesters for the massive rally which started close to Strangeways Prison.

“The scale and impact of the Northern Carnival against the Nazis can’t be underestimated in the struggle against the very real threat of political racism during that time,” says exhibition curator Abigail Ward, “yet John Sturrock’s newly discovered photographs of the day let us see it for ourselves.”

“Bringing tens of thousands of people together in a unified front against right-wing aggression and discrimination, in a pre-internet era, could seem fantastical to us now, but the strength of conviction amongst the organiser the bands that played and communities in Manchester and the wider north of England made such a significant event possible.”

To look back to this Northern Carnival Against The Nazis, is to remember a historic event highlighting Manchester’s community spirit coming together against racism, prejudice and intolerance.

And as with all Manchester District Archive projects, the public has been encouraged to submit their own memories and records of the event.

Why not go and see it for yourself?

We Are Dynamite! is at NIAMOS, Chicester Road, Hulme until Saturday 22nd September 2018.