Brazil is one of those far off places that really gets the imagination going. It makes you think of powder white beaches, crystal clear waters and lots of things beginning with ‘f’ like forests, fiestas, football and favelas.

Unlike its fiestas and its football, Brazilian food scene hasn’t quite taken its place on the world stage. A new cantina which has opened in the Northern Quarter and it might just change that.

Favelas, a secret little joint just off Hilton Street, prides itself on its varied and mouth-watering range of flavourful fare. We headed down to see what was on the menu for anyone who fancies a trip to Brazil via the Northern Quarter. 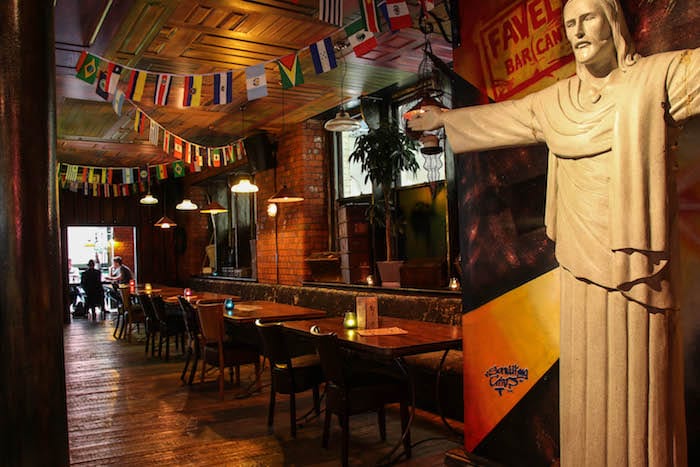 The venue is a grand room filled with gritty-chic furniture and restored bric-a-brac. There are quirky features lining the walls from old Brazilian neon signs and fairy lit palm trees to drum kits from times gone by. The music is twangy, setting the scene for those afternoons that turn into evenings that turn into nights of dancing longer than you thought possible. Mind you don’t go pulling a hip muscle though.

Now, let’s cut straight to the chorizo. The food here is everything it claims to be – filling and flavourful. We tried the moqueca, a traditional stew of cod, juicy king prawns, fiery mixed peppers and coriander all mixed together in a tangy yet creamy coconut sauce. 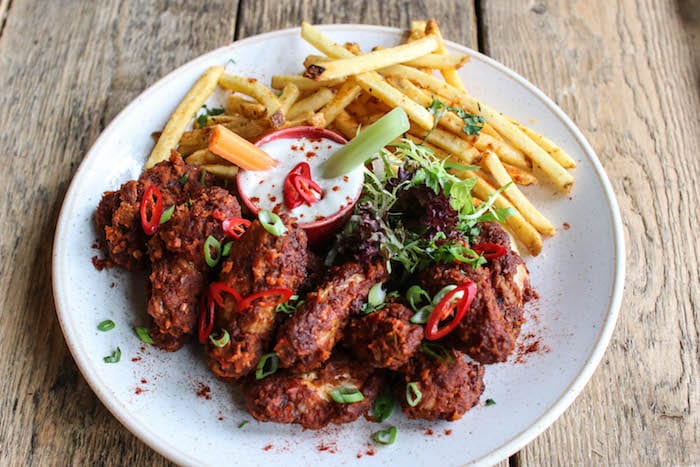 This rich seafood stew has become one of Brazil’s most famous dishes and I can see why. The flavours mingle wonderfully with each bite packing quite the punch. It’s the perfect dish if you like a little spice but not so much that a couple of helpings feel like a roundhouse kick to the mouth. Fragrantly flavoursome and highly recommended.

The whole king prawn skewers were similarly moreish. They were small, perfectly formed and brushed with a homemade garlic and chilli marinade before being served with one of the most flavourful red pepper dips you’ll ever taste. Team this with the spicy fries, Brazilian BBQ chicken wings or cassava wedges for the perfect post-work pick me up.

Brazil is also famous for its steak. In this case, chimichuri ribeye. It’s the sort of steak that is cooked so well it has that perfect buttery texture. The flavours are locked and it comes to the table sizzling and bubbling in browning deliciousness. It is then sprinkled with salt which helps to build that deliciously crisp and savoury layer on the outside of the meat but allows it to maintain decadently juicy inside. Served with charred corn on the cob, house slaw and onion rings, this one’s a winner. 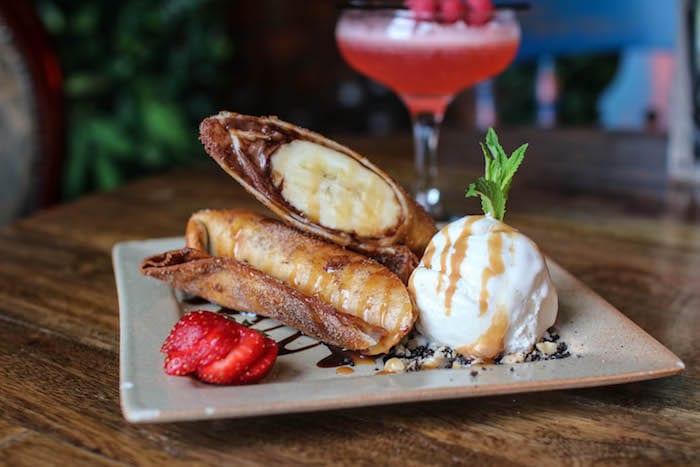 On to the piece de resistance – dessert. The churros comes highly recommended, with a crisp sugary outside and a soft fluffy inside. There’s a ton of toppings to choose from including crushed Oreo and cinnamon sugar. Just make sure to order up a side of the homemade rum sauce. Whatever you decide to order, this is one dish that’s sure to sweeten up your life.

Favelas really is perfect for those catch up nights out with friends or that impromptu date you’ve been planning for months. Get your fill of Brazilian flavour and then walk down to the canal and stare into each other’s eyes whilst holding onto an Oreo dusted stick of churros.

Favelas has the vibes and the food to make for a stellar night. It may not quite be Brazil but it’s pretty damn close.