The average adult buys more than three plastic water bottles every week. That’s 175 every year. In total, some 7.7 billion plastic bottles are bought annually across the UK, resulting in substantial amounts of single-use plastic waste ending up in our oceans.

But a new campaign launched today – which is National Refill Day – hopes to sign up to 500 locations in Manchester to refill water bottles free of charge. The campaign intends to make Manchester the country’s most refillable city.

I Love MCR® has teamed up with the Manchester Food & Drink Festival for The Refill Campaign, which encourages participating cafes, bars, restaurants, banks, galleries, museums and other businesses to sign up to the free Refill app and put a sticker in their window so passers-by know they’re welcome to fill up their bottle for free.

There are already 165 stations in Manchester, and MFDF is hoping to sign up 500 more businesses by the time the festival starts on 26th September. 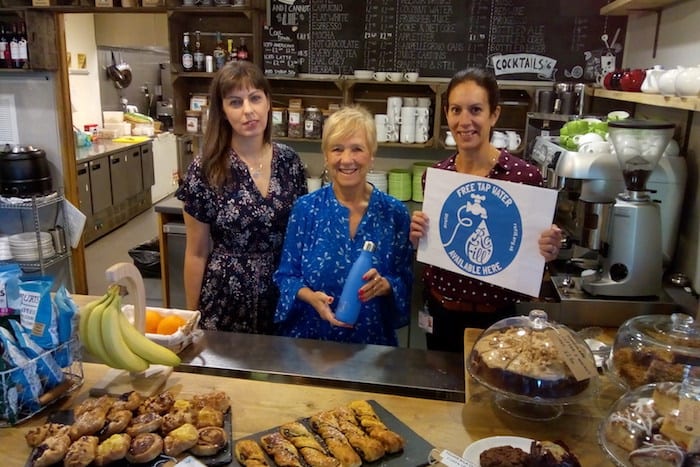 It’s estimated that the scheme, now being rolled out nationwide with support from Water UK and local water companies, will cut plastic bottle use by tens of millions each year, as well as increasing the availability of high-quality drinking water.

And now, this latest campaign will put  Manchester at the forefront of the movement.

Mancunians looking to ditch the plastic bottles will also be able to buy a  special MFDF and I Love MCR® branded version of Chilly’s stylish re-usable water bottles at a very special price of £15 instead of the usual £20. A donation from each sale will go to support the scheme.

The bottles will be sold in the I Love MCR® online shop and at the Festival Hub, the centre piece of Manchester Food and Drink Festival, which is taking place in Cathedral Gardens this autumn. Customers will be encouraged to refill them at the city’s many new Refill points.

“The Refill scheme in Manchester already has backing and we want to enhance this by recruiting even more businesses to take part and ensure that Manchester is the Refill capital of the UK,” said Alexa Stratton-Powell, director of MFDF.

“More and more people are ditching single use plastic bottles and by launching our very own refillable bottle we’re able to offer a practical solution and donate £3 per bottle from sales to the scheme to help spread the word and ensure more and more people refill their water bottle.”

40 new food and drink venues have been recruited in the last couple of weeks, and MFDF and I Love MCR® are now officially calling on restaurants, bars and cafes to sign up to the campaign.

“Every time we refill a re-useable bottle instead of buying and throwing away a single-use bottle we not only reduce the amount of plastic and fuel being used, we save a bit of money and help clean up our towns and open spaces too,” said Sarah Irving, Refill regional coordinator.

“Having MFDF on board will really help us to make a splash and get us on the right path to becoming the most refillable city.

“If anyone can do it, Refill Manchester can!”

Venues wanting to take part in The Refill Campaign should email: [email protected]com.