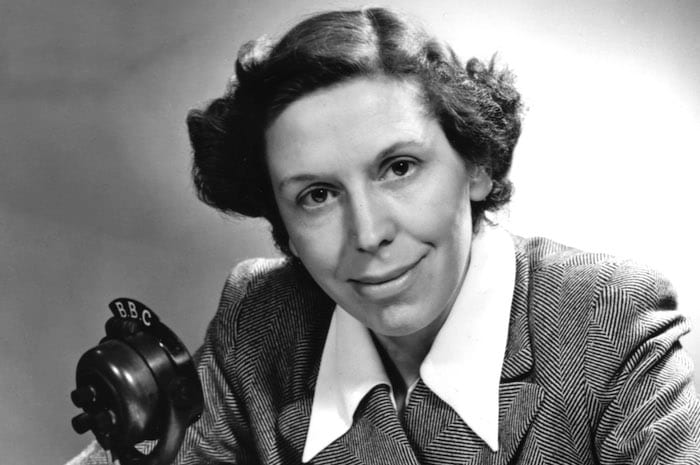 Olive Shapley was a pioneer of social documentary in the north from the 1930s.

She was the first producer to regularly leave the studio and get out to meet people. Using enormous mobile recording vans to travel across the region, she’d interview people in their own homes or workplaces, encouraging them to speak into the microphone as naturally as possible.

This week, a new release of material from the BBC’s oral history collection reveals for the first time what Olive had to say about her groundbreaking work in Manchester.

The archive material includes Olive’s entertaining comments on creating the first social documentaries in the region, her preference for the north as a location, and why she preferred giving a voice to ordinary people.

“There was a lady trying to buy a hat for a wedding, and every one she tried on, the girl fell about saying, ‘Aye, love, you look terrible.’ I thought, ‘It was never like this in London,’ and I knew then it was the north for me.”

Olive reveals in the interview how she came to make the first social documentaries in Manchester, and how she tried to reflect the reality of working class life.

“This started because I was standing on a station platform one day – I can’t remember which station – and there was a great advertisement for Cleethorpes, a great, big, colourful advertisement of a laughing, happy family with their buckets and spades,” she said.

“There they were, having the time of their lives, looking well fed and tanned, and on the other platform opposite were the real Mancunians, who might never get to Cleethorpes.

“It was a time of great distress up here, much more than it was in the south, and I felt I wanted to reflect this in some way. I remember going to County Durham for the first time and seeing miners sitting on their hunkers on the corners of streets, and thinking, ‘BBC should be doing something about this’.

“This was the basis of all my programmes, and I always felt I was so lucky to have come in at a time when this could be done technically. It was something new, and it was people that you got to know.

“You lived in their houses for a bit, you sat around with them, talking in pubs and things, and you got them relaxed enough to talk freely.”

Olive describes making her first documentary, and how she went into the local Co-op to speak to ordinary customers.

“I did something called ‘LSD’. In those days it meant ‘pounds, shillings, and pence’. I took the van to Sowerby Bridge, and we blocked the main street there for an hour or so while I went into the Co-op with a microphone and recorded people spending their money on Saturday morning.”

While we are now used to this sort of regional broadcasting with roving reporters and vox pops from the streets, it was groundbreaking in the 1930s.

“Olive Shapley was a true pioneer of the 1930s – a genuine radical, who broke all the conventions of the time by taking the BBC microphone out of the studio to record people in their own homes and workplaces talking about their everyday lives in a spontaneous unscripted way,” says David Hendy, Professor of Media and Cultural History at the University of Sussex and curator of the collection.

“In doing so, she made broadcasting a less stuffy, more democratic thing than it would otherwise have been.

“Her interview for the BBC’s oral history collection is a really important piece of social history, reminding us vividly of the poverty and unemployment and political turbulence of the 1930s – and how individuals such as her tried their best to make broadcasting a force for understanding and betterment.”

Olive had always wanted to do documentaries, and found talking to ordinary people more interesting than famous names.

“I wanted to get real people talking about their lives,” she said in the 1984 film. “You can never get that in a studio, because this was an unnatural environment. You had to go into people’s homes.

“This did open up an entirely new world. I had always wanted to do documentary, and suddenly you could do it. That was exciting.”

Olive came to love the city she came to call home.

“If I thought London was the capital of England, I was quite wrong,” she said. “Manchester was.”

The full oral history collection 100 Voices that made the BBC: People Nation and Empire is available online.