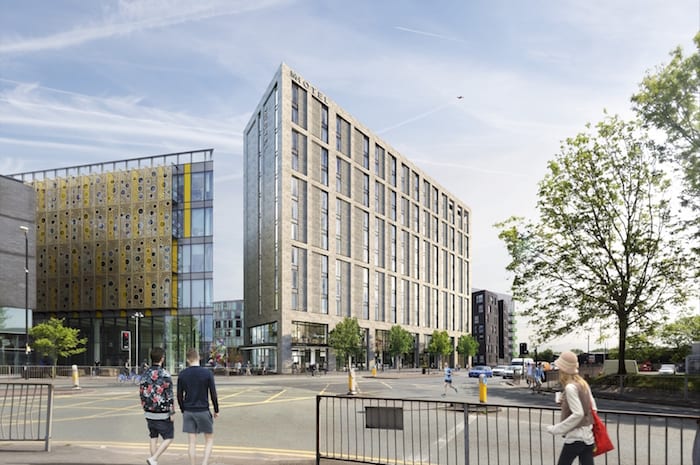 Earlier this month, Manchester city council announced plans to give Great Ancoats Street a much-needed facelift with the addition of a new tree-lined boulevard and additional foot crossings on the busy strip.

Now it seems that a new 12-storey hotel could be built on the stretch.

International hotel operator Meininger will be submitting a planning application in August to build a 12 storey, 212-bedroom hybrid-hotel scheme in the New Islington area by January 2022.

If approved, it will complete the regeneration of the larger site which formerly housed two retail warehouses and car parking, and was originally the home of Caledon Cotton Mill in the 1800s. It is already home to a 150-bedroom Ibis hotel and the striking 20,000 sq ft Grade A office known as Fabrica.

The new hotel will have 785 beds in a mix of rooms including classic doubles, private multiple-bed rooms and dormitories, and will offer flexible and affordable modern accommodation alongside a reception, lobby, lounge, breakfast room and bar as well as a guest kitchen and games zone.

It will also have a taxi drop off area, disabled parking and secure cycle store, and is expected to create 21 new full-time jobs upon completion.

The development has been designed by 3D Reid, the architects behind several other hotel schemes in the city, including the Principal, Hotel Indigo and Manchester Marriott Victoria & Albert hotels, and will be developed by award-winning property and development company S Harrison.

Managing director Ann Scott, said: “This is our first development in Manchester and we have worked closely with respected Manchester based planning consultants Turley, and architects 3D Reid, to bring the scheme forward. It’s expected that 21 new full time jobs will be created once the hotel is complete.

“This area of Manchester, with its rich textile heritage, has recently undergone significant regeneration with the support of the local council, and we are delighted to bring our expertise in the hotel and leisure sector to this popular part of the city.”

Meininger is a German-owned company which opened its first UK hotel in London’s Hyde Park in 2006. It now has 26 European hotels in 15 cities. The new hotel on Great Ancoats Street will be its first in the north of England, but is unlikely to be the last as it has announced it is actively looking for more sites in the north west.