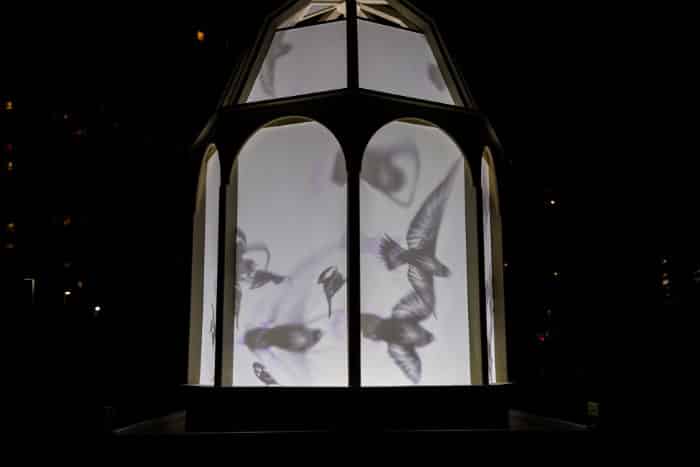 A new travelling art installation has been created for Greater Manchester, and potential national tour, to entertain residents from the comfort of their own homes whilst galleries and other spaces are shut.

The project has been inspired by the public’s heightened awareness of nature during the pandemic, offering solace, comfort, motivation and relaxation.

The Mystery Bird is a giant three metre by two metre birdcage filled with projected birds and accompanied by a bespoke soundscape created by bird inspirationalist and beatbox star Jason Singh.

This will travel the streets on the back of a flat bed truck, evoking the excitement of a traditional carnival float.

Manchester based beatboxer and vocal sculptor Jason Singh is best known for the Tweet Music album, commissioned by the National Trust after research found that listening to bird song before you are twelve makes people calmer and boosts positivity.

And that indeed listening to bird song is relaxing, soothing and a re-connect to nature for all age groups.

“So many people mentioned enjoying birds, listening to birdsong and getting involved with nature in general during the first lock down,” said programme producer at Quays Culture and co-creator of Mystery Bird Jude Jagger.

This latest work features endangered birds on the RSPB list and local birds like the Willow Tit (a regular in Wigan), Grasshopper Warbler, Lapwing, tree Sparrows, Starlings plus “saved” birds like the Peregrine Falcon intertwined by Jason’s electronic score creating the sounds, rhythms and feelings of bird song.

This premiere performance will be broadcast from the travelling installation.

“This work celebrates all birds, big and small; birds with personalities, displayers, the gangster birds as I call them – the sparrows; birds that people aren’t familiar with,” said Jason.

“I hope my work will connect everyone to the amazing creatures in our life that perhaps we haven’t noted until now.”

The birds themselves have been created by artist Helen Musselwhite, who is a paper artist.

“I have worked with these six birds, some of whom aren’t commonly known, to show their personality, their lives and their passions,” said Helen.

” I show the birds in flight, banking, swooping, flying and static. I have “lived” these birds for months and want to share their story.

“It is the story of us all at present; a feeling of being trapped, unsure, not able to be free – that is the Mystery Bird story.”

The Mystery Bird installation will travel the streets, singing and performing their unique life cycle in a seven-minute choreographed showcase before their “release” when the birds will gather, swoop and fly around the houses.

“The trapped birds will burst from their cage and surround those watching – flying across their houses and down their street,” said co-creator Gemma Saunders.

“We hope this creates an element of hope, joy and happiness to those who are lucky enough to see it.”

The Mystery Bird Tour will take place over four days in December, and locations will be kept under wraps to be socially responsible. However, those people not part of the route will be able to watch the piece online and get involved in a collaborative video – more details to be announced soon.