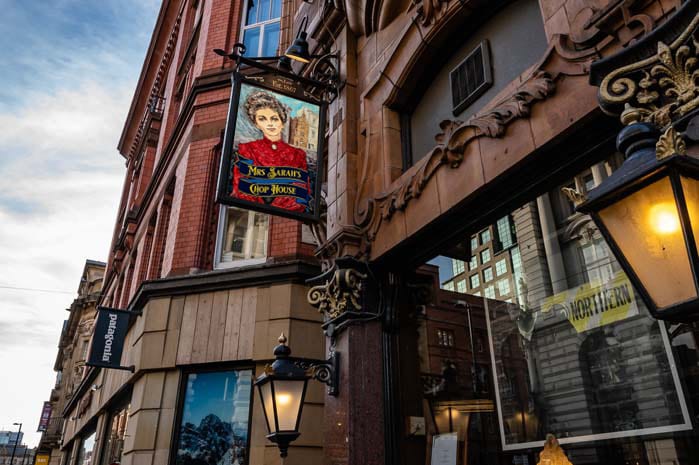 It is one of Manchester’s most iconic pubs – but Mr Thomas’s Chop House, which first opened in 1867, is about to get a radical name change.

For the owner of the legendary city centre pub is renaming it Mrs Sarah’s Chop House in honour of the formidable females who ran the Victorian pub at a time when women weren’t generally even allowed INSIDE the Chop Houses of Manchester in the late 19th and early 20th century.

Mr Thomas’s owner Roger Ward has become so fascinated with the history of the pub and restaurant, and in particular the mother and daughter both called Sarah who ran it 150 years ago, that he is rebranding the business in celebration of the women of Manchester. 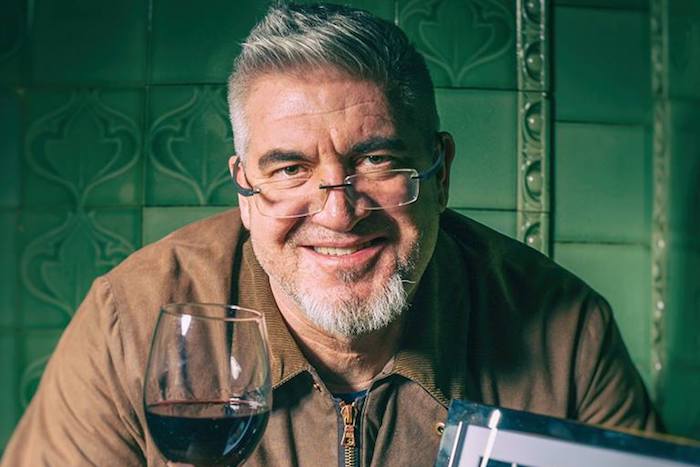 Roger says: “At the end of last year, Manchester unveiled our statue of Emmeline Pankhurst. Since then the John Rylands Library has been running a really fascinating exhibition called The Women Who Shaped Manchester.

“It asks simply, what will they inspire you to do? I thought we should make a statement and tell the fascinating story that has emerged from original research on ancestry websites and in the archives of the Victorian Manchester Guardian.

“It’s so important to recognise the importance of other unsung, but still hugely influential figures from our city who fought the norm and achieved great success in such a male-dominated environment.” 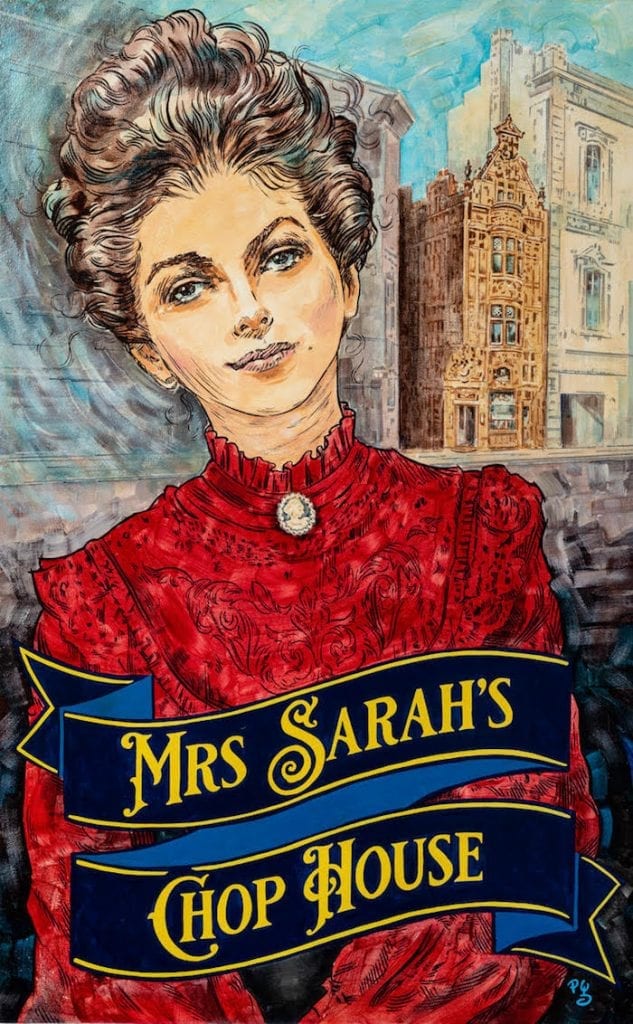 Roger believes that Sarah Studd and her daughter, also Sarah, held pioneering roles which pre-dated the British women’s suffrage movement thanks to their years spent at the helm of the pub, which was first opened in 1867 by Thomas Studd, Sarah senior’s husband.

Thomas was Manchester’s original chop house entrepreneur. He worked in and founded five of the city’s 12 such dining rooms between the 1850s and 1880s. But, compared to his wife, he barely worked in the chop house that still bears his name.

The pub is to be rebranded with specially designed Mrs Sarah’s Chop House signs from Thursday for the next six weeks. 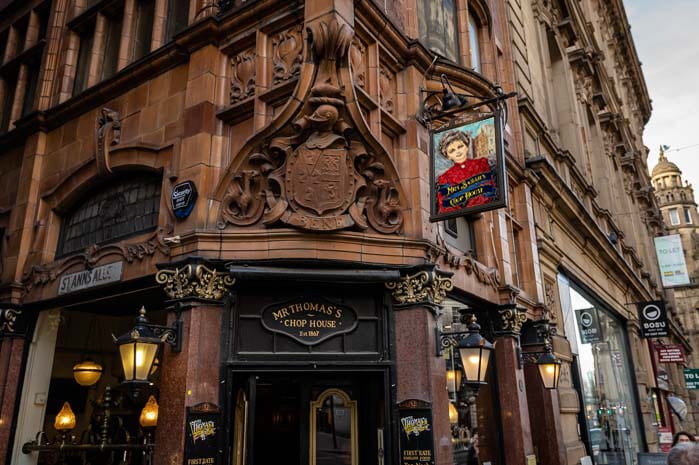 Roger says: “To me there’s absolutely no doubt that although Thomas’s name was on the lease and the public signs, Sarah was instrumental from the beginning. Thomas only decided to branch out on his own after his marriage in 1855. The old adage that behind every great man is an even greater woman really rings true with the Studds.

“We know that by 1874 he was too ill to work in the city and tended plants in his nursery in Heaton Mersey. He died in 1880, at just 45 years old from the chef’s version of Black Lung.

“Sarah was obliged to run two Thomas’s sites (including a separate dining room on King Street). She was responsible for 3 to 400 covers a day, which is really hard work. Eventually she was succeeded by her assistant and daughter Sarah who ran it for four years until 1901. So Mrs Sarah Studd was definitely running the show.

“And when you consider she had eight children and the young couple started with nothing, it really is a remarkable story of a truly amazing partnership, and a truly amazing woman.”

Roger has been researching the Studd family history to try and find out as much about them as possible, but has still been unable to find any photos of the couple or their eight children.

He says: “We’ve actually managed to trace one living relative. We’re desperately hoping we can find even more information and maybe some historic family photographs. It would be very emotional to discover what these people really looked like.

“We are passionate about telling this story. The voices of these women are getting clearer and their remarkable achievements in an almost entirely male dominated period deserve to be heard.”

Indeed, the chop houses, known as meeting houses for businessmen, remained male only venues until the second half of the 20th century, segregating women into separate dining spaces.

Roger says: “I think it’s a really important story for a city known for so many global firsts and that has such an important place in women’s history.  Sarah must have been a huge larger than life character to run this establishment in such male-dominated times, and I’d love to find out more and even write a book about her one day.”

Both Sarah Studds can be seen on a mahogany honours board displayed in the pub featuring all the licensees from 1867. 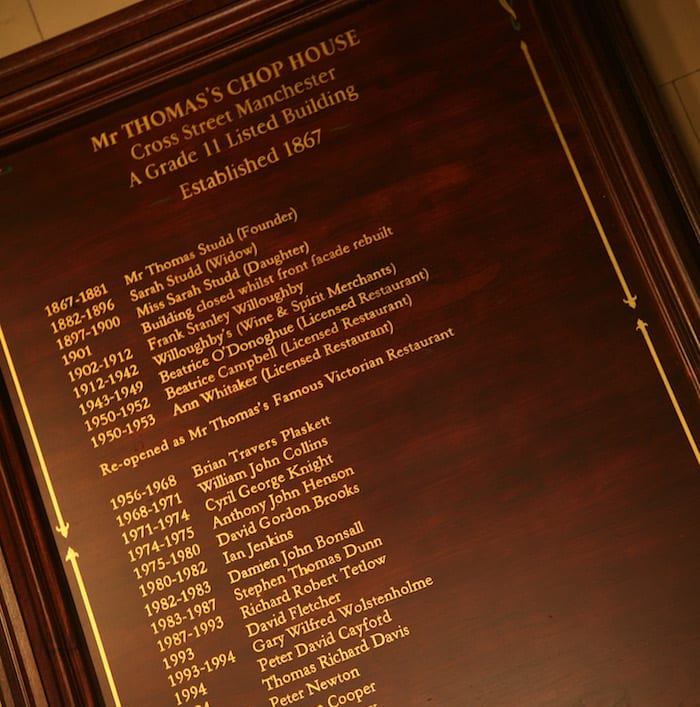 Today women remain at the very heart of Mr Thomas’s success, with general manager Selina Lee running the ever-popular pub with the help of restaurant manager Sharron Clark who has been at Mr Thomas’s for more than 20 years.

“Selina is a mum, balancing her work responsibilities with her home life and Sharon is more a part of the fabric of Tom’s than I am! Both have been with us for years and they know the ins and outs of the place better than anyone.

“I think it is amazing that tiny Thomas’s is one of the few surviving Victorian chop houses in this city. And I think both Sarah Studds would be really proud of what they started and what Selina and Sharon are continuing.”

Can you help Roger with any information on the Studd family who ran Mr Thomas’ Chop House?  Email our newsdesk on [email protected]