One of our own has been honoured at Daily Mirror Pride of Britain Awards, celebrating unsung heroes across the UK. 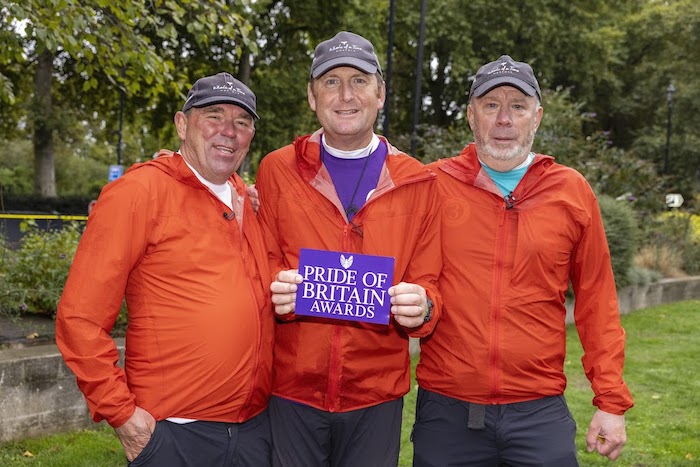 The Awards, which celebrate ordinary people doing extraordinary things, will be broadcast on ITV on tonight at 8pm.

Manchester’s 57-year-old Mike Palmer is set to receive this year’s Pride of Britain Special Recognition award, after he embarked on a fundraising walk with two other dads that inspired the nation and raised more than £880,000 for charity.

Mike, from Greater Manchester, Andy from Cumbria and Tim from Norfolk are all set to receive the award.

After enduring the most heart-breaking loss imaginable Mike Palmer, Andy Airey, 61 and Tim Owen, 52, forged a close bond when they met through the suicide prevention charity, Papyrus.

Andy’s 29-year-old daughter Sophie died just before Christmas 2018. Mike’s daughter Beth was just 17 when she took her own life in March 2020, a few days after Tim’s 18-year-old daughter Emily, who like Beth, felt overwhelmed by pandemic restrictions, passed away.

The trio came up with the idea of a sponsored walk between their homes in Cumbria, Greater Manchester and Norfolk to raise funds for Papyrus, and awareness of suicide in young people.

They met hundreds of people affected by suicide over the course of their 15-day walk and campaigned for additional mental health support in schools.

Their next walk saw the dads trekking 550 miles over 31 days, taking in all four UK parliaments, ending on 10th October 2022, World Mental Health Day, and taking their fund-raising total to more than £1 million.

Andy says: “During our walk we met very many suicide-bereaved parents, all of them said the same thing; it was only after they lost their child that they discovered that suicide was the biggest killer of under 35’s in the UK; they all asked, ‘If suicide is the biggest threat to our children’s lives, why is no one talking about it?’”

Mike adds: “3 Dads Walking is not a club I want to belong to, but it gives us, as fathers, an opportunity to fight back and maybe make a difference. We are all too aware that there are more young people out there falling into despair and see no way out other than to end their own precious lives. There is help out there. There is hope and that’s what 3 Dads Walking is about, it’s about hope.”

Co-hosted by Carol Vorderman and Ashley Banjo, the Pride of Britain Awards will feature extraordinary stories of bravery, selflessness and phenomenal fundraising feats.

More than 150 of our biggest stars will come together to celebrate the nation’s unsung heroes.

Host Carol Vorderman said, “Pride of Britain is all about the winners. We have so many nominations, and our team and judges work incredibly hard to make sure we are celebrating the most extraordinary people. Meeting them is the absolute highlight of my year.”

Co-host Ashley Banjo added “It is always such a humbling experience to meet the Pride of Britain winners. They make you feel good about the world we live in and inspire you to think how you can help to make it a better place.”