A Technicolour Feast for the Eyes and Mouth...

I haven’t been to ‘sleb’ chef Michael Caines’ renowned eatery at Abode since it opened to a fanfare and hopes that fine dining had returned to the city – many moons ago.

“For those who think it’s the movie star Michael, it’s not – it’s the culinary star…”

Back then one of my clients seemed incredibly excited to be hosting the after-party of the launch – someone I didn’t have down as a food fanatic – it only became apparent when he quoted ‘You’re only supposed to blow the bloody doors off’ that I realised he’d got his Michaels mixed up.

For those who think it’s the movie star Michael, it’s not – it’s the culinary star who has trailed a blaze for mouth-watering dishes across the country.

The Gay, a moping Ginger (he’d had a spat with his missus) and I went to check it out and it’s striking how this restaurant has firmly found its feet – where once it was the sort of place you would be afraid to laugh out loud in case you weren’t giving the dishes the reverence they deserved, it is now effortlessly stylish, cool and most importantly, offers the kind of food you can’t find elsewhere in the city.

“It’s still the sort of place where waiters put the napkin on your lap, and the service was impeccable throughout our visit.”

It’s also sorted out its pricing to a within reach treat budget offering a grazing menu of small plates from £5 a dish and a bargain taster menu, given the quality, from £60.

It’s still the sort of place where waiters put the napkin on your lap, and the service was impeccable throughout our visit. They also announce what you’re eating with each course which can be a little odd as presumable most people remember what they ordered.

The room is comfortable without wowing and a chic champagne bar complete with Paul Smith carpeting (which matched the Gay’s shirt) is ideal for an aperitif.

We opted to go a la carte and I was torn between the signature pea and mint soup or the scallops. Luckily an amuse bouche of the scallops enabled us to test them, and from that moment, you knew this was going to be exceptional food.

“One immediate thing hits you is that the food here is not only a feast on the tongue but also on the eyes, with perhaps the most technicolour dishes I have come across.”

And then it’s the attention to detail, how even the smallest smear or artful blob on the plate is there for a reason, adding another level of flavour to each dish. 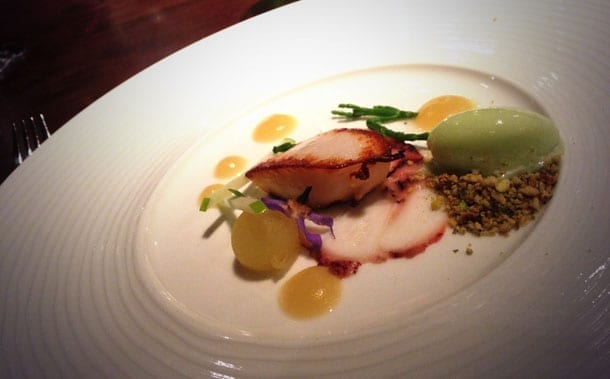 The scallops were perfect, accompanied by octopus carpaccio that was so thinly sliced it could only have been done with a scalpel.

Starters are from £8 and I tucked into pea and mint soup which seemed at first glance to be a portion made for a Barbie doll but actually, as the meal progressed, I realised these sizes are perfectly balanced, so you feel sated and also delighted by the taste, without feeling heavy.

“His quail salad he described as a ‘playground of tastes’ and I stole a forkful, it was, I think, the star of the entrées.” 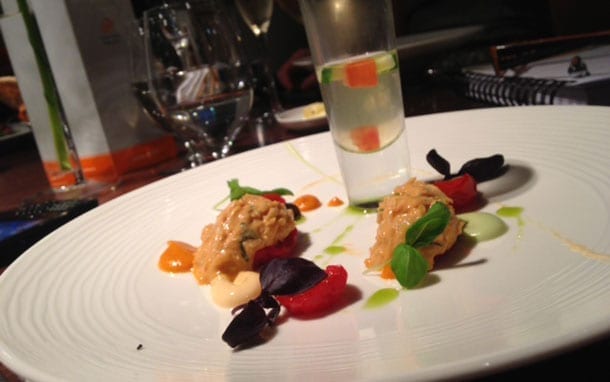 Almost fluorescent it was simply fantastic and Ginger said it even tasted green, if green has a taste. His quail salad he described as a ‘playground of tastes’ and I stole a forkful, it was, I think, the star of the entrées.

The Gay was slightly disappointed by his crab salad, saying the crabmeat flavour was almost drowned by the sauce, but this was the only slip in the whole meal.

Onto mains (from £17) and I had bagged the sea bass which came with a delicious shellfish mousse and gazpacho sauce that was to die for. 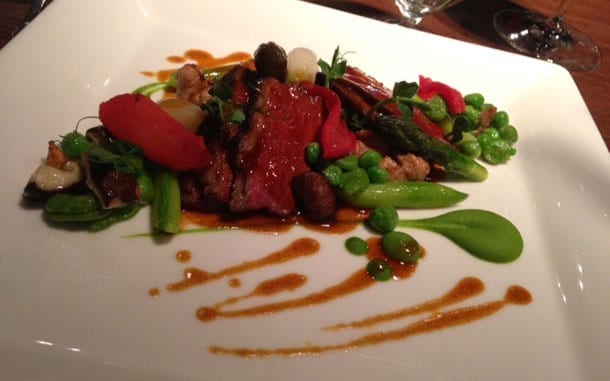 Ginger’s lamb he said was both a work of art to look at and also to taste – cooked to perfection, while the Gay tucked into belly pork. He tried to offload the crackling to me because ‘ you’re from Yorkshire and they have it in sandwiches there’ – hello, don’t think so, but I do admit to dripping sandwiches. He said it was a perfectly balanced dish and one he would go back for.

We had room for dessert and I tucked into a chocolate assiette with three superbly sensuous choc treats including white chocolate ice-cream, a jaw-dropping mousse and my favourite, the praline, which I had to physically stop Ginge from nicking. 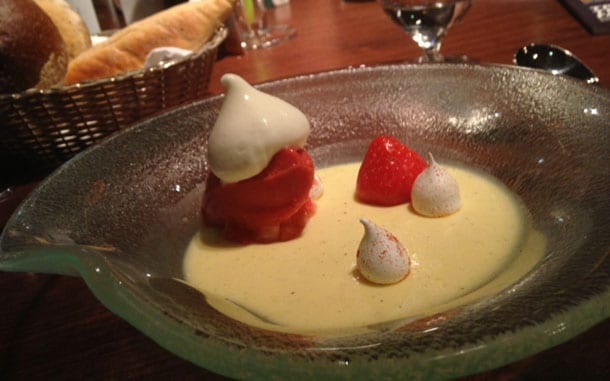 He tucked into ‘strawberries and cream’ which was in fact a take on crème brullee and went down extremely easily.

The Gay opted for an Irish coffee that came with petit fours but when we sucked our chocolate lollipops they literally burst liquid in your mouth, something of a shock.

Then it was off into the night for an obligatory nightcap at the Liquor Store, but that’s another story.