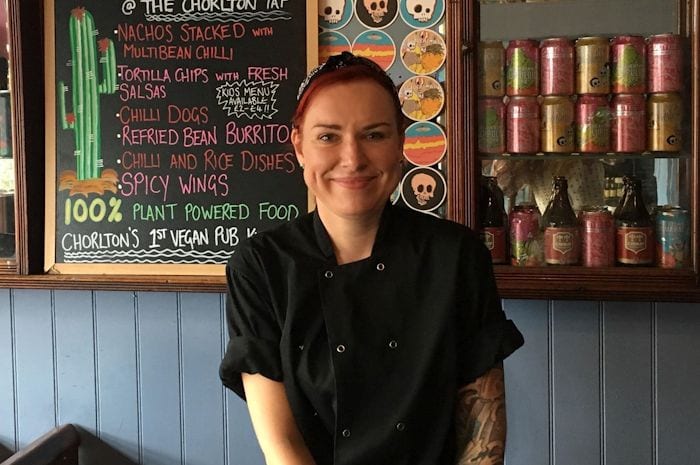 Which pub serves up homemade tacos for breakfast followed by an enormous vegan Sunday roast with all the trimmings?

Mexican meets traditional English may sound like an unusual combination, but it’s already going down a treat at The Chorlton Tap, thanks to Kelly Bucher, who took over the kitchens just over a month ago.

Kelly’s cooking is bringing something different to a pub which has been a local favourite for 25 years.

“I started up with my vegan Mexican street food business Los Antojitos as I wasn’t aware of anyone in the city doing anything quite like it and I have a lot of allergies – including cow’s milk and seafood,” Kelly told us.

“The street food business really took off, and we still have slots at the likes of Levy Market and Stockport Foodie Friday. But it was a really exciting opportunity when Chorlton Tap manager Emily got in touch and asked if we’d be interested in taking over the kitchen. Now we’re here for at least six months.” 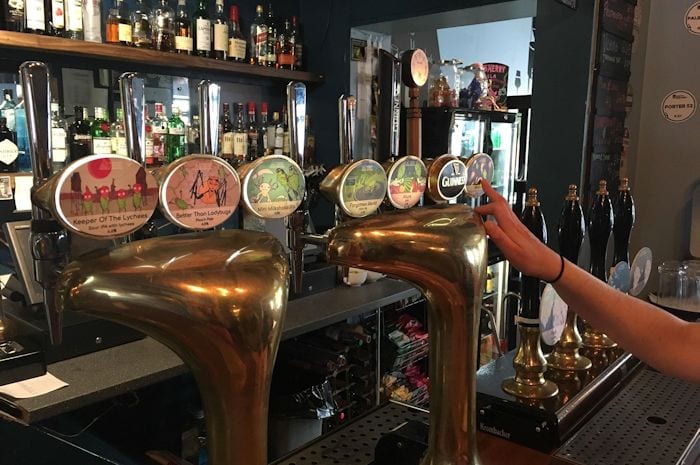 “With vegan Mexican food, everything is fresh and colourful,” says Kelly.

“Unlike many eateries out there, we hand press our own corn tacos and use a number of innovative fillings. One example is cactus, sourced from Mexico itself, and another is Oumpf! – a gluten-free soy-based meat replacement from Sweden.

“It’s all about exciting, accessible food. Not only are the tacos just £1 on Tuesdays but many of our dishes are around the £5 mark. Plus there are a number of gluten-free options – and everything is 100% vegan. We even use vegan honey from Grace’s Vegan Pantry. My boyfriend thought it was the real thing!” 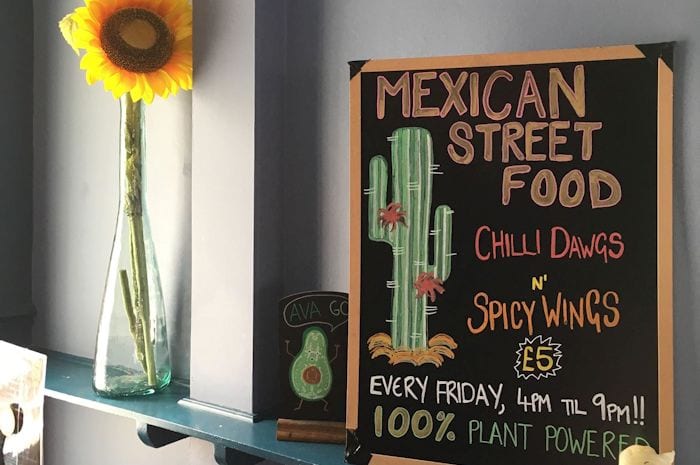 Even the salsas and sauces are completely homemade, with the scotch bonnet chilli sauce a must-try for heat junkies. The sauces have proved such a hit that they’ve been used by  Bundobust and even local brewery Northern Monk, for whom Kelly made bottles of sauce using their Heathen IPA.

“The Chorlton Tap has a number of regulars who have been coming for years,” says Kelly

“And although some of them may have been wary about the new food at first, I can say that all who have tried it have really enjoyed it. That was a big factor behind why we still do a traditional dinner on a Sunday too. The pub used to do a roast and we carried on in that tradition, but vegan.”

This is certainly an impressive roast, with five vegan options to pick from on Sundays from 12 noon until 7pm – or until they sell out. There’s vegan haggis wellington (available as a portion, or an impressive sharer for four at £48), untraditional pasties, a selection of pies and restuffed squash (all between the £8-9 mark), all made on site.

It would have been rude to turn up on a Sunday and not tuck in. So we did. 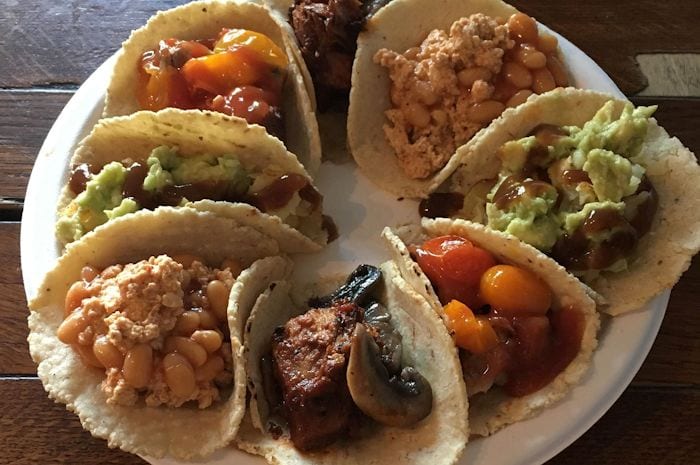 Our meal started with the breakfast tacos (available only on a Sunday 12-3pm) – the soft yet sturdy homemade shell providing a welcome relief from the hard, crisp-like tacos found in many Mexican style eateries.

These were loaded with flavourful fillings, including scrambled tofu, vegan sausage with tomatoes, avocado and hash-brown and, finally, the intriguingly-named Oumph!, a plant-based sensation from Sweden. This was our favourite of them all – a tender pulled texture bursting with BBQ sticky-sweetness.

The breakfast tacos get a thumbs-up from us, though perhaps letting diners put their own brown sauce on, rather than arriving already sauced-up, is the way to go.

We tried the tacos alongside some seriously good ciders – a bold beetroot and carrot for me, and a refreshing pear and chilli combination for my companion.

The pub also offers an impressive range of wines, spirits and beers, including a number of local ales including some from Wander Beyond Brewing (we found an 11% beer from here). 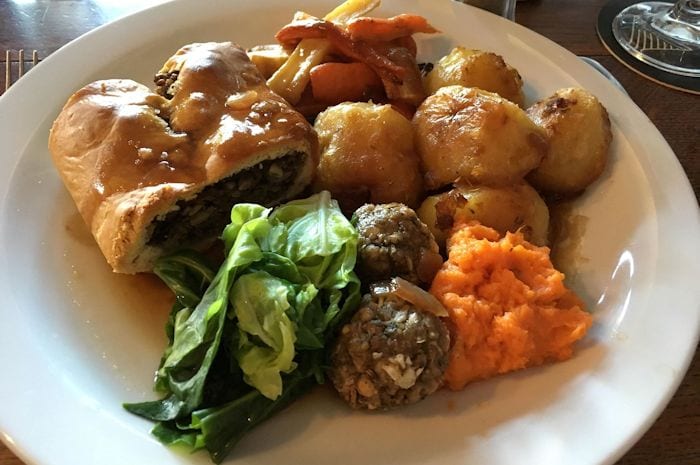 Then came the gloriously generous roasts. My companion chose the vegan wellington – a beautifully crisp pastry case encasing a piping-hot haggis filling, a meat-free variety thick with oats, pulses, and plenty of seasoning.

I chose the restuffed squash, which arrived as substantial roasted wedge, warm with the flavours of nutmeg and dried fruit.

Both our dishes were served with all the trimmings and then some. Parsnips and carrots were roasted to a succulent sweetness in vegan honey and dandelion syrup, complemented by the fresh sage kick from the sourdough stuffing balls. Leafy greens added colour, as did beautifully smooth sweet potato mash.

Roasties were piled generously as they should be – we would have eaten them all day had they been a bit crispier on the outside – accompanied by a glossy homemade vegan gravy in a big boat.

This was comfort food heaven on a plate, sure to satisfy vegans and non-vegans alike. And the portions are generous, too.

There were even vegan scotch bonnet chilli brownies for dessert, which we had to take home having already indulged enough.

With a vegan Sunday roast available for less than £10 per person, this is a place where you can indulge without damaging your bank balance.

With wonderfully warm and relaxed service and a chilled-out atmosphere, we’re already looking forward to coming back to try the Mexican weekday menu.