Indie band Elephant Trees have had quite the successful start to their career since moving to Manchester last year.

The four piece group making waves with their unique and unmistakable sound started out as a school project between lead singer Martha Phillips and guitarist Sam Hugh-Jones.

After realising that they had a knack for performing together, they upped sticks, moved to Manchester and welcomed two new members to the band. And in a short space of time they have already achieved some pretty amazing feats together.

In November last year, the group were lucky enough to perform at the Royal Albert Hall in London.

“It was part of Music for Youth Proms. They helped us with one of our tracks where they provided an orchestra for us and really brought the whole track to life,” says Martha.

“It was a mind blowing experience to play at song at the Royal Albert Hall. It was amazing, the venue is iconic and it’s just such a big deal for us.”

“And you know that cheesy moment at stadiums when all the crowd put their phones up with their lights on – the audience did that for one of our tracks and it was amazing. We came off stage crying because of it.” 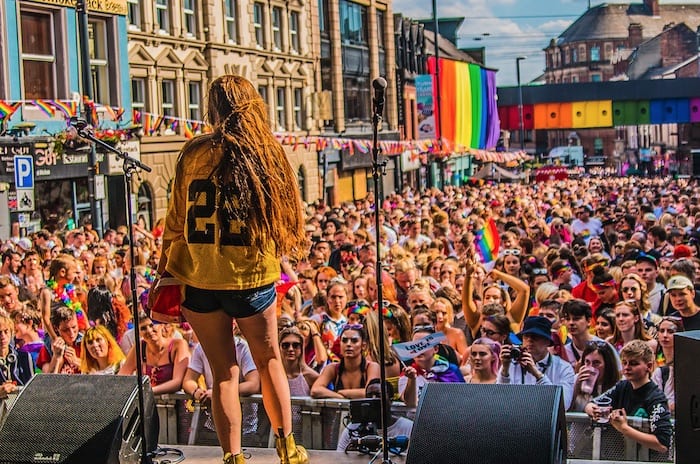 And that’s not all. Last year the band performed at Kendal Calling in the Lake District.

“That day it was absolutely tipping it down and we woke up with a puddle in our tent and I could have cried.

“We were playing on one of the outdoor stages and genuinely thought nobody was going to turn up. But thankfully, I don’t know what it was but something made people go crazy and stand outside in the rain to listen to us. It was a full crowd and it was incredible. It’s a real milestone for us.”

Martha also entered Fender Undiscovered Artist of the Year campaign and found herself in the top three finalists.

“It was an online entry form – and from that I made it down to the top 8 entries and then went on to perform for them. They then narrowed it down to top 4 with both a public vote and judges vote.

“I made it into the final which was broadcast live. It was really cool and at the time was one of the most professional jobs I’d done. They were so supportive that they even gave me a guitar. I didn’t win the competition but I made it to the top 3 which was incredible.”

“I wrote 4100 about the things we use to distract us from life. It’s so easy to get comfortable wallowing in dark places. I wanted to depict the juxtaposition between that comfort and the need to bury it under various crutches.

“It’s different in style to our earlier music but I think that comes from a place of growth. We’re moving away from straight up angry rock because we’re not angry teenagers anymore, we’re coming at things from a different angle with a different perspective.

“It’s our best track – we’ve thought a lot about it and put a lot of time and effort into it. When you listen to it you might not know where it’s going or where it will take you but we’ve worked hard on it and i hope people can hear that when they listen to it.”

Martha says it’s difficult to narrow the band down to one genre as they have a variety of influences and sounds.

“If it was on an iTunes selection it would probably be classed as alternative rock. But there’s so many different genres that come into it that we can’t give a straight up answer.

“It’s pop structure, with our own personal influences. Experimental, jazz. Structure-wise it’s pop, it’s a little bit heavier than your standard pop song but the lyrics and the way we write our songs really ties it all together.”

She believes that Manchester has been vital to the band’s development and that making the move here was key to the band’s success.

“Manchester has been integral to this band’s growth. A few of us grew up in Leeds but as soon as we came to Manchester I felt like we were given the freedom to be as creative and experimental as we’d like.

“It’s a very accepting city. You can walk down Canal Street in a rainbow feather boa and nobody would bat an eyelid. I think Manchester’s community and the vibrancy of the city has really helped us to experiment and find ourselves as a band.”