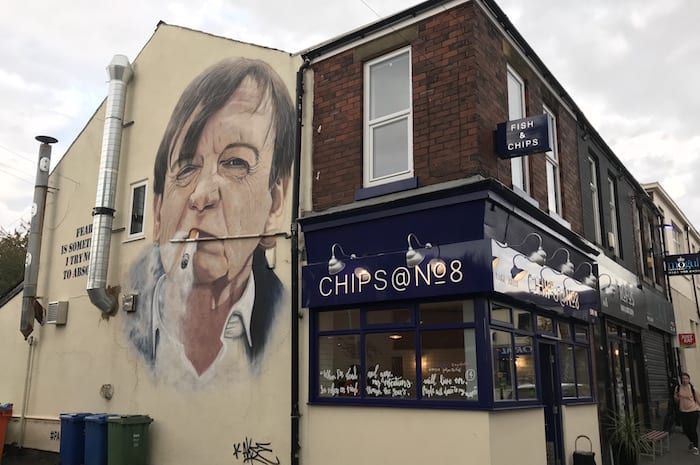 A massive mural of Mark E. Smith painted on the side of a chippy in Prestwich village was completed earlier this week. The 20ft painting by Akse P19 is close to where the late Fall singer spent most of his life.

“Mark E. Smith is synonymous with the area and the opportunity to have such an iconic figure on the wall here was a no-brainer,” says Chips@No.8 owner, Dan Edwards.

Dan, 42, bought the shop in March and opened its doors just nine weeks ago.

“The first Friday we opened, people were queuing down the road, around the corner. We weren’t prepared for it – I had done no marketing, I just opened it and turned the lights on. My idea was that we’d grow organically, but right from the word go it’s been intense.  We’ll manage it in the best way we can, and have even got extra fryers in the back to cope with chip production! 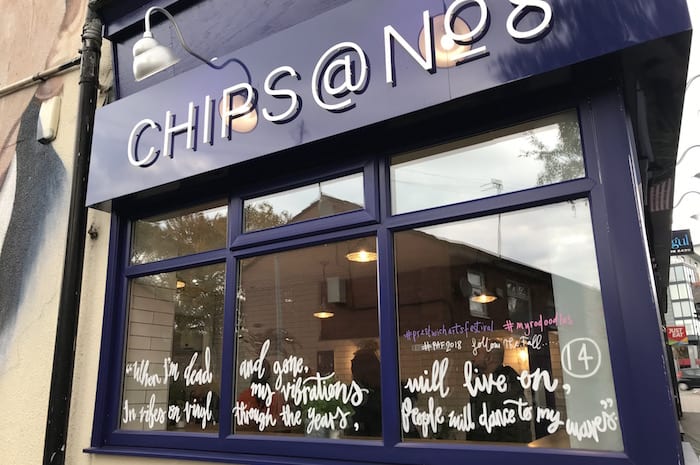 But it was the mural which really put the chippy in the news.

“There’s a lot of interest in the mural,” says Dan. “It’s become a bit of a mecca for Fall fans. I wasn’t party in organising it – that was the Prestwich Arts Festival guys, who had identified my wall as being the most suitable. They approached me and of course I agreed.

“I don’t think the mural has necessarily brought in more business – that wasn’t really the intention – but it’s really put Prestwich on the map. People are coming to look at the mural, and that’s great. Coverage has gone national too – we had Granada Reports down here last night, it’s been in The Guardian, on the radio, and Dave Haslam was tweeting about it. Hopefully, it will benefit all the businesses in the area with people coming and seeing what wonderful Prestwich has to offer.”

The mural, which features Mark smoking his trademark ciggie and the words ‘fear is something I try not to absorb’ (from an interview in The Guardian), connects with the Mark E. Smith many people saw around Prestwich. 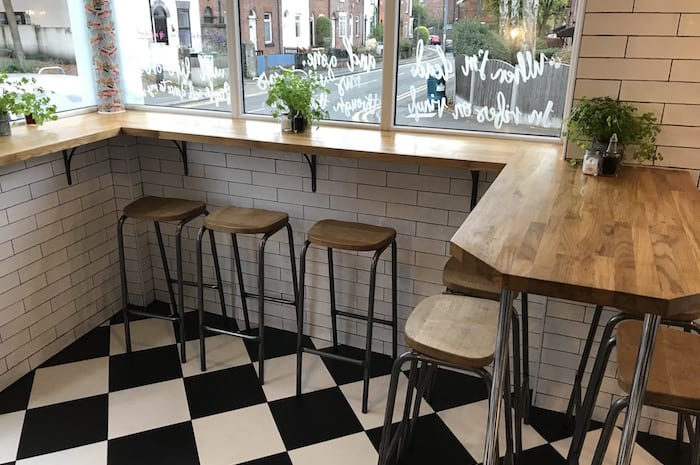 “I would see Mark around a lot, perhaps not so much in the last ten years, but much more when I was younger. When I was out with friends, we would often go to The Woodthorpe and Mark would be drinking there, too. We would be playing darts and he would yell obscenities at us now and again. We were very aware of his presence. An abrasive character, that’s just the way he was. You didn’t have to defend yourself though, you just soaked up the abuse.”

But it’s not just the mural that makes the chippy so special. It’s become popular with people who appreciate the generous portions of fish and chips made from the finest, freshest ingredients.

“As far as I know, Chips@No.8 is now the only chippy within the M60 cooking in beef dripping – and we of course have vegetarian and gluten-free options too. There are a couple of chippies that do their chips in dripping, but not the fish like we do.”

And it’s not just how the food is cooked that is special here – it’s the quality of the grub, too. 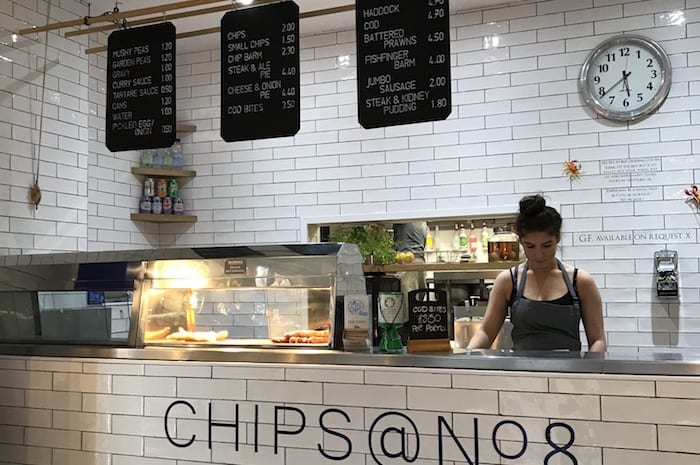 “It’s always fresh. We get daily deliveries. It’s important that everything we have here is the best it can be,” Dan stresses.

This includes fresh fish, hand-cut chips, homemade tartare sauce and mushy peas made on site – with absolutely nothing from frozen.

“We get our pies from The Great North Pie Company, as they really are the best. Certainly not the cheapest but I wanted them on the menu. Plus our sausages are delivered fresh from the local company Grandad’s Sausages – which we grill then oven bake.

“We’re looking for a quality locally-made rag pudding but until then Holland’s is perfectly good and what people round here really enjoy. 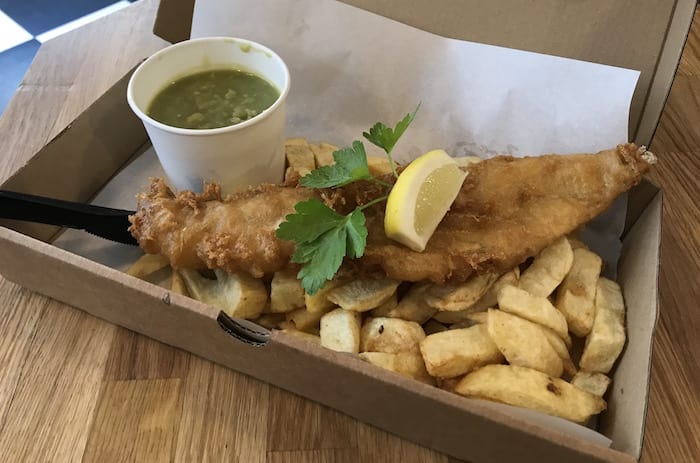 “We do get ridiculed because I’m not selling more Holland’s Pies, but try the Great North Pies and if you don’t think this is the best pie, I’ll give you your money back. Nobody has taken me up on that!”

And there’s another reason the chippy has been turning heads.

Dan was a hospitality expert at some of Manchester’s finest establishments including The Eclectic Hotel Group and Hawksmoor when he decided he needed a change and opened the chippy. So rather than your standard metal counters and cheap tiles, the chippy’s interior is really rather chic.

“During my time in hospitality I was used to working in beautiful surroundings and my vision with Chips@No.8 was that I wanted it to look like an Eclectic Hotel bathroom! I think Sally O’Loughlin, one of the Eclectic Hotels designer, is an absolute genius.” 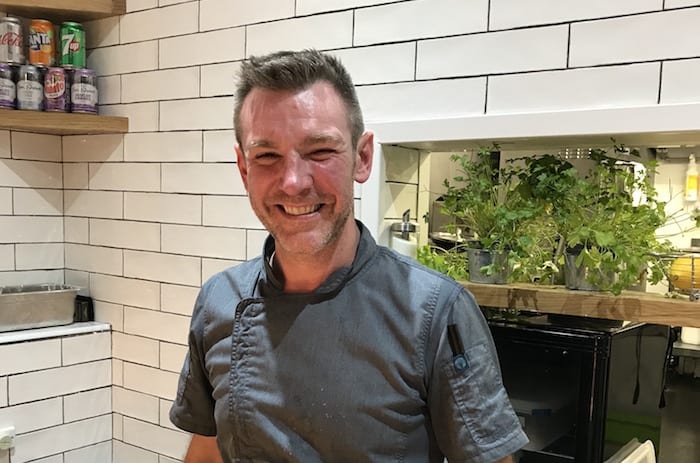 It’s clear that Dan is determined to bring fine food to a chippy format – part of a growing culinary scene in north Manchester.

“Whitefield is getting more of a formal dining scene, but there’s a buzz about Prestwich, too. Five or six years ago people would have a drink in a pub and go to town, but now Prestwich is a destination. People are coming and staying. It’s a great little scene with lots and lots opening.

“It’s great for Prestwich. It’ll never be the new Didsbury like some people say, but that’s because we’re doing our own thing here, concentrating on quality rather than volume. More people are looking for quality artisanal produce locally sourced and Prestwich is increasingly the place for that. It’s great to be a part of. It’s the centre of the world, don’t you know?”