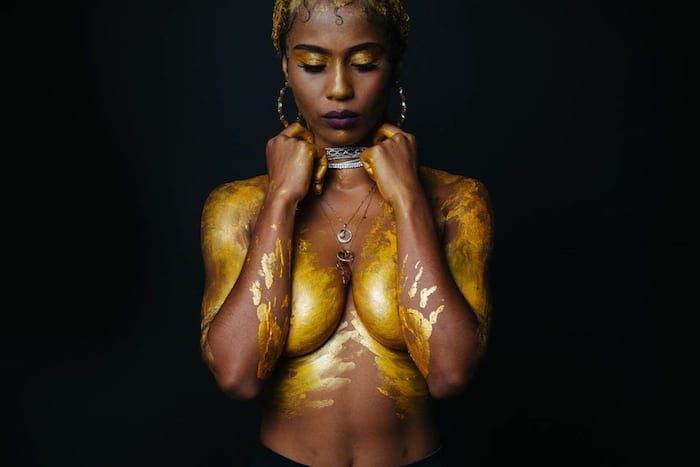 Music’s always been at the heart of the 0161. Our history proves that. From the heady rock ‘n’ roll peak of the Smiths, the Stones, New Order, and Joy Division, to the Mad Fer It heyday of Oasis, not to mention Factory Record’s iconic Hacienda scene, it’s clear that when Manchester commits to something it damn well does it all guns blazing.

Things move on, however, and we are seeing an invigorating new wave of Mancunian artists setting the country ablaze with a unique blend of sounds, incorporating influences from trap, soul, hip-hop, and grime. Embracing a self-made ethos, each and every one has their own sound and is busy reshaping the UK’s idea of what so-called ‘urban music’ is meant to sound like.

So without further ado, let us introduce you to the up-and-comers standing on the shoulders of the Mad Fer It giants and bringing the noise in 2018.

If you’re not already au fait with IAMDDB, let us get you acquainted. Blending the disparate sounds of trap and jazz into her own uncompromising style, her track Shade was undoubtedly the biggest tune to come out of Manchester last year – currently at 9 million views on Youtube and counting. Recently profiled on The Guardian, named Giles Peterson’s breakthrough artist of 2018, and coming in third on the BBC’s Sound of 2018 list, she looks set for an incredible year ahead. This month sees the independent artist team up with Red Bull to bring four sold out concept shows named after her forthcoming mixtape, Flightmode Live, to Manchester, London, Bristol and Birmingham.

[KSR] sprang on to the Manchester scene last year pretty much out of nowhere, gaining popularity through a handful of hard-to-find Facebook videos, and took our breath away with his incredible soulful vocals. Oozing soul over a mixture of mellow and trap-style beats, there’s still that undeniable air of Mancunian swagger about him. At only 19 he’s already accumulating fans a-plenty by way of The Mouse Outfit and Children of Zeus. With some interesting collaborations already in the pipeline, we look forward to hearing more from him this year.

LayFullStop is considered by some to be Manchester’s very own neo-soul queen. First catching our eye as part of Manchester collectives Roots Raddix and Cul De Sac, her solo work blends the sounds of jazz and soul with old-school and UK hip-hop influences. Not only can she hold down a tune with pzazz, she’s an impressive MC as well. If we had to compare her to somebody, we’d have to say Lauryn Hill. But that probably wouldn’t do either of them justice.

Part of the Free Wize Men collective with fellow Manc rappers Kiva Bey and Afro Sam, Blind Mic aka Skrrrrt Cobain has a really cutting way of writing rhymes, his lyrics cut straight down the line. Rapping over beats that mix together hazy melodics with tight trap and hip-hop drum beats, he’s all about the grind, and also puts out music as part of Budget Boyz (with Sangy and Berry Blacc) and Lychee (with LayFullStop and Don Zulu). With some big projects planned for later in the year, including something with Future Bubblers, keep your eyes on him.

Since dropping his stellar sophomore project Mellow Mermaids and Malibu last year, Manchester rapper KinKai has wasted no time building up a strong fanbase. He’s spent the past few months tearing up shows the countrywide and jumping in the studio with established local hip-hop crew The Mouse Outfit. Keep your eyes peeled for his contribution to their new album Jagged Tooth Crook – always a great indicator of Manchester’s up and coming musicians – which is set to drop next month.

Rapper, singer and producer HMD was born in Somalia and comes from a clan renowned for its lyricism. Drawing from a range of influences, including time spent growing up in Denmark before moving to Manchester in 2001, his debut project W16NTER offers up a fusion of potent writing, pop sensibilities and hard-hitting urban production. Gaining shine on the local scene with the help of the likes of BPM, BiPolar Sunshine, Sleazy F and Abnormal Sleepz (more on him in a bit), we look forward to hearing more from HMD this year.

Hailing from Old Trafford, Stef Smith’s sound blends influences from grime, trap and southern American hip-hop to create what is becoming a distinctly Mancunian sound. Maybe this is helped by the fact that he works with producer Deiago, who has also helped craft the sound of IAMDDB (notably creating the beat for Shade) and peers Sleazy F, Black Josh and BiPolar Sunshine over the past few years. Last year Stef was asked to make a specially commissioned song for BBC 1Xtra called Manchester Live which you can check out the visuals for above. Another artist we’re keen to hear more from this year.

Nigerian-British artist Tobi started catching some shine in Manchester when he headlined the Iluvlive x MOBO Unsung tour up here last year. A hip-hop and spoken word artist, his musical style weaves together rich African rhythms with urban beats, whilst his lyrics tackle important social and racial issues plaguing our society. Ending 2017 with the release of his new EP City Of Dreams, which is coincidentally all about his love for Manchester, we are expecting great things this year.