By day, Elliott Maguire works as a security guard at ITV, MediaCity. By night, he hones his craft – filmmaking.

In an ambitious juggling act, Elliott filmed his debut feature film The Ferryman on his iPhone. It may also be the first English-language film to be edited on iPhone, too.

The Ferryman follows the story of Mara who, after a failed suicide attempt, finds herself terrorised by a malevolent entity intent on destroying her life – and anyone she cares about.

The film is derived from Greek mythology, and perfect inspiration for Elliott’s first feature length film. 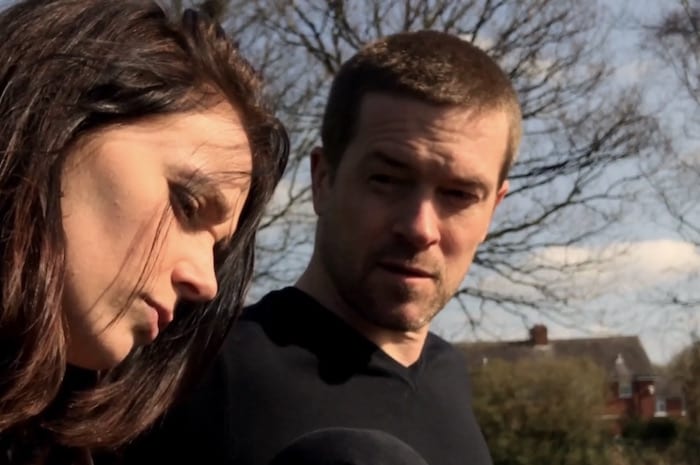 “I’ve always thought the ferryman in Greek myth was such a visually interesting character, and one that was ripe for exploration in a horror film. So I came up with a story around it that was very commercial, along the lines of The Conjuring.

“But as I was rewriting and researching and really looking into it, I started to find the human characters more interesting than the villain, so began focusing on them. So it went from a mainstream, jump scare-filled horror to a more arthouse, surreal, character-focused film, that hopefully explores the themes of mental illness, suicide and the effects on others in an thought-provoking way.”

The film was shot completely on location in places like Little Hulton, Swinton, MediaCityUK and even on the world famous Coronation Street cobbles. Most of the cast are also from Greater Manchester, a very important and conscious decision made on Elliott’s part.

“I’m proud of where I’m from, and have always noticed the cinematic potential in Manchester – something I don’t think has been explored enough.

“One of the issues I found in trying to get films off the ground was that funding and production companies were specific to London. I would have had to shoot in London, with a cast and crew from London, and I could never understand that. Manchester is amazing, and I found the most amazing cast and crew that are so incredibly talented and hardworking, and I’m sure have very bright futures ahead of them.”

A recent survey by Pact found that of the £2 billion budget for UK commissions in 2016, just 32% was spent outside London. Furthermore, just 35% of full-time jobs in TV are shared between the other nations and regions.

“Manchester has a pretty thriving TV and film industry, obviously with MediaCity, which is great, but there’s still a culture of ‘who you know’, which can make it difficult. We need more working class filmmakers who have the talent, and choose to just go out and make stuff with what little they have, to really put the place on the map – show our colourful streets and characters, show the world parts of this wonderful city they won’t have seen. Grassroots filmmaking is what will put Manchester on the map.”

The Ferryman is deeply rooted in Elliott’s favourite genre: horror. Work by auteurs such as David Lynch were key pieces of inspiration for both the film’s aesthetic and narrative. “I wanted to go away from convention and create a very nightmarish, surreal feel, where logic comes and goes and we’re plunged down the rabbit hole with Mara.”

Elliott believes using an iPhone was an ideal choice for someone with very little experience when it comes to filmmaking.

“I could learn on the go and in my spare time, and we could set up shots and things so much quicker than if we were lugging around a big piece of kit. The same with the editing – I did it all in my spare time and it was incredibly user friendly.”

Despite the classic iPhone pitfall of poor battery performance and storage, it hasn’t put Elliott off using it again.

“I’ll definitely be shooting on it again, taking everything I’ve learned from the experience and rectifying the issues we had. I do think there’s a bright future in smartphone filmmaking.”

And Elliott thinks Youtube is a free and thorough film school at your fingertips.

Finally, does Elliott have any advice for his fellow film fans? “Seriously, just go out and do it. Go and make your film. Stop stalling, stop waiting for that funding, stop overthinking it.

“No matter how much money you raise or how prepared you think you are, you won’t be. So just learn what you can on roles that you are going to take on, get a small and willing team together, and make something with what you’ve got. It doesn’t matter whether it’s good or not. What matters is that you have fun making it and you learn from it.”

If you want proof that it can be done, check out The Ferryman on Vimeo and Amazon Prime where it’s free to members.