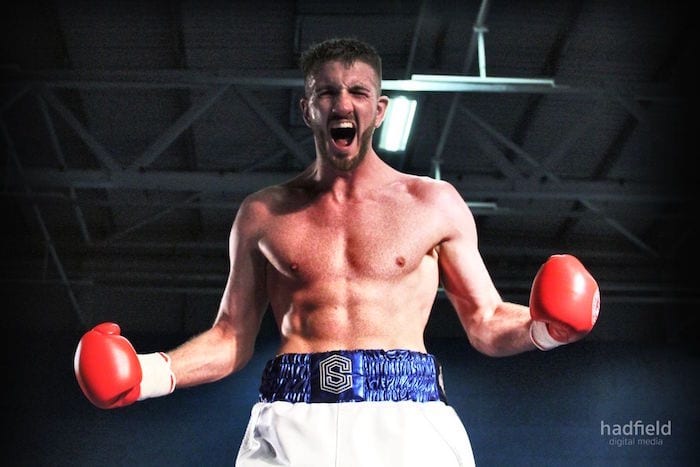 Charlie Schofield is creating a bit of a buzz on the Manchester boxing scene.

The Droylsden light-heavyweight turned pro in late 2014 and currently boasts a professional record of 13-0.  Starting out in the gym at an early age, he was determined to succeed in the boxing ring and emulate some of his childhood heroes – especially a fellow Manc.

Charlie is showing a commitment to training harder and harder for each fight in a bid to reach his full potential. He also has that great Mancunian sense of humour which is always a bonus.

We sat down with him at the recently refurbished Grosvenor Casino Soames in Manchester’s Chinatown. As I tucked into some lunch ordered from the brand new menu –  Charlie has to abstain due to his upcoming fight – we talked all things boxing and Manchester. 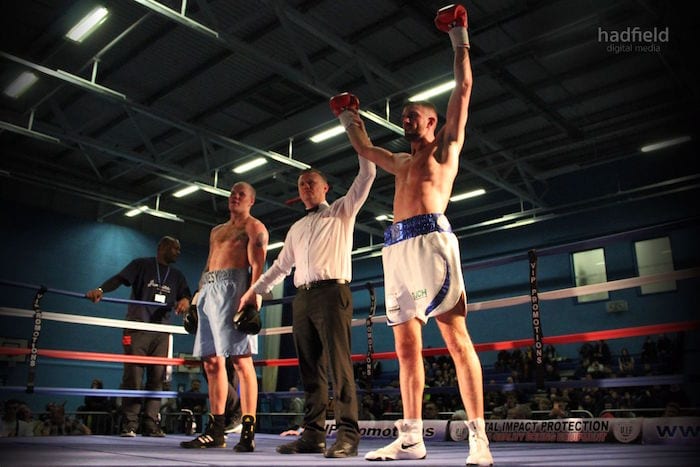 100% blue. I’ve been a season ticket holder for years.  It’s great to finally see us doing so well too I think any proper City fans are still not celebrating the league yet as we know what we are like. But we should wrap it up and hopefully have a good chance to progress in the Champions League as well.

What prompted you to take up boxing and what age were you?

I remember my dad taking me to the gym aged 9 or 10 and I just remember really enjoying hitting the bags and pads and running round like a lunatic.  I just really enjoyed the atmosphere and went to a couple of different gyms and it progressed from there. You’re allowed to turn amateur from the age of eleven so that’s what I did.  I had my first fight and won, so obviously that was a top feeling that nothing could really top as a kid. I wanted to do it again so I basically pestered my dad to take me again and it went from there really.

How important do you feel grassroots boxing is to young kids growing up?

Obviously growing up as a kid in any city there’s a lot of opportunities out there to go off track, be it drugs, smoking, drinking etc. They are all very easy to come by even at the ages of eleven, twelve and thirteen. I had a lot of friends going out getting involved in those sorts of things but boxing kept me focused. The reason I use the word focus is because it kept me off the streets and in the gym.  On a Friday night I’d be finishing school and straight to the gym and when I finished training I’d be waving to my mates on the other side of the street who were going in the local shop. I’m going home with a black eye and a bloody nose.

Who inspired you when you were younger?

I’d watch other fighters on the TV. I’d watch fighters like Ricky Hatton – being a blue as well it felt closer, really.  I remember going to Maine Road and there was a big buzz about him, and then when when he boxed there it was amazing, he was an inspiration to me growing up definitely.

If you could fight any boxer of any era, who would it be and why?

There’s many that I wouldn’t mind watching live from years ago. People like Mike Tyson.  I’d love to watch him but I don’t think I’d want to fight him. To watch him live would be great but yeah I’d do that one ringside not actually in there with him.

When you’re not in training what’s your favourite cheat meal?

It’s whatever I’m teased with when I’m in training.  Something I really struggle with is Pizza Hut.  They will text me on a Friday night and I’ll think ‘awww I wish’, then I’ll get another one on a Tuesday night and they’ve got a Champions League bundle. Get a stuffed crust, then you’re thinking ‘it’s cheaper if I get a large’, and before you know it you’ve done £40 in on Pizza Hut.

It’s actually called The Phoenix Camp now.  It used to be owned by Bobby Rimmer who used to train me but we’re now trained by his son Rob. Bobby was partners with Billy Graham and they had the Phoenix Camp so Better Bodies has just been rebranded really.

What music is playing when you are training in the gym?

Oasis are ace. Anything of theirs I can easily listen to. It’s music that gets you hyped and keeps you motivated.  For my last two fights, my ring entrance music has been Rock ’n Roll Star. I love the start. The guitar and drums really give me a bit of a buzz. I was doing a bit of sparring over in Norway to promote the sport of boxing but didn’t realise it was like a proper event so the guy asked me what ring music I wanted so I said get me a bit of Rock ’n Roll Star by Oasis and he had no clue who they were.  I told him to You Tube it.

Who do you feel would provide the biggest challenge at this stage of your career?

My last fight pretty much just secured me a place in the top ten so that’s put me in the mix with a few good fighters. But I’m not at the stage where I have a particular rival.  So I’m just working hard and pushing on trying to get myself into the top five and then go on from there. It’s an interesting division with a lot of talented fighters in it which makes it a great time to be involved as there isn’t just one person dominating the division. There’s a lot of great fights out there and people want to see entertaining fights, so hopefully that’s something I can provide.

When you win a fight in front of a home crowd in Manchester, where’s the after party?

It would be straight here at Grosvenor Casino. They’ve always looked after me since I started and I love the atmosphere so yeah get cleaned up, shower changed and back here for the after party.

My favourite thing about Manchester is it’s a city that never sleeps.  I know it isn’t particularly known for that, but for me you can go grab a coffee at pretty much anytime of the day or night, or go get yourself a beer. It’s pretty much open 24 hours and I love the fact that no matter what time it is you go somewhere there’s always people about.

Charlie’s next fight is at Victoria Warehouse on May 5.