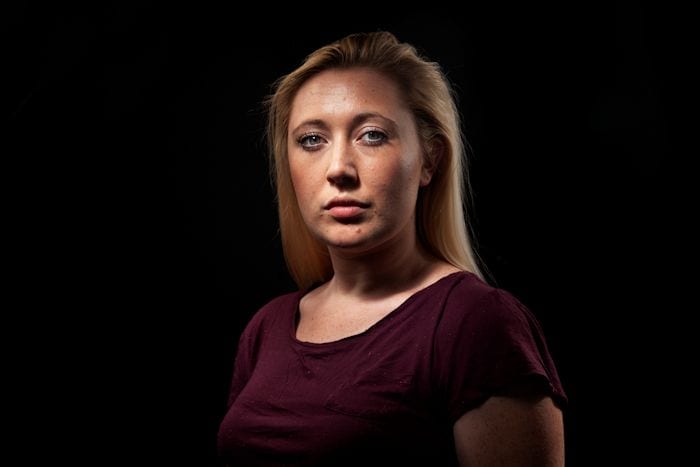 Former Coronation Street actress Melissa Johns is back in town. She’s playing Emilia in othellomacbeth, a condensed production of two of Shakespeare’s most brutal and poetic plays at HOME later this month.

Melissa, who was born with part of her arm missing, is co-founder of The Triple C with Cherylee Houston, who plays Izzy Armstrong in Coronation Street. It’s a collective of  disabled and non-disabled creative individuals which runs projects breaking down the barriers for people with disabilities in the arts.

She admits that when she first started her career, she felt daunted by the long fight for acceptance and says she still has days when she feels drained. What keeps her going is contributing to change and making others feel accepted.

“When I was on Corrie, I had a few people messaging me to say they have younger children with a disability very similar to mine who have been born without an arm. Even at a young age they were hiding it away a lot. When they saw me on Coronation Street, one little girl started running around saying ‘There’s a girl like me on TV’. And that’s the thing. Growing up I didn’t see anyone like me on TV.

“There’s a lot of disability hate crime and society can sometimes be a bit awkward with disability. But the minute you start putting disability in story lines, on stage, on screen, in adverts you will see this incredible knock-on effect and I’ve been very lucky to work with such wonderful people who are so open.”

Melissa says one of the main reasons othellomacbeth is a must-see is the fact that it’s very relevant today, despite having been written hundreds of years ago.

“Our director, Jude Christian, who is Manchester-based and who is absolutely phenomenal, looked a lot at examples like the OJ Simpson case. It’s a fight for justice and it’s very brutal but also incredibly poetic.”

Emilia, the character played by Melissa, is a victim in a toxic marriage to Iago, who murders her in the end.

“Emilia is one of my favourite Shakespeare characters. She’s got real thick skin, a massive heart and she is so aware of her surroundings, always calculating things in her head.”

“Because what that does is it opens up something very beautiful and very real. I’m able to use my back story and my disability so much for Emilia,” she says.

“Sometimes you could look at me and say, yes physically I have one arm but the character would have two, so disability doesn’t come into it. However, sometimes there are such beautiful opportunities to use the emotional side of it and I definitely used that for Emilia.”

“For me Manchester is the best city in the world, I love it. I honestly couldn’t be more in love with the place if I tried.

“I made a very brave decision to move here because I only knew two people here. I lived in London before that so I thought, you know what, I’m just gonna try it and I was very lucky to have a lot of opportunities like Coronation Street, which was fantastic. If I could continue in any way to have this wonderful balance between theatre and TV work, that would make me a very happy and grateful girl.”

Theatre is more accessible in Manchester, than in London, Melissa believes, because it doesn’t require an hour-and-a-half journey. But there is still a work to be done before theatre becomes available to everyone, she says.

“When I say ‘accessible’ I mean it on so many levels. I’m a campaigner for equality in the arts and I think theatre should be accessible from a disabled point of view. Manchester is hitting the nail on the head with that which is fantastic.”