Meet the artists behind Bee in the City: Kathleen Smith 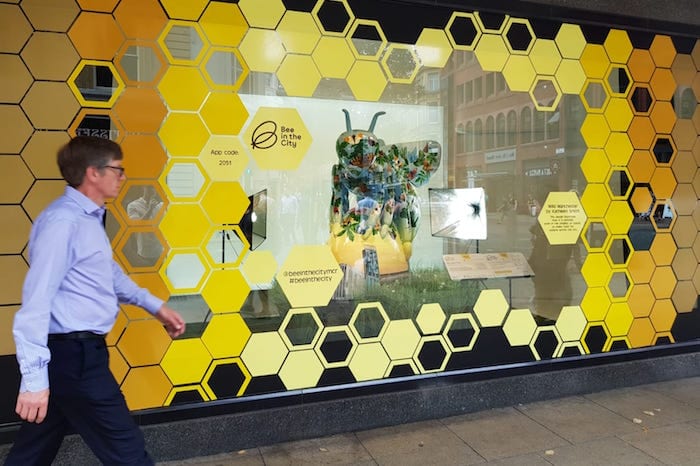 Take a stroll down Deansgate and you’ll find a rather beautiful bee sat in one of the windows of House of Fraser.

The base of Kathleen Smith’s Wild Manchester sculpture depicts some of our most famous buildings including the Great Northern Warehouse and the Hilton, while the body is covered in butterflies and green leaves.

But there’s more to this bee than just good looks. This is a bee with a message.

In the 1950’s, there were over 50 native species of bees in the UK. Now there are only 25. The rest have become extinct. And the number of non-native bees has increased.

“The idea behind the design was to get the idea across that the bee population is declining in this country,” says Kathleen.

For a city that celebrates the worker bee, Manchester isn’t actually that bee-friendly. Nor is the rest of the UK.

But even if you’re living in a city like Manchester, there are things you can do to help the bee and butterfy population.

“Even if it’s just a little pump or a window box, you know every sort of little thing helps really.”

It took Kathleen three weeks of working from eight in the morning till eight in the evening to finish it, in what she found a challenging process because of the hot weather.

Seeing her bee in House of Fraser’s window display surrounded by honeycomb, grass and flowers made the effort worthwhile. And the fact that people stop to look at it, take a picture and ask her questions about it, make her feel incredibly lucky.

“It looks fabulous,” she says.

However you chose to look at the Bee in the City initiative, there is only love and positivity, says Kathleen.

“First of all it’s really good for artists to get their work out there and be seen by so many people. Then it’s really good because it encourages people to get out and walk around, especially children who love trying to find all the best stuff going around the city.

“And obviously there’s the fact that at the end of the event, all the bees get auctioned off to charity.”

And the bee trail makes art accessible to everyone. “People can sometimes feel a bit weary to go in galleries and see artwork, whereas this makes it easy for people to come and see it  – and it’s a fun project.”

Kathleen loves getting involved in community projects. This is the eleventh sculpture she has done which is part of a trail. Her first was Snowdogs by the Sea in Brighton.

“I love doing these projects because it’s great when you go and see your sculpture and you get to see all the little kids being so into it. It’s so much fun!”