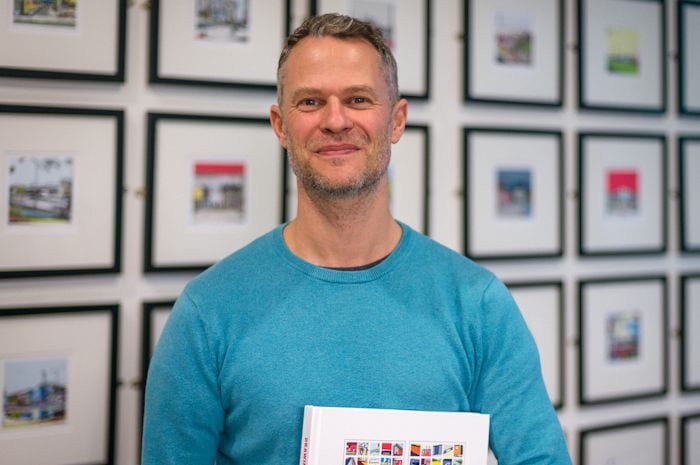 When Jamie Edwards drew the grounds of Notts County and Nottingham Forest back in 2004, he had no idea that this would be the start of what would become a huge project.

Since then, he has travelled more than 25,000 miles to draw all 92 Premier League and Football League grounds in England and Wales.

But it was only when he got a stall at Manchester’s Christmas markets that he realised how much interest there was in his stadium drawings.

It then became evident, he says, that this was a project worth pursuing. So he embarked on a 12 year journey which has resulted in the publication of Drawing The 92, a collection of illustrations of stadiums across the country. 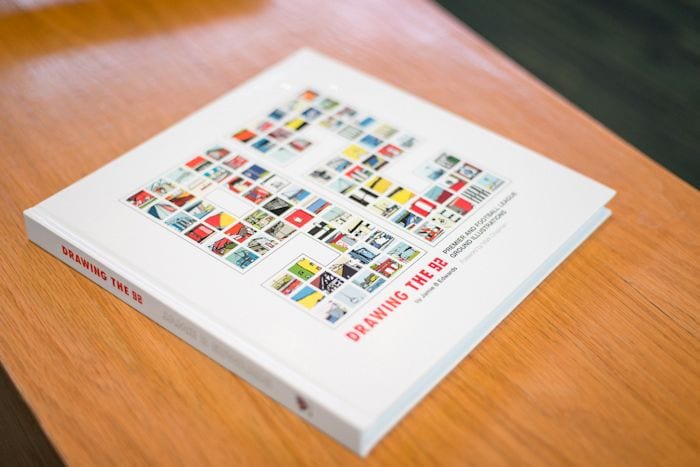 Jamie, 41, has always loved architecture, painting – which he has a degree in – and football, and found a way to combine them in what has become a massively well received project.

But the book is about much more than football.

“It is about the colour and architecture of a venue that could be as relevant as a cathedral to some people,” says Jamie.

“As a football fan myself, I remember going to games as a child and the ecstatic feeling that I got from being in a crowd and feeling a slight danger in the night time when the policemen on horses were walking about and foreign smells everywhere. It was quite evocative.”

Jamie says that he has tried to capture this in his drawings whilst enjoying a real adventure getting the best views and angles.

“Getting in places that are difficult to get to and being persistent and diligent and not leaving until finding a way to get there.”

Any view that shows a range of architecture around the ground inspires him.

“For example in my Charlton picture, I’ve got 50s flats, there’s Victorian terraces and then there’s Canary Warf in the background.

“I also like the angular shape of grounds, so I like the stands. They’ve got this really unique shape, certainly the older ones. Floodlights are another great aspect of football grounds. I really enjoyed drawing those.”

Getting the right view to start the drawing was another major challenge.

“It’s like staying at the bottom of a cliff and trying to draw the cliff but you can only stand 10 metres away. It’s an impossible task. You can take a photo but I can’t bear the distortion that a lens will give you. So then it’s all about getting height and that is great fun and I love that. It’s a real adventure and I never know how I’m going to do it. And it involves knocking on doors, climbing hills, trespassing and all sorts of things.”

He admits, however, that some stadiums are almost impossible to draw.

“Some are just a wall at the end of a street. Sometimes I get fed up trying to draw the white poles like for the new Anfield ground and the Olympic Stadium. They can be quite laborious and characterless, so not particularly rewarding.”

It’s difficult for him to chose a favourite drawing out of the 92 because sometimes it’s the adventure behind it that matters more.

Jamie laughs when he reminisces about the time he had to knock on someone’s door in Paris to get the right view of the Parc des Princes, PSG’s ground.

“I’m terrible at French and to turn up on a Sunday and to actually get into someone’s house in France into a really nice apartment with this lady and her friend and for her to be happy for this guy from England to stand there and take photos and sketch the ground from her balcony, was quite unique.  I’ll never forget that.”

When he started out, Jamie was very interested in the relationships between shape, line and colour in 2D and creating some sort of pattern. But that’s changed now, he explains.

“My work has evolved and it’s much more illustrative. And I’m more interested in recording what’s there at the time rather than distorting it or making it abstract with colour.

“I’ve almost gone the wrong way,” he jokes, “and I’m less abstract than I used to be. As an artist you’re supposed to free up and become more abstract, I guess.

“My relationship with football has almost transcended to being a spiritual one and it has nothing to do with the players or the managers or the results, which I believe are quite trivial matters. I am trying to offer football fans a more artisan alternative.”

Living in Lymm close to Manchester, surrounded by so many grounds and supportive people, has been the reason his project has been so successful, he believes.

Drawing The 92, a high quality hardback which includes all the illustrations, brief descriptions of every stadium as well as recollections by celebrity fans and ex-players, is available to purchase here.

Jamie’s collection of drawings will be on display at the National Football Museum until the end of January.