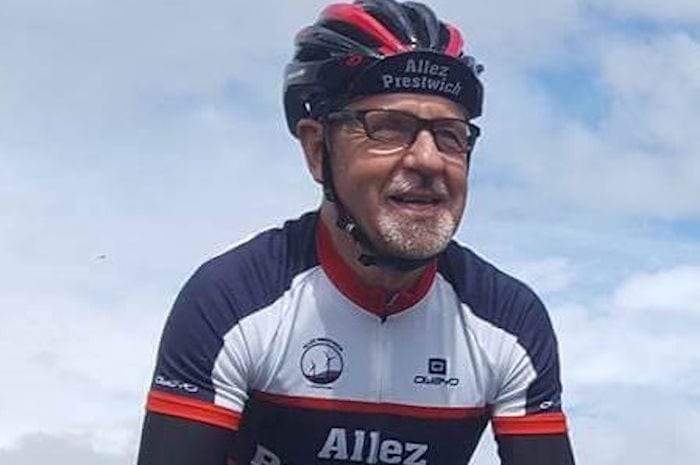 When Chris Froome stepped on to the podium on the Champs Elysees on Sunday having won the Tour de France for the fourth time, he received a champagne reception and a cheque for almost half a million pounds in front of an audience of thousands, with millions more watching on TV.

He deserves every penny. He had cycled 2,200 miles over a gruelling three-week period. But the furthest he had to cycle in a day was 139 miles. And he had the support of one of the best teams professional cycling teams in the world and, of course, his fellow Team Sky riders.

When Mark Leigh arrived at the Abel Heywood pub on Thursday night at 10.30 pm, he was greeted by a small group of family and friends and had a pint of Hyde’s Original Bitter.

He had cycled 215 miles in 16 hours with his mate Dan, followed by another mate in a car loaded with water, spares, jelly babies, flapjacks and warm clothes. He had raised over £2,000 for Macmillan.

The furthest he had cycled before was 130 miles. And the most demanding thing he’d done for charity was grow a moustache.

To put his achievement into perspective, think of the toughest physical challenge you’ve ever endured. The furthest you’ve ever run or swam or cycled. Then add another two-thirds.

He had set off from Marylebone in London at 4.30 that morning, having prepared for the toughest challenge of his life with regular spin classes – “with a few rides over 100 miles, ridden at as fast a pace as I could stand”  – and by riding at weekends with his club, Allez Prestwich.

“They have a very disturbing preference for riding as many hills as they can cram in to a Saturday or Sunday morning. That was a great start for making the legs strong,” says Mark.

He was confident that he would finish – eventually – but less confident of hitting the time target he had set.

“I have ridden long distances before with quite a large group which makes things much easier. This was just Dan and I along with our on-ride coach. I took the view that if he thought we could do it, he’s probably right and it would be OK.

“It wasn’t a question of ‘if’ we would finish. It was more how much we would enjoy it and how long it would take.”

The biggest problems he encountered on the ride were bad weather and a dodgy chain.

“At first, the weather was awful. There was definitely a time when I was thinking that this is going to take a very long time and it would be utterly miserable all the way. That happened about a third of the way in amidst a strong head wind, heavy rain, horrible traffic and with a dodgy chain.”

But the the further north he got, the better the weather became.

“The sun came out, the chain started behaving and we found ourselves in The Midlands. Not as bad as The South, but obviously still not The North.

“It seemed the closer we got to Manchester the more the wind blew us along. As if a 100,000 Mancs were all looking to the south and breathing in to suck us along the A34 and home.”

Fuelled by McDonalds for breakfast, followed by chicken, lentil and barley soup for lunch, and chips, fish and curry for tea – ‘heaven’ – topped up with plentiful supplies of jelly babies and jaffa cakes whilst he was riding, he reached his last stop, Chelford Island – between Jodrell Bank and Alderley Edge – half an hour behind schedule, but feeling ‘really good and strong.’

“We knew we would finish. Heartened by a strong coffee, we sent Damian home in the support car, with the message ‘What could possibly go wrong.’

Mark headed down the A34/A6 to Manchester. Then, less than ten miles from home, disaster struck.

“We were flying when we hit the roundabout at the end of the A34/Kingsway. I took the opportunity to push hard to hit a gap in traffic and my chain snapped. Such was the pressure, it recoiled back, wrapped itself around the rear gear mechanism, exploding it into several pieces, whacked me on the back of the leg and entwined itself in the wheel, causing it to seize. A catastrophic mechanical fail, 205 miles in.

“But I was determined to finish, even if I had to go and rent a Mobike. As luck would have it, a call to faithful Damian resulted in him turning straight round and bringing the spare bike.

“We still finished only half an hour late so count it as a moral victory.   I think the gods of the south were just biding their time, but the plucky Mancs ran out winners.”

How difficult did he find it?

“It varied. From true murder, to ‘I’m loving this, we’re on fire’.  I suppose the training paid off.

Was there any point when he wanted to give up?

“No. One of the things our coach predicted was mental highs and lows. He told us that bodies are strong, but minds are weak and when we hit the lows to remember it’s mental, not physical. Which I suppose is pretty easy to say when you regularly ride 1000km in a weekend. But he was right. Always is. Annoyingly.”

Although his strength dipped during the ride, by the time he arrived at the Abel Heywood he was feeling good.

“There must have been something very dodgy in that coffee Dan gave us at Chelford. Perhaps he got it off Lance Armstrong.”

What advice would he give anyone who fancies doing the same ride?

“Get out and pedal, then pedal some more. Enjoy. It’s the closest thing to flying. You will be OK. The body is strong but the mind is weak. You will surprise yourself.”

Does he have any plans to do another?

“Will my wife be able to read this?  The answer depends on that. I have had a few accidents. One resulted in an early morning call for her and a week in Manchester Royal with bruising on the brain, broken collarbone and several broken ribs. I know she worries but tends to keep her views to herself. She knows it will fall on deaf ears. So publicly, no. Definitely not. Ever. Definitely.”

We think he might be fibbing. But don’t tell his wife.