Greater Manchester mayor Andy Burnham has marked his first year in office by restating his bold pledge to end rough sleeping in the city region by 2020.

He told an audience of local political and business leaders and representatives from the voluntary sector and faith groups that he was confident the commitment would be achieved.

The gathering to mark the anniversary – DevoDifference – was staged at the Sharp Project digital media complex in Newton Heath.

History was made a year ago when voters in Greater Manchester elected their first ever executive mayor – former Labour Cabinet minister Andy Burnham.

The mayor presides over a cabinet of Greater Manchester’s ten council leaders with powers over planning, housing, transport, policing and fire services and significant influence over the city region’s £6 billion a year health service budget. 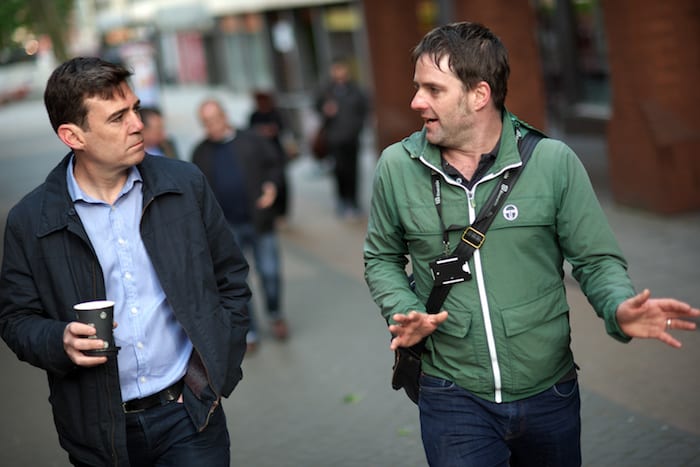 Sceptics at the time claimed the office had been foisted upon Greater Manchester by former Chancellor of the Exchequer George Osborne as a quid pro quo for devolving powers to the city region to drive forward the Northern Powerhouse initiative, but would make no difference. He insisted that there could be no power without responsibility.

Interviewed by I Love Manchester after the anniversary event, Mr Burnham said: “”While many expressed the view a year ago that the office of mayor would be a white elephant that would make little difference, the complete reverse is true.

“Of course I am as impatient as anyone else. I am heading a new administration which is still bedding in and not yet running at full speed. But we have made real progress on homelessness. We have built a movement with everyone pulling in the same direction. I am confident that from now on we’ll begin to see real changes.”

He admitted earlier this year that the rough sleeping problem had become worse since his election, having anticipated as much by saying: “I have said let’s see if we can end rough sleeping by 2020. If we can get three-quarters of the way there, am I going to consider myself a failure? Well, no.”

In February he launched a new draft plan to co-ordinate efforts to tackle homelessness based on what he called the four R’s: reduction, respite, recovery and reconnection.

The aim is to reduce the flow of people on to the street; deploy funds totalling £4.3 million to support respite projects; and introduce the new Housing First project across Greater Manchester to create permanent affordable housing, which currently has 200 places increasing to 500 by the end of the year.

As a former Labour government big hitter, Mr Burnham was a familiar face before he became mayor. But within three weeks of his election, his profile went global – not in the way he or anyone would have wished – as he led a measured, dignified public response to suicide bomber Salman Abedi’s callous terrorist attack on the Manchester Arena.

High profile or not, the mayor was soon confronted by the reality of how national governments favour infrastructure investments in London over schemes outside the capital.

Mr Burnham acknowledged the disappointment of the Department of Transport’s downgrade of rail electrification in the north followed within days by the go ahead for Crossrail 2 in London. He said: “I agree we have been a London-centric country for as long as many of us can remember – but there are signs of change. We came back strongly. The north fought back and that is only going to grow.

“The first Convention of the North takes place in Newcastle soon and our voice will be heard loud and clear on all the key issues including transport and Brexit.”

Leaving aside the disappointment over major rail investment, Mr Burnham’s transport priorities are on the move, including a key step towards delivery of smart ticketing and, from September, the halving of bus fares for 16-18 year olds – a step on the way towards provision of free passes for the age group.

His appointment of Olympic gold medal winner Chris Boardman as the region’s cycling and walking guru was also a bold statement of intent.

Less straightforward will be implementing his pledge to re-write the controversial Greater Manchester development masterplan for the next 20 years. It’s a classic housing and jobs versus green belt debate that is bound to upset some people however radical the rewrite.

There has been, however, a unanimous welcome for Mr Burnham’s ambition to make Greater Manchester the first UK city region to ditch single use plastic by 2020 in the wake of the shocking recent revelation that the River Tame, which flows through Tameside and joins the River Goyt to form the Mersey at Stockport, is the worst plastic-polluted river in the world.

But it’s the pledge to end rough sleeping that may be most difficult to deliver. Does he think he bit off more than he can chew?

“Good question,” he said, acknowledging that setting the target carried some personal and political risk to himself. But he claimed the government’s 2027 target “carries no urgency to make change happen”.

He added: “I have no regrets about my commitment….the challenge will galvanise action.”