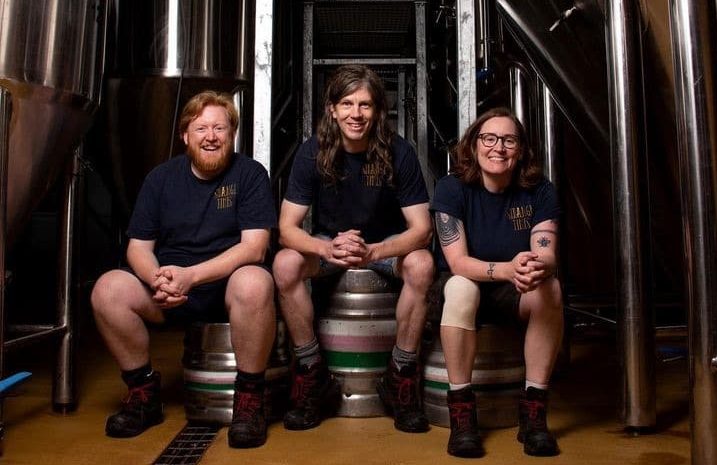 We all know Greater Manchester has an amazing brewery scene. Without doubt there is something for everyone with the fantastic and diverse selection on offer.

But Salford Brewers, Strange Times want to take our great beer national and show the country what we’ve got up here.

They have launched a crowdfunding appeal to raise £40K for an on-site canning machine that will allow the brand to distribute its products nationwide.

Enabling the brewery to start small-packaging its beers will mean it can launch an online shop and sell directly to the public while keeping its prices at a competitive rate.

Strange Times Brewing Co. was launched in Salford, Greater Manchester at the start of 2021.

Founder Alex Lord and Head Brewer Lauren Guy have a combined 25 years of industry experience between them, and have built up a loyal following of craft beer fans in the past two years which enabled them to hire Assistant Brewer Aaron Barton-Wells.

Like many businesses, Strange Times Brewing Co.’s growth expectations were somewhat impacted by the pandemic, however, the business has continued to thrive in difficult commercial conditions.

The brewery offers a range of classic and varied core beers, all of which are vegan.

Alex and Lauren have known from the start that they wanted to can their beers and have put huge amounts of work into the creative side of the business to ensure their products will stand out on the shelf.

“We launched at the start of 2021 and couldn’t have expected how quickly we’d build such a strong following and we’d love to see more supporters enjoying our beers.

“This crowdfund will help us sell Strange Times Brewing Co. beers nationwide which is a vital next step for the growth of our business.”

The £40K crowdfund is a reward-based campaign that will see supporters receive different benefits based on the amount they donate:

If the crowdfund surpasses its target, these funds will go towards the creation of local job opportunities within the business to further widen Strange Times Brewing Co.’s customer base.

The brewery’s future goals include opening a small onsite shop to sell beer and merchandise to the public face-to-face, and to contribute to the local community by organising more events and tours at its brewery site in Salford.

The brewery say they celebrate creativity from all aspects of their work, from recipes of their beer to the amazing packaging that has been designed by artist Mina Mond, inspired by tarot cards.

The meanings of these tie into the stories of each of its five signature brews, and specialty recipes that will be launched throughout the year.

You can find out more at their website by clicking here.