Michael ‘The Count’ Bisping was announced by the familiar voice of Bruce Buffer for possibly the last time on Saturday evening at the O2 Arena when it was confirmed the Clitheroe-born fighter would be the latest addition to the UFC Hall of Fame.

Nobody from the UK deserves the honour more than The Count who has accomplished more than most other fighters over a fifteen-year career.

Fighting “out of Manchester, England”, he is the first and only British UFC Champion with twenty career victories in the UFC.

Making his MMA debut in 2004, an impressive 10-0 record earnt him an invitation to season 3 of The Ultimate Fighter in 2006. 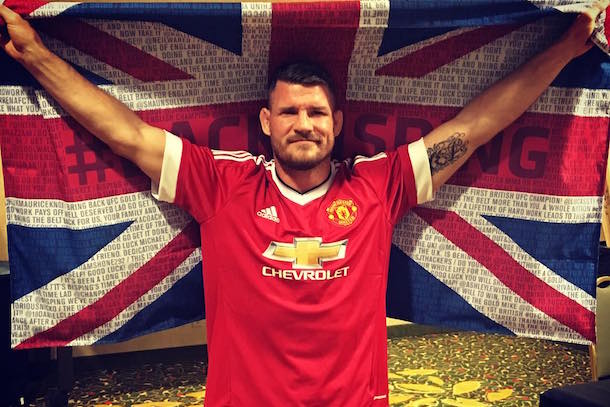 Announcing himself on the biggest MMA stage in the world, he defeated Josh Haynes in the final to earn a six-figure contract with the UFC.

His first defeat was at UFC 78 to Rashad Evans when he became the the first UK fighter to ever headline a UFC main event.

The loss would see Bisping drop down to middleweight where he scored victories over some of the UFC biggest talent including Chris Leben, Yoshihiro Akiyama, Brian Stann, Cung Le, Thales Leites, and the legendary Anderson Silva.

The Anderson Silva victory at London’s O2 Arena in 2016 was probably one of the most significant moments of an illustrious career.

Having defeated Silva he was invited to face the then champion Luke Rockhold on seventeen days notice.

Having previously already lost to Rockhold and fallen short chasing the title chance on several occasions, he had no hesitation agreeing to the fight.

In typical Bisping fashion the lead up to the fight was full of trash talking from two fighters who do not like each other.

Bisping did what nobody in the fight world had predicted and knocked Luke Rockhold out in the very first round.

The victory cemented his long road to achieving what no other British MMA fighter had accomplished – to hold a UFC Championship belt.

Four months later, in his first and only successful title defence, he would avenge another loss and defeat Dan Henderson.

The fight was an all-out-war which gave the fans everything they had paid to see with Bisping getting the decision.

That victory saw Bisping become the first fighter in UFC history to record twenty wins inside the Octagon.

Struggling with eye issues following his fight with Vitor Belfort in 2013, he announced in 2018 he had started having issues with his good eye.

After over a decade fighting at the elite level, Bisping called time on his career in 2018.

That announcement came following a knock-out defeat to Kelvin Gastelum inside three minutes of the first round.

That was a fight many felt Bisping should not have been cleared for in the first place. Three weeks earlier he had lost his middleweight title to George St-Pierre in another spectacular back and forth battle.

Never one to turn down an opportunity, Bisping stepped in when UFC made their China debut in Shanghai after Anderson Silva failed a drug test.

Speaking on his Believe You Me podcast, Bisping gave the official news and reasons for his retirement from the sport which he loves so much.

“You can’t do it forever. I’ve done it for a long time, and of course I’ve got issues with my eye. After the Gastelum fight, I started having issues with my good eye, which I’ve never spoken about before.”

There is no denying that throughout his career his trash talking and occasionally his behaviour has divided opinions.

The one thing not up for debate is his tireless, gritty work ethic, a ridiculous cardio output and his willingness to step into the Octagon whenever and wherever required.

It was a good call to retire from such a competitive sport when he did and it is great to see him as a UFC analyst and pursuing other avenues.