Three distinctive ‘character’ areas in the neighbourhood have been designed to create a rich and diverse environment for visitors, workers and residents to escape their daily routine.

The first, and possibly the most striking, will be a beautiful grassed area framed by mature and urban-friendly plane trees, and pocket gardens while a low rise pavilion underneath will feature singular and ever changing events throughout the year. This inviting space, surrounded by a ribbon of restaurants, cafés, bars and shops, will be alive from morning to night.

Alongside the River Medlock, a walk will bring beauty, greenery and wildlife to Circle Square as it becomes a riverside park with new paths and spaces that will reconnect this part of the city with the river. It will create a tranquil space away from the bustling streets with the water, native planting, reflective garden spaces nurturing a diverse range of species, such as bees, butterflies and other insects rarely found in urban places. 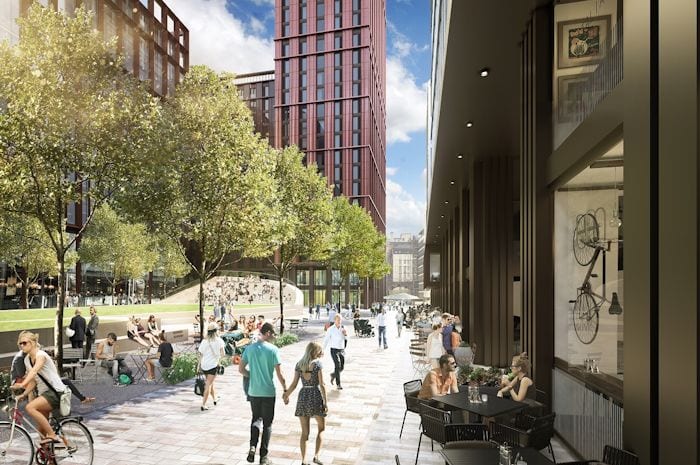 Finally, there will be a green street close to the river, with trees and shrubs running the length of it, smaller in scale and full of character with independent shops and restaurants, pocket gardens and relaxing outdoor seating areas for people to get together.

“From the very start, the partners behind Circle Square had a clear vision of what it wanted to be – diverse, innovative and extraordinary,” says Ed Lister of Planit-IE, the landscape architects helping to create Circle Square. “Our role throughout the design process has been to capture this ambition and create a canvas capable of hosting and framing the memories of residents, workers and visitors for years to come.

“The creation of a generous green space at the heart of the development and new riverside park will help to define the neighbourhood, whilst also making a significant contribution to Manchester’s wider green infrastructure.”

“It is widely recognised that there is a direct correlation between a person’s living and working environment and their health, happiness and overall wellbeing,” says Paula Brockwell of business wellbeing experts Robertson Cooper.

“We have carried out research which show that integrating green spaces and natural elements can significantly impact on energy levels, productivity and creativity so it is fantastic to hear this is happening in Manchester at Circle Square.”

Developers Bruntwood and Select Property Group are supporters of City of Trees, a movement aimed at reinvigorating Greater Manchester’s landscapes by planting a tree for every man, woman and child who lives there.

They say the site of the former BBC building on Oxford Road will provide a colourful place for living, working, shopping and socialising unlike anywhere else in the city.

To celebrate the unveiling of the landscaping plans, the Circle Square team will be giving out flowers to passersby at Manchester Technology Centre on Oxford Road on Wednesday 13th July at from 12noon until 3pm.