With city centre living becoming a more and more attractive proposition for students and business people alike, and an incredible 97% of residential properties in the city centre already occupied, Manchester needs 55,000 new homes in the next 12 years to satisfy demand. Hence the creation of new communities like New Islington.

‘the only new city centre apartments
being launched this summer.’

But following a crippling recession, even Manchester struggled to maintain the growth it had experienced over the last decade. When the first phase of Milliners Wharf was completed, the UK was in the darkest depths of the financial crisis and there was a danger of the project failing to attract buyers.

The picture is certainly much rosier now. The construction of a new Metrolink stop has bolstered New Islington’s appeal. The sheer scale of the development is staggering. Up to 2,000 new homes and commercial spaces with an array of restaurants, shops, and bars with a gross development value of £575m are expected to take up residence over the next 5-7 years.

Milliners Wharf has entered its 2nd phase with the £30m ‘Hat Box’ development, the only new city centre apartments being launched this summer. Hat Box will provide 144 contemporary, hi-spec apartments with the first 1,2, and 3 bedroom apartments expected to be completed in early 2016. 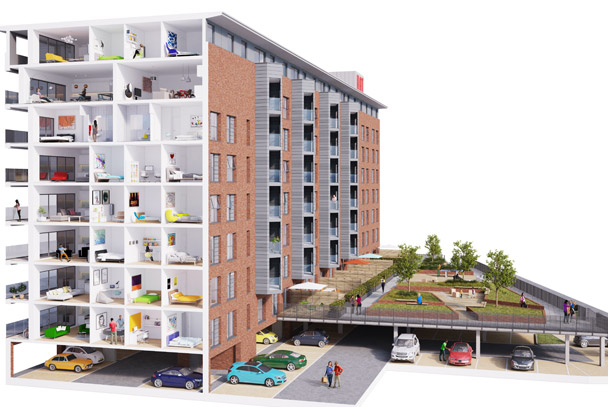 The apartments are aimed at owner-occupiers-anyone from young professionals, international students, families, ‘empty nesters’ or first time buyers. There’s something for everyone. Most of them benefit from a balcony or private terrace with views of the Pennines. They all have access to the communal Sky Garden with table tennis, oversized chessboard, seating and BBQ areas included.

New Islington’s growing potential seems to mirror its quirky neighbours, the Northern Quarter and Ancoats, which have seen much redevelopment in recent times. Walking around the site you immediately get a community vibe, which can be a rarity in such a build. But not here, which is pretty refreshing to say the least. Everything the city centre has to offer is on your doorstep plus all the benefits of the green open space and canals.

The sales suite launch next month will give prospective buyers a taste of what’s to come.