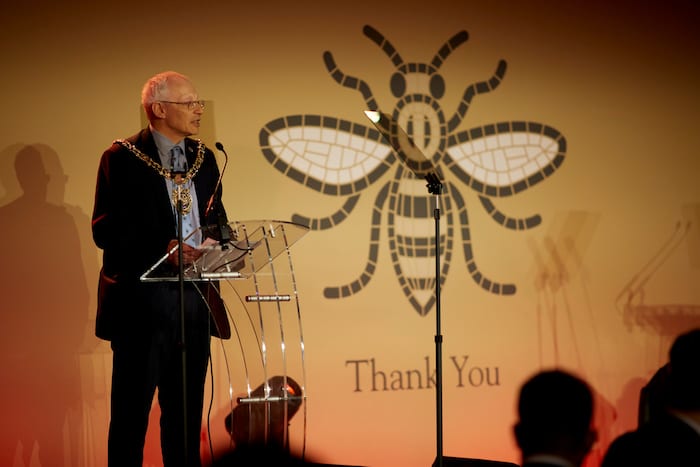 The Great Hall in Manchester Town Hall was filled once again with some of the city’s most inspirational people for an evening dedicated to awarding their commitment to the city and community.

This year’s event included a special category to honour the people and organisations who pulled together in response to the attack on Manchester Arena that took the lives of 22 people, and injured and traumatised many more on May 22 this year.

Alongside the usual accolades for Community Project of the Year, Neighbour of the Year and Young Achiever of the Year, seven Special Recognition awards were given to those whose actions in the aftermath of the attack deserve special honour.

According to Councillor Nigel Murphy, who presented the awards, the sheer range of contributions from individuals and organisations across the city rendered it impossible to choose just one recipient.

“Whether it was through demonstrating incredible courage by helping those in need at the scene of the attack, or by showing exemplary compassion for those affected in its aftermath, these people truly represent the best of Manchester and the awards underline our gratitude for their remarkable response at the city’s hour of need.”

Four of these awards were given to those who put others before themselves and literally ran towards danger to attend to casualties in the immediate wake of the attack.

These included off-duty doctors Matthew Burrows, David Dolan and Vyki Wijeratne, who had attended the Ariana Grande concert and re-entered Manchester Arena to administer treatment to the wounded as soon as they realised what had happened.

Other recipients of awards were arena first-aiders Emergency Training Ltd, the platform staff at Manchester Victoria station, and crowd management specialists Showsec Ltd, who all stayed to safely evacuate the arena until the early hours of the morning.

Staff from Northern Railway also stayed long into the night to help casualties and assist with first aid. A colleague who nominated them said: “I am immensely proud of the guys who were at the Arena on 22 May and helped the people who were there, without thought for their own safety.”

Manchester residents Beth Clarke and Nicholas Franklin received awards for their creative responses to the tragedy. Beth had the idea of asking people to make hearts to be given to people in Manchester in the aftermath of the attack.

Sharing the hashtag #aheart4manchester on social media, more than 26,000 hearts came flooding in from all over the world to be distributed to survivors of the attack, emergency services staff and to members of the public in Manchester city centre.

Artist Nicholas meanwhile contacted Coronation Street bosses with the somewhat unusual request for tiles from the walls of the ‘Rovers Return’ pub.

He then painted 22 tiles with a Manchester bee and auctioned them online, raising more than £30,000 for the We Love Manchester Emergency Fund.

The Khizra Masjid mosque, which became a drop-off centre for emergency services and provided hot drinks and shelter for anyone in need of a safe place on the night of the attack, also received an award.

“Through their desire to help others and their positive, can-do spirit, tonight’s award winners and finalists are all making a massive difference to the places they call home, day in, day out,” said Cllr Murphy.

“They thoroughly deserve to be recognised as true champions of their communities and the Be Proud awards show just how much we appreciate the way in which they make Manchester a better city for everyone around them.”