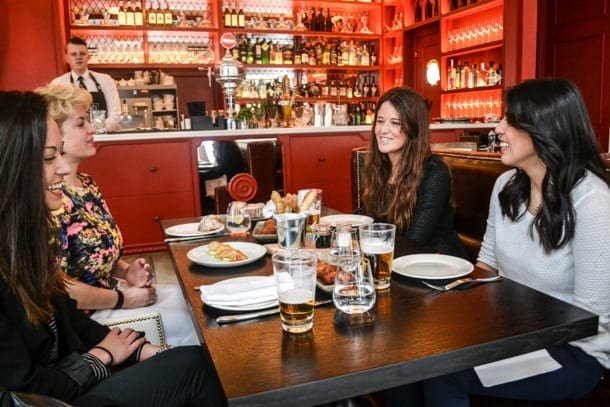 Everybody loves Manchester. Growth in outlets across Manchester and Leeds exceeds the capital as the North’s largest hospitality trade show announces over 270 exhibitors and a host of international speakers.

Figures from leading leisure consultants CGA Peach show that the percentage growth in the food and drink sectors of some major Northern cities has left London in the shade, a trend which has pushed industry trade show Northern Restaurant & Bar (NRB) to record-breaking levels. NRB, which takes place at Manchester Central on 17 and 18 March, covers 50,000 sq ft and has seen exhibitor numbers jump 15% to 270, with the event’s NRB Top 50 awards and NRB Debate also requiring increased capacities.

CGA Peach’s most recent figures cover the last decade and show that Manchester city centre posted the UK’s biggest jump in food led businesses such as restaurants, gastropubs and café-bars with a 57% increase. Leeds also posted a huge rise of +55% whereas Liverpool had figures of +31%, comparable to London’s growth of +32%. The surge of interest and investment in the North of England shows no sign of abating, with leading operators from the capital such as Hawksmoor, Iberica and Meat Liquor rushing to open venues across the region.

With Northern Restaurant & Bar now fifteen years old, CEO Thom Hetherington is delighted the exhibition is serving a booming industry. “The North has always punched above its weight in terms of food and drink, but it seems that the rest of the world has finally woken up to its strength and potential.”

He continues, “Northern operators are thriving, the audience of diners is growing and big names are rushing to embrace the region. Our job is to make sure Northern Restaurant & Bar itself continues to reflect this surge of commercial and creative vibrancy.”

The exhibition’s growing profile has attracted international speakers, including Nacho Manzano, the three Michelin starred Spanish Exec Chef of Iberica, and Jim Rutledge, Master Distiller of Four Roses, awarded the title of “Best US Whiskey Distillery’. Despite the global flavour NRB keeps it’s Northern soul with demos from chefs including Kenny Atkinson House of Tides, Newcastle) and Michael O’Hare The Man Behind The Curtain, Leeds) as well as a host of proud regional suppliers such as HG Stephenson, R Noone & Son’s fresh produce and Inka Charcoal Ovens. Also on site is a VIP Cocktail bar courtesy of Manchester’s Mr Cooper’s House and Garden, which recently made the Gold List in the prestigious Conde Naste Traveller magazine.

The exhibition itself is 15% bigger this year, and all of the usual features and programmes will be refreshed and enhanced, from the Spirit Room and Drinks Live to Market Kitchen and a new Craft Beer Quarter, as well as the strongest ever NRB Top 50 Awards. The second NRB Debate promises to be a star of the show with award-winning author Nick Lander discussing his book, ‘The Art of the Restaurateur’, with Craig Bancroft of Northcote and Will Beckett from Hawksmoor. No wonder Hetherington says “We are now not just attracting Northern operators, but also the London guys wanting to see what’s going on up here.”

Northern Restaurant & Bar once again forms the hub of Northern Hospitality Week (NHW), five days of class-leading industry debates and special one-off business events. As well as the exhibition, the NRB Debate and the NRB Top 50 Awards, Northern Hospitality Week includes industry charity dinners such as Action Against Hunger’s Too Many Critics, a host of industry association meetings and visitor discounts and special offers in bars and restaurants.